Crush releases more teasers for his upcoming album ‘none’

Crush releases more teasers for his upcoming album ‘none’

On 15th October, Crush released a full version of the video teaser and some image teasers for ‘none‘.

CHECK OUT THE VIDEO TEASER:

In the album teaser, Crush played his piano while singing to a song. The lyrics he sang to are about missing someone and the inability to stop thinking about her. Then, another Crush appeared and also sang to the song.

It is worth noting that the full album teaser this time added a Korean title of ‘none‘, which has the same pronunciation with the English word ‘none‘ but with a meaning of “You” in Korean.

The album teaser ends with two ‘Crushes’ standing next to a long play player. It also showed that the full album will be released on 17th October at 6 PM.

Besides, Crush also released some image teasers on his official SNS accounts. 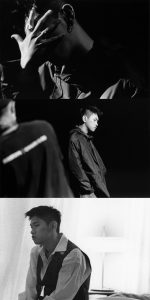 The image teasers are all in black and white filters, which shows a relatively solemn side of Crush. This has made fans more curious about the concept of his album ‘none‘,

Are you excited for Crush‘s new album? Let us know and comment below.