Dal Shabet‘s comeback is just days away and the girls continue to tease fans with short videos. This time, it’s the highlight medley for their upcoming mini-album.

This will be their 9th mini-album and it will be titled ‘Naturalness.’ The tracklist was released a few days ago and shows that there will be 7 tracks on the mini-album:  ‘Gently,’ ‘Someone Like You,’ ‘From Head To Toe,’ ‘Nice Guy‘, ‘Dreams Come True,’ ‘Because You Said You Love Me,’ and the instrumental of ‘Someone Like You.’ Each of the four members, Subin, Serri, Ahyoung, and Woohee, have solo songs. This mini-album also contains a song featuring Sims. 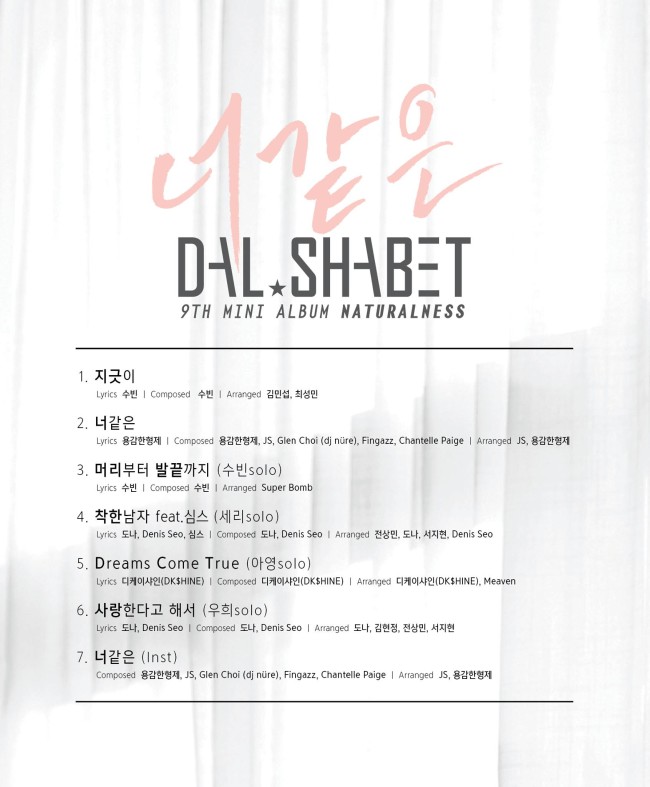 Many of the songs as heard in the highlight medley video have a more soft and mellow sound. These songs seem to suit their natural concept very well.

The mini-album will be released on January 5th which also marks Dal Shabet’s fifth year anniversary. This will be their first comeback as a four-member group following the departure of former members Jiyul and Ga Eun.

Are you excited for Dal Shabet’s return? Be sure to listen to the highlight medley and let us know which song do you like the most!

Scroll for more
Tap
Editor’s Choice: Morgan’s Wild Card of 2015
Dal Shabet Want ‘Someone Like U’ In Their Upcoming Comeback
Scroll
Loading Comments...