Day6 continue their series with ‘The Book of Us: Entropy’ trailer film and track list Day6 continue their series with ‘The Book of Us: Entropy’ trailer film and track list

Day6 will be making their comeback on October 22nd! They will be releasing a full album called ‘The Book of Us: Entropy‘, which is a continuation from their summer comeback this year ‘The Book of Us: Gravity‘. The band are going for a physics concept this year. “Entropy” is a term used in physics to describe something’s chaos. This connects with the title track, which is ‘Sweet Chaos‘.

The comeback was announced with the release of a trailer film and soon after the track list was released. Check them out below!

The trailer film takes the format of an animation. A lone figure, who is supposed to symbolise the viewer, squats in the middle, holding a beating heart in their hands. Matching the beat, the heart represents different entities such as another me, soul, life, etc. In the top left corner, an outline of a flame appears. This flame represents entities like energy, heat and love. It suddenly flies into the heart and lights it on fire. Then, the name of the title track appears. Within a black square, different scenes are shown, including the flame, heart and person spinning around. The phrases “I’m losing control, but I like it” are also visible. In the next scene, the lone figure is now surrounded by plants and flowers. A healthy lifeline beats underneath it.

It looks like this comeback will be emotional and sentimental. 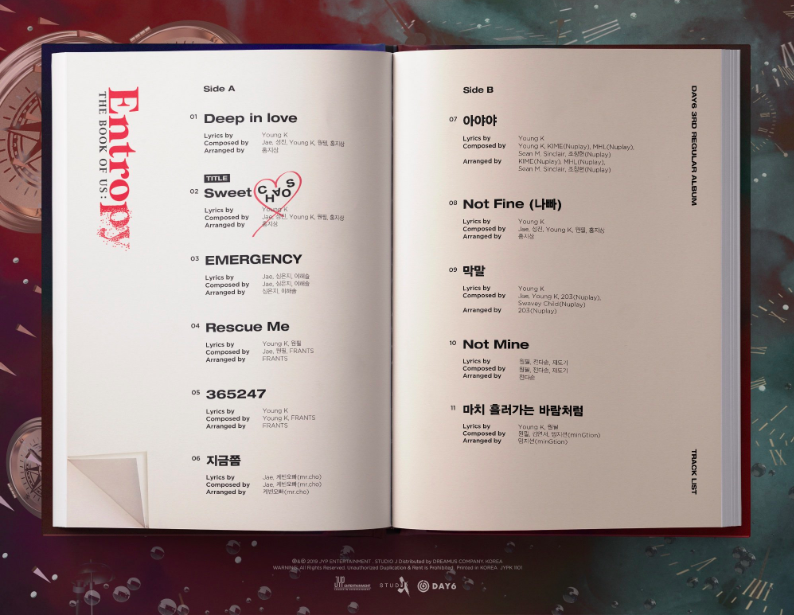 There are 11 songs in total. The members took part in the composition and production of all the songs.

What do you think about Day6‘s teasers for ‘The Book of Us: Entropy‘ so far? Let us know in the comments below.