DIA continues to drop individual image teasers. This time, it is of Jenny and Huihyeon. Another thing is they have revealed the tracklist. So, check it out below!

Huihyeon is looking quite doll-like in her images. She looks great in her outfit, giving quite a straight intense look towards the camera. The background itself blends nicely with the colour, bringing an overall good sensation.

Meanwhile, Jenny looks utterly adorable in her outfit. With her short hair, she shows just how great she looks with the new look. She is wearing a shirt with a rainbow, showing off her cute charms. 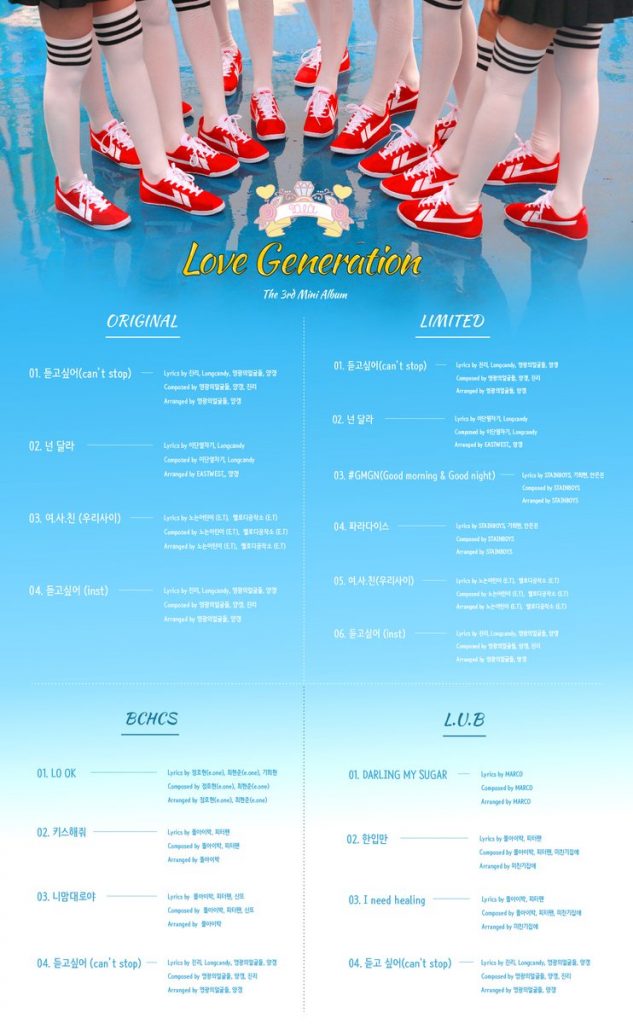 The tracklist has also been revealed. It looks like there is quite a few versions of their mini album. There will be an original, a limited and two unit albums! In each album will feature some tracks but not all! However, in total, there will be eleven tracks. That includes the title track, ‘Can’t Stop‘ and its instrumental version, ‘You’re Different‘, ‘Female Friend‘ and ‘GMGN (Good Morning Good Night)‘. The other tracks are part of the subunit versions including BCHS‘ ‘Kiss Me Please‘, ‘LO OK‘ and ‘As You Wish‘. The other subunit, L.U.B‘s track includes ‘Darling My Sugar‘, ‘Just A Bite’ and ‘I Need Healing’.

BCHS consists of Yebin, Jung Chaeyeon, Ki Huihyeon and Eunice. The other subunit, L.U.B, consists of Jenny, Eunjin and Eunchae.

There is a whole lot of tracks that fans can look forward to. Are you excited to see what the girls will showcase? Let us know in the comments below! DIA will make their comeback with their third mini album, ‘Love Generation‘ on August 22nd!

Scroll for more
Tap
HyunA marks her comeback with first image teaser
Red Velvet is the next to participate in SM STATION season 2!
Scroll
Loading Comments...