‘Go Ho’s Starry Night‘ is a mini series chronicling the ups and downs of an almost 30, Go Ho, played by Girls Generation‘s Yuri. 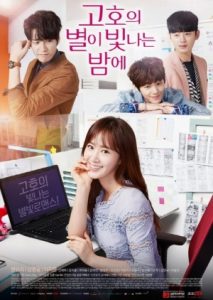 A year and a half after a bad break up, Go Ho’s mean boss transfers her to  a new team in an advertising company. Her new boss is none other than her ex-boyfriend. She writes articles to compensate balancing new and old romance by ranking the guys who approach her in a star system.

Kim Young Kwang stars as the ill-tempered Kang Tae Ho, who has a hidden side. And Lee Ji Hoon stars as the cold-hearted ex boyfriend Hwang Ji Hoon. There’s plenty of fun cameos from the cast of ‘Pinocchio,‘ which starred Kim Young Kwang. Guest appearances include Lee Jong Suk as an actor that Go Ho and Ji Hoon have to recruit, Park Shin Hye as an adorable cashier, Yoon Kyun Sang as a police officer, and not to mention Shin Jae Ha as the adorable Oh Jung Min! 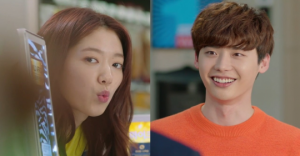 The web-drama was a Chinese-South Korean collaboration with Sohu TV and aired every Saturday and Sunday from July 2, 2016 to August 19, 2016.

This mini series was absolutely adorable and definitely a must watch. I fell hard for Young Kwang’s character and the chemistry between the two leads was absolutely amazing. I loved that they included the co-stars from ‘Pinocchio’. Each character had their own developments despite it being a mini series. Go Ho became less heartbroken and more empowered and the male characters showed much softer sides. each character also got their own little backstory, even the third, fourth, and fifth leads! I adored the show and it was a great pick me up after a stressful day, and left me wanting more each episode. The ending was extremely satisfying and didn’t leave any questions unanswered.  The drama is perfect to binge or or if you need something to perk you up. Since it’s a mini series, it’s 20 episodes long which each episode being 20 minutes or less. But don’t be hesitant because of the length, it’s still a very fulfilling drama none the less!

It was cute, sweet, and a great length for what it was. As Go Ho would say it’s got 5 stars from me!