Drama Review Corner: ‘Legends of the Blue Sea’ Episodes 3 And 4

Drama Review Corner: ‘Legends of the Blue Sea’ Episodes 3 And 4 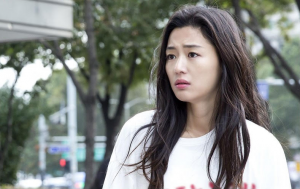 Cameos, cameos, and more cameos in episodes 3 and 4! So our mermaid finally makes it to the big city of Seoul and has already encountered the many wondrous the city has to offer. But talk about hilarious and scenes and scenes that make you go OMG! 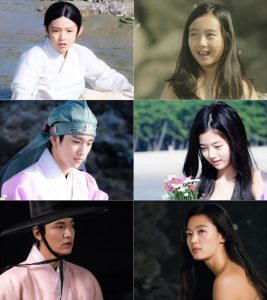 Episode 3 finally gives the back story as to why Heo Joon-Jae didn’t harm our mermaid Sim Chung. She tells him the story about a boy falling in love with a mermaid. It’s revealed that the young boy, Heo Joon-Jae, which is played by GOT 7 Jin Young couldn’t be with her because she couldn’t gain her legs until she was an adult. Heartbroken because Heo Joon-Jae couldn’t be with her and was soon getting married, she decided to wipe his memories. Revealing that Heo Joon-Jae and Sim Chung have known each other way before and have a much deeper connection. 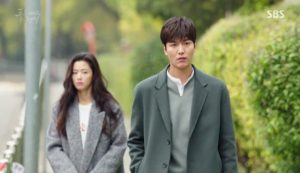 Fast forward to the present, Heo Joon-Jae’s memories are completely wiped out and he doesn’t remember a thing. His partner in crime tells him about the woman he met in Spain and the Jade bracelet he hasn’t taken from her. Heo Joon-Jae thinking his friend might be crazy and didn’t believe a word. But he keeps having Deja-Vu when he hears or sees something familiar. Finally Jo Nam-Doo shows him the picture of him and Sim Chung shaking hands with the pastor in a cathedral in Spain. 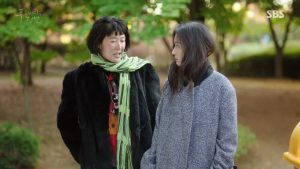 1st cameo: if you were a fan of ‘My love from another Star’, than you must know our Gianna Jun who is a longtime friend Hong Jin-Kyung. The two reunited as two beggars (well Hong Jin-Kyung was the real beggar) but nevertheless fans got excited after seeing these two friends reunite as two homeless woman searching for love and their dream. It was a quick cameo but fans enjoyed it. 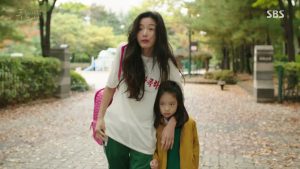 To add more to the hilariousness for our mermaid, she learns how to mug people from a couple of High School girls. Talk about a fast learner. But what made it so hilarious was she mugged a toddler who is played by the lovely child actor Shin Rin-Ah. And boy did that little girl put her in her place and taught her about how robbing people isn’t right. Good job little girl! 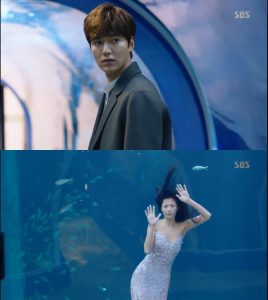 Sim Chung ends up in a aquarium where her beggar friend told her that Heo Joon-Jae will definitely be there. Our mermaid loves the idea that she has a place to sleep and food to accompany her until Heo Joon-Jae  arrives. We find out that our main protagonist heads to the aquarium every year for his birthday. It’s revealed through a flash back that his mother used to take him there. There he sees the woman that has been hunting his subconscious mind. 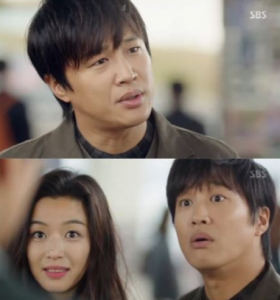 2nd Cameo: if any of you guys haven’t seen ‘My Sassy Girl’ than you must, it’s one of the best romantic comedies of all time. But it was this particular cameo that had fans screaming with joy when Cha Tae-Hyun appears as a fake shaman. His cameo made the scene even more hilarious when he was trying to swindle our poor Sim Chung, but don’t worry guys our knight in shining armor, Heo Joon-Jae came to the rescue. 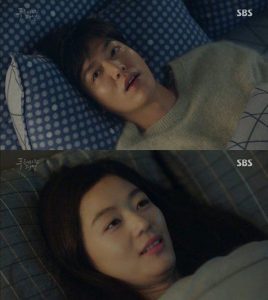 Heo Joon-Jae takes our mermaid to his place to stay the night. This doesn’t fly well with our antagonist Cha Si-A. Again, talk about the cameos in this episode! Lee Ji-Hoon makes an appearance by playing the step brother, which we don’t know much other than he is the son of Heo Joon-Jae’ father. So, we don’t whether this character will be good or bad. 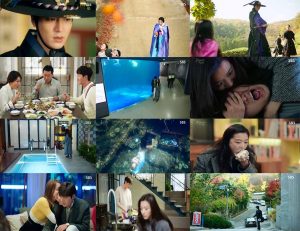 With the flash back of Sim Chung, it is revealed that mermaids have a weak spot and it is their legs. Mr. Yang tried to use his hit-man to capture the mermaid and injure her by scratching/cutting her legs.

Fast forward to the present, Ma Dae-Young aka Mr. Yang  is a serial killer who is hired by Heo Joon-Jae’s step mother. Like most K-drama mothers, they want the power for their son and not someone else. We end our episode with Sim Chung answering the door to Ma Dae-Young. Talk about suspense, but towards the end there is a hilarious scene as to why Kim Sung-Ryoung’s husband and herself feel so submissive towards Mo Yoo-Ran, the housekeeper. She so happens to be Kim Sung-Ryoung’s former master.

Now I can’t wait for next week and who will be the next cameo for the next two episodes. ‘Legends of the Blue’ is taking the ratings by storm and many people have been praising the chemistry between Gianna Jun/Jun Ji Hyun and Lee Min-Ho.

Are you guys excited for next week episode? let us know in the comment box below!