Eun Hwan Ki is extremely introverted, he dresses in dark clothes and always wears a hat to hid his identity which doesn’t exactly work when you’re the CEO of a public relations company. Hwan Ki is plagued by the death of a secretary and with the fact that he can’t interact with people. Chae Ro Woon is the complete opposite of her new boss, she’s extremely outgoing and outspoken which tends to get her in some sticky situations but she’s committed in exposing Hwan Ki for the suicide of her sister, and find out the truth on what lies behind the penthouse doors of Brain PR. 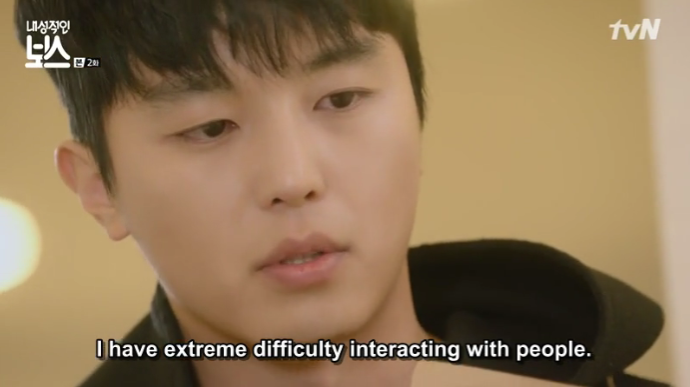 I absolutely adore this show! Hwan Ki is extremely precious and it’s so hard not to absolutely adore him (and relate to him just a tiny bit). While the drama is slightly over done at some points, the story is well executed. I was quite shocked at the dark edges when the trailers seemed so light-hearted, but I think it adds to the show itself and truly allows the viewer to be engaged. I am in love with the main characters and I’m really excited to see where this will go, and what unfurls as Ro Woon dives deeper into the heart of Hwan Ki.

It’s a definite 9/10, I had to take 1 point away for the over dramatics in the first episode but this show is amazing otherwise!

What did you think of the premiere of ‘My Shy Boss‘? Let us know in the comments below!

To keep up with all things Hallyu be sure to follow Officially KMUSIC!