After E-Sens‘ departure from Supreme Team, many was wondering if the rapper will perform the group’s song as a solo artist. However, he ensured that he does not plan to do so.

He wrote on his Twitter, “To all the fans who have supported Supreme Team, thank you so much. Since we’ll be going on our separate paths, I’m not sure when we’ll have the opportunity to perform together again. However, I will not be performing Supreme Team songs on my solo stages. I would hope that everyone would wish us good luck on our future solo careers.” 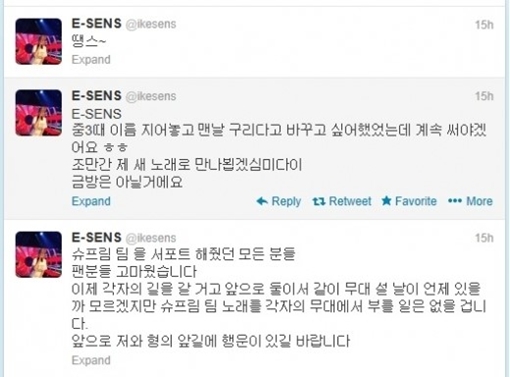 E-Sens also took his time to reminisce about the beginning of Supreme Team and his music career, saying, “E-Sens was a name I came up with in middle school and I’ve always wanted to change it, but I think I’ll keep using it. I look forward to showing you my new material soon. It probably won’t be anytime soon though.”