The preview is titled ‘Album Self Spoiler’, and gives fans a quick preview of all six tracks to be released on ELRIS‘ second mini album. Take a look below.

The spoiler video sees three members of the group – Karin, Hyeseong, and Sohee – sneak into a producing studio to give their fans a sneak preview of their new tracks.

All six songs sound upbeat and cheerful, fitting in perfectly with the title of their mini album, ‘Color Crush‘! The members save the preview of their title song ‘Pow Pow‘ until last. The girls describe ‘Pow Pow‘ as being a ‘powerful’ song, with the ability to surprise those who listen to it.

The five-piece girl group also released their official tracklist on September 4. Featuring a pink colour scheme, it is sure to put a smile on the faces of fans of the group.

Check out the ELRIS tracklist below: 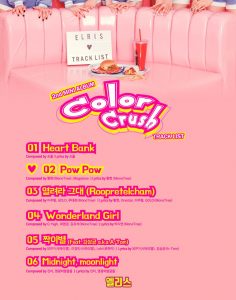 ELRIS will be making their comeback on September 13.

Follow Officially KMusic for the latest news in all things KPop!

Scroll for more
Tap
Gfriend looks lovely in the ‘Summer Rain’ MV teaser
GOT7 drops the next ‘UNIT’ teaser for ‘Turn Up’!
Scroll
Loading Comments...