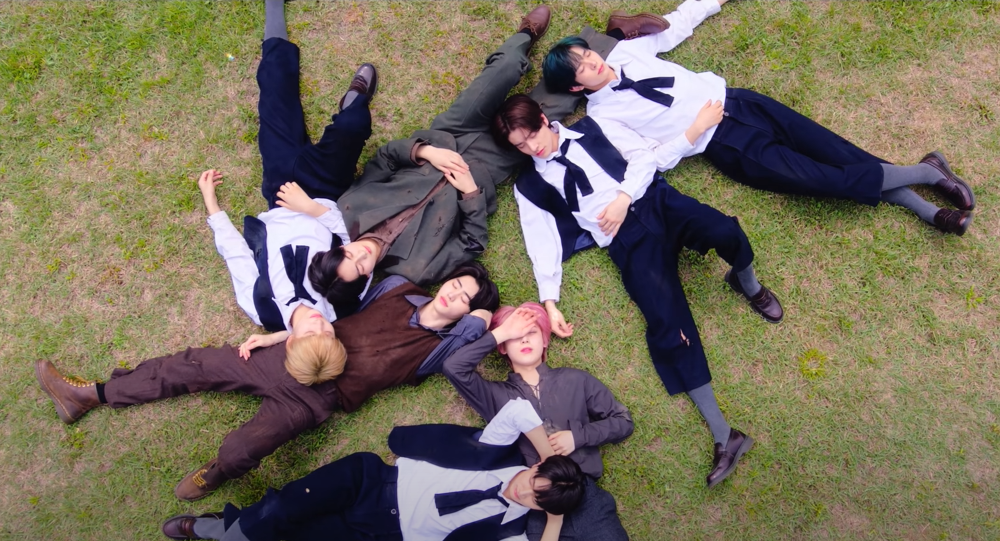 On October 12th, rookie boy group ENHYPEN revealed the music video to their new title track, ‘Tamed-Dashed’. The song comes off their 1st full album, ‘Dimension: Dilemma’. With this being the first album preceded with ‘Dimension’, this marks the potential start of a new series of releases following their past two ‘Border’ EPs. This new album contains eight new tunes. This includes a collaboration with fellow HYBE labelmate, TXT‘s Yeonjun on the 6th track, ‘Blockbuster’.

Lyrically, the lead single takes on the tug of war between being tamed or dashing towards your desires and wants. Wrapped in a summery instrumental, the new wave song fuses modern electronic elements with retro dark synths to manifest an upbeat yet grounded song. The vocals are nicely layered and tight especially in the chorus to give a light airy feel, gliding across the track.

In the first scenes of the music video, we see the members crowd around the school to come together preparing to play rugby. They one by one gather in the school hall ready in formation. As the chorus kicks in, we see their improv synchronization as they perform the choreography. It is full of energy, making sudden stops to emphasize certain movements. The catchy ‘NA NA NA’ matches with the easy to follow sliding dance that goes along with that line.

Now playing the game, the ball flies near the school building before suddenly stopping mid-air. It then gets dragged down as the video transitions out of the school field to the ball on a sandy beach. Hanging and mucking around at the beach, we snap to a grassy opening. As member Sunoo stands alone, the members reveal themselves behind umbrellas. The MV concludes with the youngest member Ni-Ki in a similar grassy forest-like area , picking up the rugby ball from the ground and walking off screen.

How do you feel about the boy group’s new comeback? Let us know in the comments below!

Scroll for more
Tap
SUNMI bring us to the future in her ‘Go Or Stop?’ MV!
LIGHTSUM are lively in their 1st comeback ‘VIVACE’ MV!
Scroll