Epik High has revealed the tracklist for their upcoming collaboration album ‘Lost Map 2’.

‘Lost Map 2’ is a follow up to the first ‘Lost Map’ mini album that was released back in 2009. The tracklist reveals that five songs will be on the ‘Lost Map 2’ album, including ‘Ok Good,’ ‘Wonderland (Tablo’s Word),’ and ‘Highrise (Mithra’s Word).’

‘Abboretum’ is a track composed and arranged by Epik High member DJ Tukutz and features MYK, who previously collaborated with Epik High for the first ‘Lost Map’ mini album. Lastly, there is the track ‘Love Story,’ which will be a piano version by Younha. 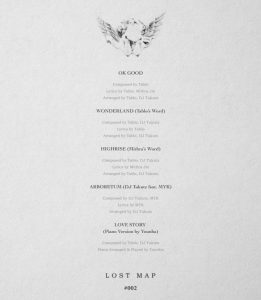 As fans prepare themselves for the release of ‘Lost Map 2,’ they will find a lot of joy when they hear why member DJ Tukutz has temporarily changed his stage name!

Fellow member Tablo was making a special DJ appearance on SBS Power’s radio show ‘Cultwo Show.’ During the show, a listener asked Tablo who Epik High’s “Sukutz” was, in an unfortunate mispronunciation of DJ Tukutz name.

Sukutz in Korean sounds similar to the word for male. Apparently, DJ Tukutz found this hilarious and messaged the radio show with a wager. He said that if the Epik High concert becomes number 1 on real-time search rankings, he would change his stage name to DJ Sukutz during the month of July!

According to Tablo, there was no particular reason DJ Tukutz went for this stage name, he asked for his fellow band members help and they told him to go with Tukutz.

Either fortunately or unfortunately for DJ Tukutz, ‘Epik High Concert’ did indeed become the number 1 trending topic, meaning that he had to stay true to his side of the deal! DJ Tukutz stage name was updated to Sukutz on his official SNS pages, as well as YG Entertainment’s website and its portal sites!

As this began to unfold, Tablo remarked that he had never seen DJ Tukutz this popular in trending topics before, only once he began as DJ Sukutz! Tablo then joked that after 15 years of hard work on his music, it was a historic day. Tablo shared his excitement that Tukutz finally became a trending topic and because of this Epik High had been reborn after 15 years!

No matter the spelling, we are so proud of Epik High for making it as number 1 in the trending topics! Stay tuned as we wait for more details on their upcoming ‘Lost Map 2’ album!