EXID will be releasing new music next month!

An official from Banana Culture Entertainment confirmed the news, saying that “EXID are currently preparing for a comeback, aiming for a release at the end of October. A specific schedule has not been set as of yet.”

The official also confirmed that EXID leader Solji will be rejoining the rest of the group to record the new album, following an extended hiatus from the group due to hyperthyroidism. Banana Culture however mentioned that there is a need for “additional discussions” around Solji‘s participation in promotional activities such as music show performances. 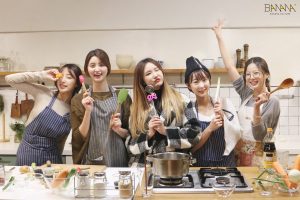 EXID‘s most recent promotions saw the group perform as a four-member group, with only LE, Hani, Junghwa and Hyerin promoting the group’s single ‘Night Rather Than Day‘. Since then, the members have kept busy with individual activities, with LE releasing a solo version of the group’s song ‘Cream‘, Hani covering English band Disclosure‘s track ‘Omen‘ and Solji collaboration track with Primary!

On the back of a slew of hit singles from the group, fans will have high expectations for EXID‘s comeback next month! Are you excited?

Follow Officially Kmusic for the latest news in K-pop!