At this year’s APAN Drama Star Awards, Do Kyungsoo (D.O.) won the best newcomer award for his performance in the drama “It’s Okay, That’s Love.” He came with his fellow co-stars Jo In Sung and Lee Kwang Soo, who congratulated him on his achievement.

The drama received lot of love and support from viewers, and D.O. himself received a lot of love as well for his acting debut. In his speech, he thanked everyone who had patience guiding him through the whole experience. 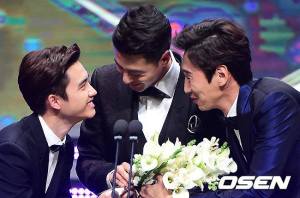 We are very happy for D.O., and wish him a bright future as an actor and a singer.