The actress  involved is known for taking photos with many men, some happen to be mostly naked. A Chinese newspaper has reportedly said  that EXO’s Kris and Jang Geung Suk are involved in this latest scandal. According to the newspaper the actress’s phone had been hacked, then private matter from the phone such as texts and pictures were leaked onto the internet.

This has left Chinese netizens  wanting to know who were those two men were and later insisted with the allegations that the two men in the photos were in fact Kris and Jang Geun Suk. Stating there is indeed ‘proof‘ that  she texted someone named Kris, there is real proof that the man she has been in contact with is the same Kris as EXO’s Kris. 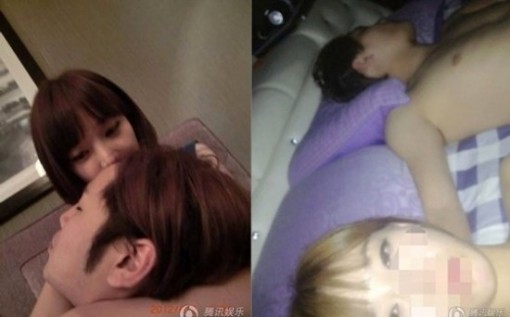 SM Entertainment took to their Official Facebook page on November 2nd,2013  addressing the scandal but later took it down the same day due to the mass backlash they received along with confusion from EXOtic’s.

They then wrote a new statement later that day onto their Facebook page: “[SM-News] To all EXO fans, We have deleted the rumor about EXO Kris sex scandal on our notes because all fans are getting confuse and we are sorry. We are here to share bad and good news about SM Artist, but we have see that many of you fans are mad about posting it on our SMent page. We just want you fans to help see if its really Kris. We hope you guys and girls will forgive us SMent. SMent hope we will start a fresh day again and don’t have to remind about the sex scandals rumors about Kris”.

SMent learned that sometimes “sorry” is not enough. Sometimes you actually have to change.

We hope you fans of SMent will stay tune with us and keep on supporting us!”