‘Toreore Chicken‘ has officially announced the news of idol band F.T. Island being selected as their endorsement models. 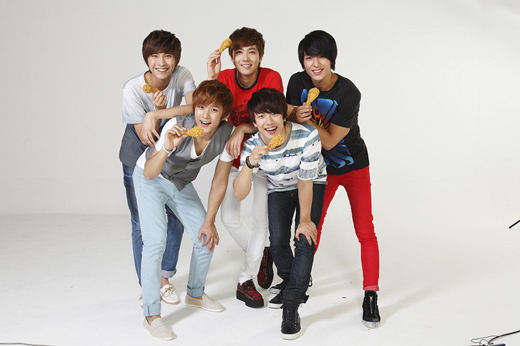 The boys have already completed their filming for the CF last month, so fans can expect to see the full advert soon featuring the boys and their love for chicken!.

Top idols are often selected to endorse Korean chicken franchise brands, and F.T. Island who recently received the opportunity remarked, “All the members really like chicken, and we are extremely excited to be selected as advertisement models.”

Band drummer and maknae Minhwan enjoys eating chicken so much that he’s even been given the nickname, ‘professor chicken’, and fans have even uploaded clips of Minhwan eating chicken online.

Meanwhile, F.T. Island recently concluded their independent Japanese tour which took place from June 24th to July 8th in front of 60,000 fans, and also performed at a concert in Hong Kong for an audience of 4,000 on July 14th.

The band will be releasing their eighth Japanese single “TOP SECRET” August 8th.