At approximately 7:30pm on November 10th the online news site AllKpop released an article pertaining to the purported release of nude photos of solo female singer Ailee onto an anonymous website.  The article also contained the pictures of a young girl but with the compromising portions blurred out.

The fan reaction was immediate with most fans defending Ailee and denying the pictures were of her and asking AllKpop not to post such articles.

Within hours Ailee’s label made it’s official statement with the unfortunate news that the girl in the pictures was indeed Ailee.  While Ailee had been living in the United States she had been the victim of a deplorable scam by a group of individuals claiming to be from a well known lingerie company.  They had requested the nude pictures from her under the guise that they were needed to examine her body accurately in order for her to obtain the job.  Once the pictures were sent, the company cut all ties with Ailee.  Ailee contacted the police but unfortunately no criminal charges could be pressed due to a lack of evidence, but it was discovered that Ailee was not the only young lady to be scammed.

Ailee’s label, YMC Entertainment, also revealed that at the time of this unhappy situation her then boyfriend had asked for the pictures to better help Ailee deal with the situation.  It was reported afterwards that that person was Daniel Lee, a current employee of AllKpop and that YMC had been in contact with him regarding the leaked photos.  YMC concluded their statement by warning people that they would be taking legal action against the person who leaked the photos.

Since YMC”s first official statement many things have happened in a very short time.

AllKpop released an official statement on their involvement in this situation.  They stated that it was back in June when an individual from Canada contacted them claiming to have nude photo’s of Ailee.  The individual claimed to not be able to contact Dispatch or Sports Seoul, two well known Korean media outlets, and would sell the pictures to AllKpop for the right price.

AllKpop’s statement continues with the individual claiming to be a middle man for the person actually selling the photos but that he was able to send AllKpop a photo for proof of the legitimacy of his claim.  The man would meet a representative of AllKpop at an undisclosed location and “ provide us all the photos in exchange of $3500 USD in cash“.  AllKpop states that they turned down the man’s offer and then proceeded to contact YMC Entertainment since they had such good relations with Ailee.  They informed YMC “that if they were to pursue legal action, we would be bound to provide the contact information of the informant“.  According to AllKpop’s statement YMC dismissed the communique from them believing the situation to be made up.

AllKpop informed the label that they would not write anything about the photos unless said photos ended up being posted on the internet elsewhere.  Their statement read “We very clearly stated that if the photos were to show up online we would have to write the story as that is our job and duty as a news site.”

On November 10 they stated that they received an anonymous tip that the photos had been uploaded to a forum site called AnonIB, an anonymous image board.  Since the photos were now on the internet, AllKpop made the decision to break the story as it is their “policy to report on the truth“.

In their closing paragraph AllKpop does admit that Daniel Lee, one of their employees did date Ailee in the past.  They do state that not only is Ailee a victim in this situation but that Daniel Lee is as well since YMC does not know who the true culprit is they “turned the blame to the easiest target“.

In closing they state “If legally requested by YMC, we will provide all information to the proper authorities, to ensure that the truth of the matter is revealed.  We truly hope that YMC decides to run a full legal investigation, as it will reveal the whole truth of the situation.”

While we still currently do not know the whole story many fans have taken to unfollowing AllKpop’s twitter.  With their twitter account seeing a loss of over 3000 followers in less than 24 hours it seems that the article has not sat well with most people.  It also appears as though many artists have unfollowed AllKpop’s twitter with names like Jay Park, G-Dragon, miss A’s Min, f(x)’s Amber and U-Kiss’ Kevin being named by fans as some of them.

Additionally.  to show their support in this troubling time fans came up with a hashtag to use both on Twitter and Facebook to show Ailee that her fans still support her. #Aileeansloveailee and #Aileeanssupportailee were both seen trending in different places in the world at different times since the start of this affair.

Some of Ailee’s former label mates from Muzo Entertainment also tweeted their thoughts on the situation.  Ailee was part of the label prior to her debut and collaborated with several of the artists while she was with them.

Johnnyphlo tweeted both this picture and the statement concerning his feelings on the situation, Andy Yoo and Decipher both tweeted as well.  But perhaps Goni Kim took the most initiative and found a YouTube video of President Roh Moo Hyun, the 9th Korean President (2003-2008) saying “You should be ashamed” in Korean and tagging AllKpop in his tweet. 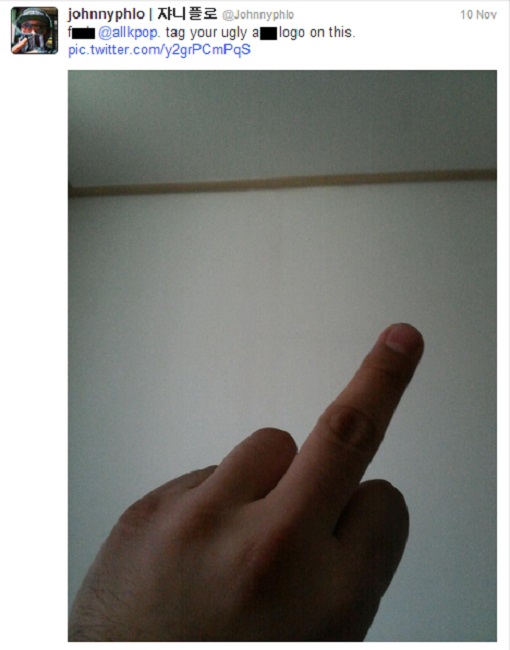 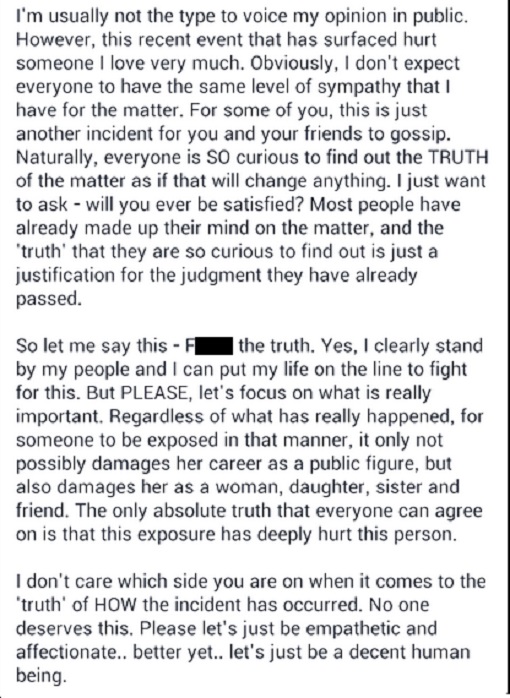 G.NA also tweeted and posted a picture to her instagram, though it is unsure if it was meant for Ailee but their very close friendship is a well known fact. 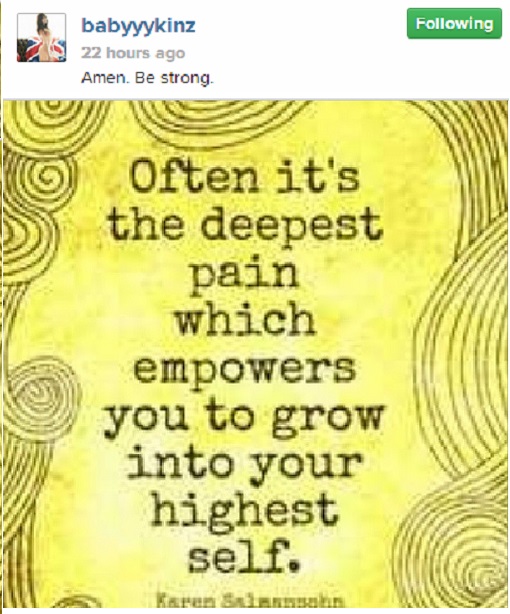 As of this morning YMC Entertainment has released a further statement and has proceeded in legal measures to find and prosecute the person who leaked the photos of Ailee.

A representative from YMC told local news “CEO Jo Yoo Myung has personally appointed a lawyer in the U.S.  However, we cannot currently reveal specific plans as we are still in the process of closely examining the facts“.

YMC has chosen to use a foreign lawyer due to the IP address for the leaked photos all being outside of Korea thus making it difficult for the Korean police to investigate. If they had gone with a Korean lawyer it would make the process not only harder but cause the investigation to be prolonged since they would have to acquire help, not only from the local police force but the embassy as well.  The source from YMC also states that the length of the investigation will also depend on how much AllKpop cooperates.

It has also been stated that Ailee will be continuing her Japanese promotions for the month of November as scheduled.  It has not even a been a month since Ailee’s Japanese debut with the Japanese version of “Heaven“.  As of this time no decisions have been made concerning her schedule for December.

Again we here at KMusic ask that you continue to show Ailee the support she deserves and needs in this turbulent time.