Since appearing on ‘Hyori’s Bed and Breakfast’, IU has received over 10 different offers for acting roles. Her down to earth personality on the show has attracted the attention of a lot of directors. TvN‘s ‘My Uncle‘ is one of the current offers. However fans don’t seem to be reacting positively to this news.

‘My Uncle‘ is said to involve a romance line between a girl in her 20s and a man in his 40s. Fans have taken to IU‘s Instagram to voice their disapproval with such a concept. Discouraging her to take the role as it might become a fantasy for girls in their early 20s. 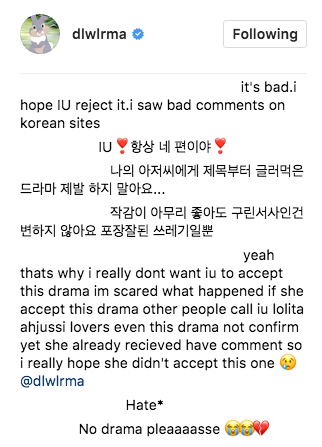 Fave Entertainment has told TV Report that IU is still in the process of looking over offers. Currently nothing has been set in stone.

It would be exiting to see IU acting agin but what do you think of the offer? Are you for it or against it?  Let us know in the comments below.

Scroll for more
Tap
John Park to make a comeback AND hold a concert before the end of the year!
See how things are done behind the scenes in Block B’s ‘MONTAGE’ jacket making!
Scroll