FIESTAR vocalist Hyemi is working on a collaboration with the producer!

Hyemi has released her first official teaser photo in the lead up to her collaboration track with KAZEF. Check it out below! 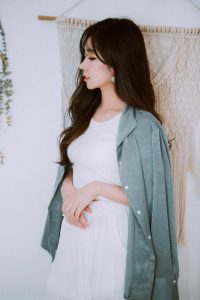 The simple teaser image is almost like a candid photo, with Hyemi adopting a casual, relaxed pose in a scene filled with natural light. The elegant, clean styling of the shot means that Hyemi‘s natural beauty comes to the fore, with the singer capturing the viewer’s attention without even needing to look at the camera. Her green jacket provides a pop of colour against the white-dominated background, but is muted enough not to disturb the quiet harmony of the colour scheme.

Hyemi‘s photo was accompanied by the title of her collaboration track, ‘My Heart is Like That‘. In conjunction with such a soft teaser image, the title suggests that Hyemi‘s upcoming song might be a ballad. Such a style would prove a change in musical direction for KAZEF who is better known for producing EDM tracks.

‘My Heart is Like That‘ will be released at 12PM KST on October 26!