B.A.P has definitely inspired their Filipino fans to do humanitarian actions, as they donate to the health sector of UNICEF Philippines.

B.A.P. Ph is a fan club based in the Philippines for TS Entertainment‘s male idol group, B.A.P.

The fan club started their UNICEF Project last February 12th. The aim of their project is to help UNICEF Philippines in their goal of helping the children who are in need. They gathered funds through individual and group donations. 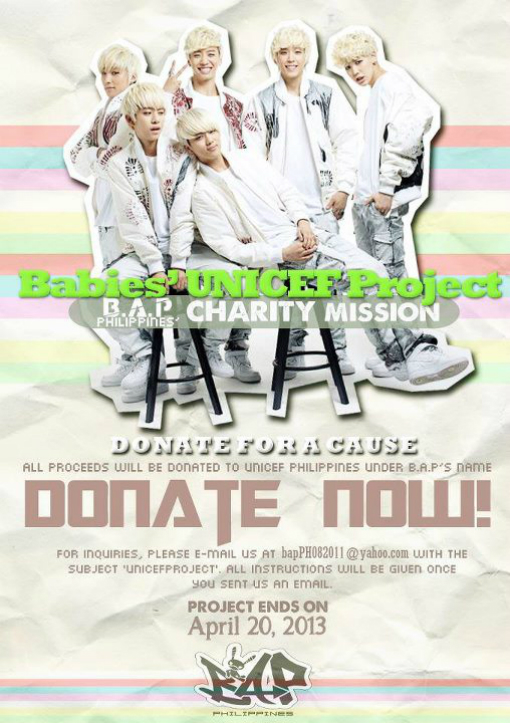 The project ended on April 20th and with the help of Filipino babyz, they were able to gather a total of 16, 520.oo Php (413,000₩). On April 26th, the members of the fan club went to UNICEF personally to give the donations. The collected amount will be used to provide for clean water, medication and nutritional needs of the kids.

In the certificate of appreciation from UNICEF, it can be seen that the fan club named the donation after their idols. This is the result of the fans’ love for Yongguk, Himchan, Youngjae, Daehyun, Jongup, and Zelo. For one charitable cause, they cooperated and brought good things to others.

On May 5th, Children’s Day, B.A.P Ph will be having a Twitter Brigade to inform B.A.P of this successful project. Check out their Trend Project.