It all started at 5am, waking up, and taking the train to New York at 6am. We waited in line for a good 7 hours until the VIPs gathered in front of the door. Another 4 hours was spent in the freezing cold with rain beating down on all of us. By the time the doors opened, my toes had gone numb. We got inside and a big projection lit up the stage ‘B1A4 FOUR NIGHTS IN THE US‘.

The first 5 minutes was your basic pop music then B1A4 started to play, I was in front of a pole but had managed to move my way to third from the barrier when the curtain moved and the crowd screamed. Baro‘s voice came out of no where and the boys rushed out singing a hit from their latest album ‘Good Timing‘. The concert continued with Baro leading with his impeccable English and the rest of the boys trying their hardest. In the middle of the concert, Baro announced that we were going back in time, so the entire crowd turned around making a rewind noise and we were back to debut songs like ‘What’s Happening‘ and ‘Beautiful Target‘ in an energetic medley. 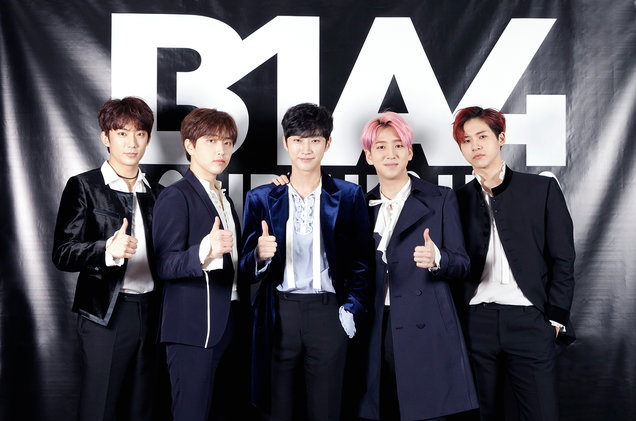 The boys ended with Korean to express our love which (in my minimal understanding of Korean) I understood completely without the translator that followed soon after. The crowd was buzzing after the boys left the stage, my ears were ringing, and my throat was raw. The fans began to cheer ‘encore, encore, encore’! Finally, Baro’s voice came from beyond, to tell us to be louder and louder until the boys appeared once more, this time in sweatshirts. Baro and Jinyoung gathered water bottles, and the boys proceeded with the song ‘Good Timing‘. The crowd was soaked completely! Water cascaded through the crowd with every “YES”, and just when I thought there was none left, Baro had appeared with another box, and the song went on for a good 10 minutes. Gongchan, Jinyoung, and Cnu grabbed the phones closest to them and proceeded to take selfies. When they finally left the stage, the VIPs waited buzzing and preparing for hi-touch while trying to keep our self-control. I gathered the information to get the selfie Gongchan had taken, and was preparing to meet my newly named bias. We proceeded up to the balcony and my heart dropped as I stared at the boys. It went by fast, faster than I expected, but the warmth and softness of my bias’ hands will never be forgotten (and the small squeeze I had snuck to Gongchan).  It’s a night that will never be forgotten, and just listening to B1A4 gets my heart pumping.

From my personal collection, Gongchan and the boys brought an unforgettable night! 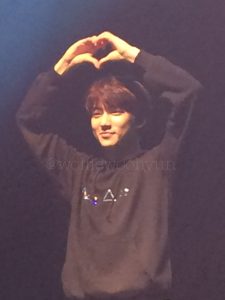 What was your first K-pop concert like? Or if you haven’t been to one, who would you most like to see? Let us know in the comments below

For all the latest in Korean entertainment follow Officially KMUSIC!