‘Freeze’! Momoland’s new MV is out!

‘Freeze’! Momoland’s new MV is out!

The nine girls of Momoland have returned with a super fun, ultra cute music video for their title track ‘Freeze‘ from their mini album of the same name. Check it out below!

The music video for ‘Freeze‘ sees Momoland taking on a circus-inspired concept as they try to gain the affections of Wanna One‘s Jae Hwan. The set is an explosion of colour which makes the viewer feel as if they are in a dream. The adorable charm of the nine members is amplified by the cute choreography, which sees the Momoland girls impersonating marionettes! 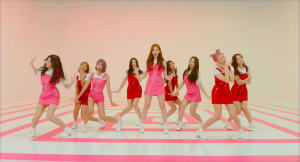 ‘Freeze‘ is a fun pop song, matching a catchy hook with an energetic beat created by a drum machine. What will make the song stand out from its competition is the fact that it samples a famous orchestral piece from the Romantic era! The bright keyboard instrumental accompaniment is based on Czech composer Julius Fučík‘s ‘Entrance of the Gladiators‘. The piece was originally written as a military march, but gained popularity in the early 20th century when it began to be used to introduce clown performances in circuses. Momoland is certainly not the first artist to use this piece, but their fun interpretation of ‘Entrance of the Gladiators‘ sets them apart from many others.

Momoland also released a cheer guide video to help their fans learn the fanchants for ‘Freeze‘! Check it out below:

Momoland also released ‘Wonderful Love‘ earlier this year. What do you think of the group’s latest track?