FT ISLAND has finished their first  concert in their ‘TAKE FTISLAND’ tour. It was held in Beijing, China on April 13. 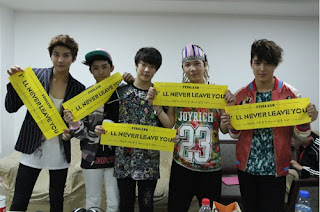 FT ISLAND posted a group photo on their Weibo account with the caption, “End of concert!!!!! Thank you for having good time with us. And the event too^^ Primadonna indeed~~~ Awesome”

At the beginning of the ‘TAKE FTISLAND’ concert in Beijing Olympic Stadium, FNC Entertainment stated the idols were in top shape for the performance.

FNC Ent. stated, “Since their last concert in Shanghai held on January 19, the members pulled off a very energetic concert and enjoyed their performances.”

Chinese fans were impressed by the Chinese the members spoke during the concert. The songs the group performed were Life, Paper Plane, Compass, Your Words, I Wish, Let It Go, Wanna Go and others from their album ‘Five Treasure Box.’