Get ready for a new solo release from MAMAMOO’s Solar!

Get ready for a new solo release from MAMAMOO’s Solar!

Solar has announced the fifth edition of her solo project ‘Solar’s Emotion‘!

The news broke through a post to MAMAMOO‘s official SNS accounts. Take a look at Solar‘s teaser below! 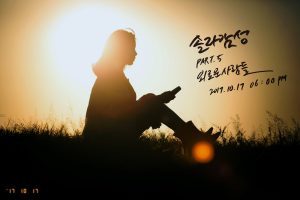 Solar‘s new teaser reveals that the fifth installment in her solo project ‘Solar’s Emotion‘ will be a track entitled ‘Lonely People‘! According to her agency RBW, this release is “a special gift for the fans”, and will be perfect for the reflective feelings associated with the fall season.

The teaser image shows Solar sitting alone in a field, silhouetted against the glare of the sun. The cold, brown colour scheme creates a contemplative atmosphere, fitting for a track called ‘Lonely People‘!

Solar‘s ‘Solar’s Emotion‘ solo project series started back in 2015 with the track ‘Lived Like A Fool‘. The series has been steadily gaining popularity, and the fourth installment ‘Happy People‘ was released on Solar‘s birthday in February this year.

MAMAMOO‘s leader Solar will make her solo comeback with ‘Lonely People‘ at 6PM KST on October 17!