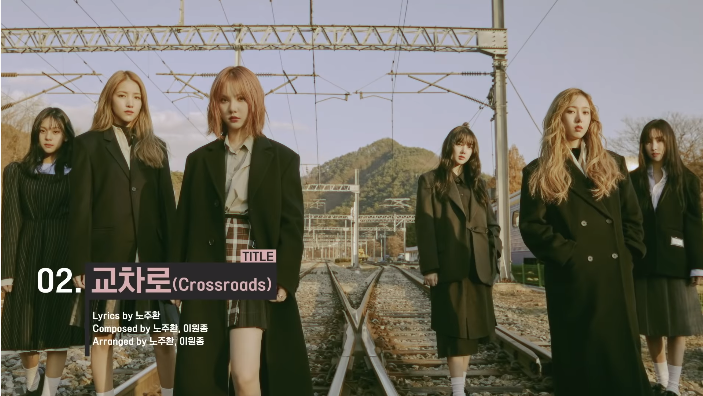 On January 30th, GFRIEND released their MV teaser for their title track ‘Crossroads’ off their new mini album, ‘回:LABYRINTH’ . Just the next day after, on the 31st, they released the highlight medley for the whole album. Check them out down below!

Starting with the MV teaser for ‘Crossroads’, it begins with member Umji in bed having just woke up, but then she lays back down as if thinking of something/ someone. A soothing orchestral instrumental plays in the background. We then see the other members going toward looking for someone such as seen with SinB at a standstill looking in both directions, Yuju chasing, and Sowon in a car travelling. The exception is with both Yerin and Eunha. The former is sinking into a bathtub, whilst the latter isn’t seen until after a seen with the other 5 members relaxing at a campfire. She’s alone, looking in a mirror, as an eerie harmony sounds in the background. It ends with a display for a glass bead (referencing back to their story as seen in their previous teaser).

Moving on to the highlight medley, it shows the album will contain 6 tracks, with a couple of them having credits from Big Hit Entertainment‘s CEO, Bang Si Hyuk. This will be the girl group’s first comeback since their company, Source Music was acquired and now acts as an independent subsidiary to Big Hit Entertainment (housing artists such as BTS and TXT). There is a short initial impression of each track below:

GFriend‘s 9th mini album, ‘回:Labyrinth’ with the title track ‘Crossroads’ and its MV will be released on February 3rd, 6PM KST! Are you excited for the group’s return? Let us know in the comments below!

Scroll for more
Tap
EVERGLOW stun us and with their latest MV teaser for ‘Dun Dun’!
PENTAGON unveil their release schedule for ‘Universe: The Black Hall’
Scroll