MBC‘s “Section TV Entertainment” summarized the recent whim of GLAM‘s Dahee and Lee Jiyeon, who blackmailed actor Lee Byung Hun. The show surmised that the two might end up paying 20 million won (~20,000 USD), or spend up to 10 years in prison.

It all began with Lee Byung Hun filling the attempted extortion case, which led to the arrest of Dahee and Lee Jiyeon. The two blackmailed Lee Byung Hun with a video clip that was speculated to contain obscene behavior and comments. Soon after the investigation began, the two women purchased tickets to Europe, and were planning to fly out of South Korea to avoid punishment. However, according to lawyer Son Sunho, it is not  important whether the two suspects were trying to escape or not, because they are still going to be fined the money and likely get prison time anyway. 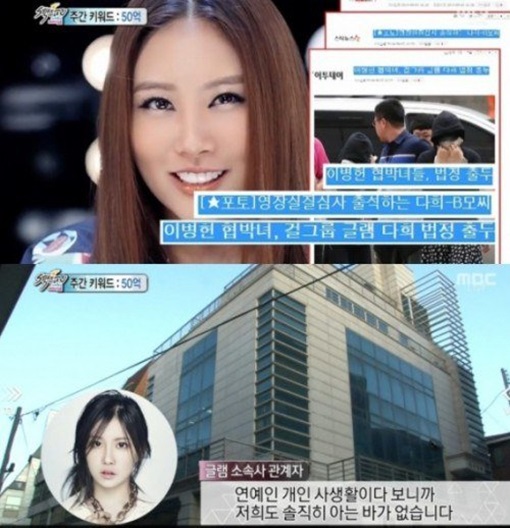 GLAM Dahee’s agency commented, “As it is the private affairs of a celebrity, we currently have no information about the matter.”

Scroll for more
Tap
Hyorin Sheds a Tear on “I’m a Singer”
Lee Hyori Shares Her Thoughts on Having a Child
Scroll
Loading Comments...