GOT7 Releases Breathtaking Trailer For ‘Flight Log: Arrival’ Along With Comeback Tracklist

GOT7 Releases Breathtaking Trailer For ‘Flight Log: Arrival’ Along With Comeback Tracklist

GOT7 is really getting aghases hyped up for this comeback!

On February 27th, GOT7 dropped their first trailer for their comeback album, ‘Flight Log: Arrival.’ Jinyoung is the lead for the teaser trailer, and wow, I must say the cinematography was straight up out of the movies.  The eldest member finds himself seemingly alone atop a snowy mountain. What’s also interesting is through the flashbacks of the video, Jinyoung finds himself washed up alone on a beach. The dichotomies add a really interesting element to the video and the overall scenery is really mesmerizing.No instrumentals can be heard from the video except for the sound of the waves which really goes along well with script at the bottom of the screen. Check out the full trailer below:

Since the trailer’s release, many fan theories have been thrown around and many have speculated that Jinyoung has actually died. However, the scene where he is brought back to life by the defibrillator makes me think it may be the opposite. Though at this point it’s hard to tell. And of course, that’s always half the fun. It will definitely be interesting to see how everything plays out when the comeback is fully released.

The group has also revealed their track list with a total of 8 songs and the title track is called, ‘Never Ever.’ The album is set to drop on March 13th at 12pm KST! 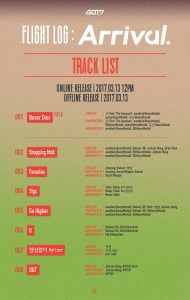 What are your thoughts on the trailer? Let us know in the comments below!