Tuesday 3rd of July marked the start of the American leg of GOT7’s Eyes on You Tour.  The Toronto concert was the only Canadian stop on the tour and the turnout suggested they could have easily added another date.

First of all the group shared a Hi-Touch parade with those fans lucky enough to gain P1 tickets.  The members stood behind a low table smiling and shaking hands, as the fans trotted past, most too excited to speak.  Just an hour later GOT7 would take to the stage to perform to a packed Scotiabank Arena.

Even before the group came out a sea of green filled the entire first tier of seats; both pits and the GA standing were crowded and jostling for position to get the best view of the performance.  The stage shape allowed fans to spread out equally meaning they were never further then a few rows back from the members as they sang and danced through the most famous songs in their repertoire.

The catchy tunes and outstanding choreography were interspersed with BamBam’s crowd engagement often asking the members to talk to the fans with mixed results.  There were also video clips of the group meeting and preparing for the tour, reminiscent of the I GOT7 TV series, showing an insight into the workings of the group and the camaraderie and closeness the members share.  The clips also highlighted how much the members have grown over the last four years.  There was an emotional cartoon interjected into the set, which also allowed BamBam to quiz the members further about their own reactions if the situation were recreated in their own lives.  Every comment was met with cheers from the gathered fans even before Mark had translated any Korean into English. 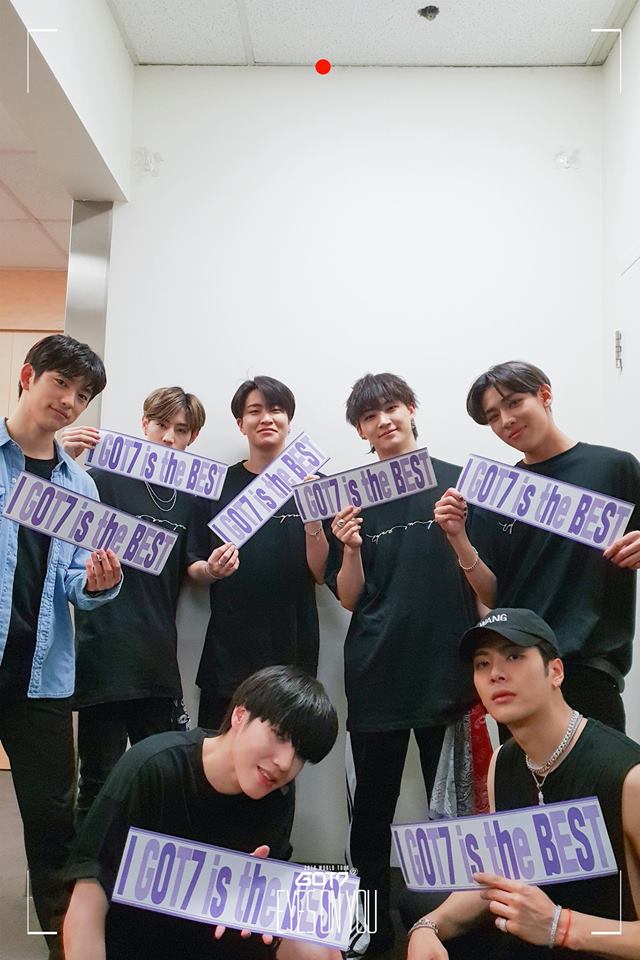 The group also performed in their various pairings with drastically different styles as the show progressed.  The obligatory, Jackson taking his shirt off, drew loud screams from the assembled Ahgase even after he had asked them if they were ready.  Throughout the concert the fans were witness to an intimate show that highlighted how close and relaxed the members are, whether it was Jackson and BamBam laughing and joking on the sofa, JB dancing around on the stage and smiling at the crowd or Yugyeom chasing Jackson after he teased him the group seemed so happy and natural with one another.

The fans were finally treated to a show of gratitude by each member starting with Youngjae who spoke in Korean with Mark providing translation into English.  The assembled fans were shocked when Jinyoung, who was second in the line, thanked the crowd in English, admitting that he was nervous to do so, but that he had been studying hard in order to be able to communicate with all his fans.  His honesty and heartfelt comments wooed the crowd and gained supportive cheers as he spoke fluently and eloquently.

The fan event went well with signs thanking the band held high during the groups performance of ‘Thank You’.  The finale saw the band take to the extended stage and dance and sing while confetti fell  from the sky like snowflakes. BamBam took selfies with fan’s phones and cameras and Jackson joked with the dancers while JB danced around holding a rose between his teeth and smiling broadly.

For any Aghase the show was one to remember forever.

Photos: Official GOT7 Facebook from the Toronto stop
Written by: Katie Mack
Edited by: Terry ALS

Scroll for more
Tap
Are YOU buying tickets to see DAY6 in Melbourne on your lunch break tomorrow? New details here!
UP10TION To Take Over Europe in September
Scroll