GOT7‘s Jackson Wang has released the music video for ‘Bullet To The Heart’, the first single from his first solo album, ‘Mirrors‘!

Teasers posted before the release gave hints towards the song’s heartbreaking concept.

The video begins with Jackson sitting in the center of a plain room, moving around in distress. As Jackson sings “Devil in a black dress“, a mysterious woman dressed in a flowing black dress circles around him before beginning to control his body with her painted black hands. Jackson is forced to move around like a marionette puppet as the woman flings him around with no regard for his pain.

In a comment posted to a teaser on his Instagram, Jackson explained that even though a certain path or journey may be difficult and hurt us, “we insist because we love it too much“. This concept of painful love shown in ‘BULLET TO THE HEART’ is something many people can relate to as well as the inability to give up something we love no matter how detrimental it is to us. 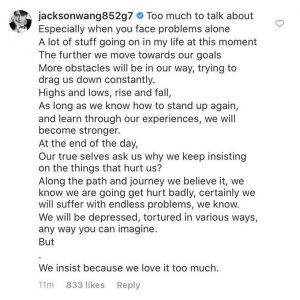 We are excited to see what else Jackson has in store on his full album! ‘Mirrors’ will be released sometime in October!

What did you think of the music video? Tell us in a comment down below!

Scroll for more
Tap
Super Junior are looking for ‘Somebody New’ in special video
Ten, Taemin and Kai impress with their slick dance moves in SuperM’s performance video
Scroll