GOT7’s Park Jinyoung Officially Becomes Part Of The Cast Of ‘Legend Of The Sea!’

GOT7’s Park Jinyoung Officially Becomes Part Of The Cast Of ‘Legend Of The Sea!’

Got 7’s Jinyoung has officially been confirmed to be a part of the upcoming SBS drama ‘Legend of the Sea.’ 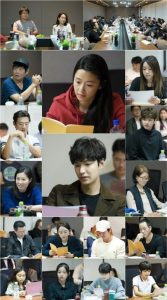 The drama will have some big names within the cast and will star Lee Min Ho and Jun Ji Hyun. Got 7 Jinyoung’s role is of the younger version of Lee Min Ho’s character. ‘Legend of the Sea,’ will also have fellow JYP actress, Shin Eunsoo.

The cast recently had their first script reading together as seen in the picture above. The premise of the story is about a fisherman and a mermaid set in modern day Seoul, although most of the drama has been filmed in Spain. The premise is based off an old Korean legend that took place in the Joseon Era in Korean history from 1392-1897.

We hope you look forward to seeing this drama as the story starts on November 16, 2016 on SBS.

Edited and Revised by: Gigi Estilo