Former Super Junior member, Han Geng, who went on to form a solo career for himself in his home country China, will be included in the all-star cast for the upcoming Hollywood production ‘Transformers 4’.

Hang Geng recently replied to Michael Bay (the director of the fourth film) via Twitter, in regards to the joining of the cast line-up. 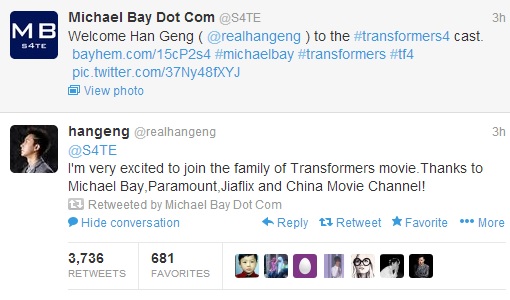 Michael also wrote on his website, “He’s one of Asia’s top stars in the worlds of music, television and movies and has become one of the most influential entertainers in China. Now he’ll also be known for Transformers 4. Welcome Han Geng to the cast of Transformers 4.”

Congrats to Han Geng! How exciting!

Will you be watching the movie just to see him?