Officially Kmusic would like to wish BTS a very happy anniversary! 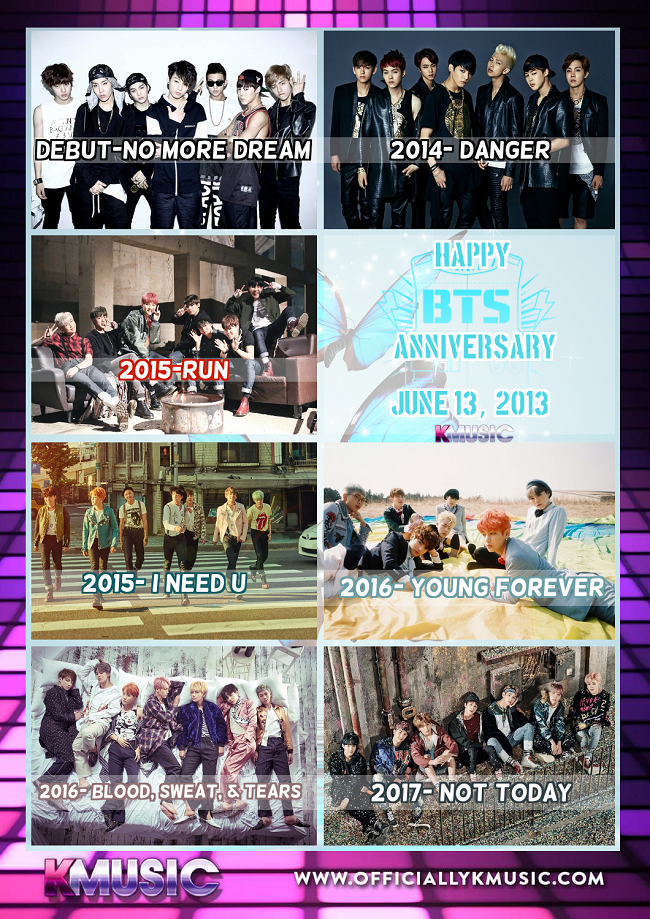 He is actually the fourth oldest member of the group; however he was picked first from the original line-up.

He is a writer and producer of a lot of their music along with Suga and J-Hope.

He has a high IQ at 148 and taught himself English though watching FRIENDS and self-study in New Zealand.

When he gives a speech, he starts out in English, but finishes in Korean.

He’s been a co-host on After School Club (along with Jimin and Jungkook).

He’s a supporter of LGBTQ rights.

He injuries himself a lot and is known for also breaking a lot of stuff; it’s earned him the name of “God of Destruction” among the fans and members.

If he was a girl, he would date J-Hope.

He use to be an underground rapper.

He shares his dorm room with Jungkook.

He is known for his famous wink and blowing kisses to his fans.

He said if he was a girl he would date Jimin.

He is a collage graduate and currently going to grad school.

He is the best cook in the group and loves to cook family meals whenever possible.

He can play the guitar.

On the WINGS album; his solo song is “AWAKE.”

His favorite color is pink.

He shares his room with Suga.

In August 2016 he completed his mixtape “Agust D,” which is also the name he chose for himself for this project.

In May 2017, he produced for the first time outside of BTS with upcoming artist, Suran on her song “WINE.”

He writes and produces many of BTS’s song, including many from DARK & WILD, Most Beautiful Moment in Life (series), WINGS and WINGS: You are not alone.

In 2014 they held a small fan event around his birthday to which he bought all 300+ attendees small gifts and wrote each of them a small note to express his thanks.

One of his more famous nicknames among the fans is Min Genius.

He would date Jin if he was a girl.

He loves to take pictures; but due to their busy schedule he can’t take as many photos as much as he would like too.

He use to be a underground rapper.

Better known as “Our Hope” among the fans, he is the third oldest member of the group and part of the “rap line,” although he was hired originally for his dancing skills; he learned how to rap from Suga, but he is also back-up vocals for the group.

He is currently working on his mixtape.

He was the rapper in JiKwon’s “Animal” in pre-debut.

He shares a room with Jimin and Taehyung (V) in the dorm.

He’s the maknae lines’ favorite hyung; because he usually let’s them get away with stuff; or joins in.

In the dorm he is responsible for their laundry along with V.

His dog’s name is Mickey.

He was on a street dance team back home.

He and B.A.P.’s Zelo both audition at JYPE at the same time. They even attended the same school back home.

He is known for his dancing and is one of the best dancers of the group.

He picks on Jungkook saying that he needs to show him more respect as a hyung; despite being close.

His role model is BIGBANG’s Taeyang.

His best friend is V.

The other members say he and J-Hope are the sexiest when they dance.

He usually asks for help from V.

He was in his first drama “Hwarang” along with SHINee’s Minho and he and Jin did the OST for the drama.

Fans jokingly say that B.A.P.’s Daehyun and EXO’s Baekhyun are his parents since they look a lot like him.

He recently started showing an interest in photography and started sharing his photos on the groups’ Twitter account under the name “Vante,” which many fans believe he came up with because of his stage name, “V,” his nickname “Tae,” and they believe Rap Monster inspired him to start to do it, which is where the “N” comes from for “Namjoon.”

Last year during the coming of age ceremony in South Korea (which was also Jungkook’s coming of age) the members all did a special stage and he finally got to perform “His Cyper.”

He is known as the “Golden Maknae,” due to his many talents of singing, rapping, and dancing.

He is best at girl group dances along with J-Hope.

He shares his room with Rap Monster.

One of his nick names his “Baby Bunny,” due his teeth and the fact that he is the youngest of the group.

He is super shy around girls.

He is best friends with GOT7’s Yugyeom.

He loves doing cover songs for a lot of English songs.

He loves make-up and shoes; his favorite band of shoes is Timberland.

He loves to eat as much or even more than Jin.

He is closet to Jin and Jin is the one who gave him the nickname of “JK.”

Things to know about BTS:

They were on American Hustle Life to improve their hip-hop skills.

The original line-up included Supreme Boi; who left the group to be a producer and independent rapper; he still works with the group on many of their songs.

The three who have been together the longest are: Rap Monster, Suga and J-Hope.

They are currently the only group to represent BigHit Entertainment.

They started their Twitter account (as well as their Fancafé ) several months before their debut to get to know their fans better.

Their fandom name is A.R.M.Y.; which means “Adorable Representative M.C for Youth”

Because of their relationship with their fans; their Twitter has now over 6 million followers and they were the first Kpop group to be nominated for (and win) a Billboard Music Award in May of 2017 for Top Social Artist.

In December of 2016 they finally won a MAMA award for Artist of the Year.

All the members have a dog, but the most known are Holly, Rap Monnie and Mickey. (Which belong to the rap line.)

They love to do cover songs for many artist, including “Fools” and their most recent (for their 2017 FESTA) “We Don’t Talk Anymore” by Jungkook and Jimin.

They are also the first Kpop group to get their own tending emoji on Twitter in the shape of their logo.

Blood, Sweat and Tears was their fastest growing music videos to date (both the Korean and Japanese versions.)

Written by, collage and featured images by: Admin Merry