Officially KMusic would like to wish U-KISS a very happy 8th anniversary! 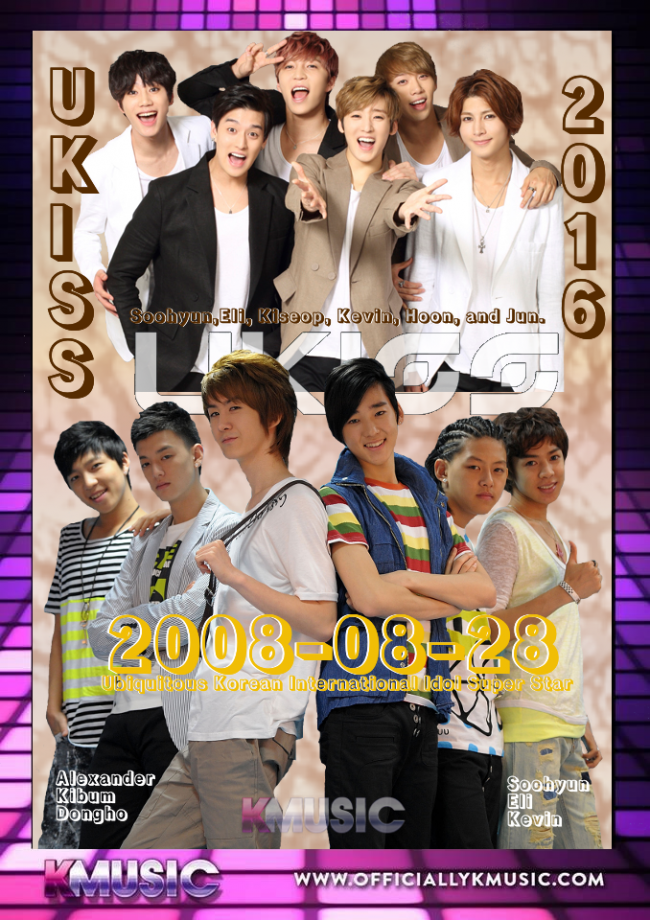 Alex: Alexander Lee Eusebio (알렉산더 이 유세비오) from Hong Kong. He is actually Korean-Macanese; he is a Christian and is now a solo gospel artist in South Korea.

Kibum: Kim Kibum (김기범) from Seoul, South Korea. He is Korean and the older brother of SS501 member, Kim Hyung-jun and was in XING with Kevin before U-KISS.

Dongho: Shin Dongho (신동호) from Yeouido, South Korea. He left the group in 2013 for his military duty, returned in 2015 and married his wife who had a baby 2 days after Eli’s wife.

*Kevin: Kevin Woo (Woo Sunghyun; 우성현) is from San Francisco, California and came to Korea at 15 to pressure a carrier as a singer. He started out in XING, but left in April of 2008. Kevin is also co-host on Arirang’s After School Club with 15&’s Park Jimin and Day6’s Jae, taking over as lead host after Eric Nam left in 2016. Kevin is also a Christian.

Soohyun: Shin Soohyun (신수현): He is now the leader and the oldest member of the group. He grew up poor, but worked very hard to get to where he is today. His only dream was to be a singer.

2009-2010: Bring It Back 2 Old School and I Like You.
While promoting in the Philippines, they sold over 1,000 copies of their record in one day, breaking the record in that county.

Dongho was on The Invincible Baseball Team, Idol Maknae Rebellion and My Black Mini Dress.

Kibum and Eli was in a Thai drama Autumn’s Destiny, but had to be dubbed due to the fact that neither of them spoke Thai.

2011-2012: AJ left due to wanting to go to school and Hoon joined the group, soon they came out with NEVERLAND and other singles and promoted all over Asia and became very popular in Japan.

uBEAT came out with Kevin, Eli and AJ.

2015: Eli announced that he has been married for over a year to his wife, who is 11 years older than hir, after they had been dating for about 5 years and that she was expecting their first child.

2016: Eli’s son was born and U-KISS came back to Korea with their 11th mini album, STALKER.