Officially Kmusic would like to wish Girls’ Generation a very happy 10th anniversary! 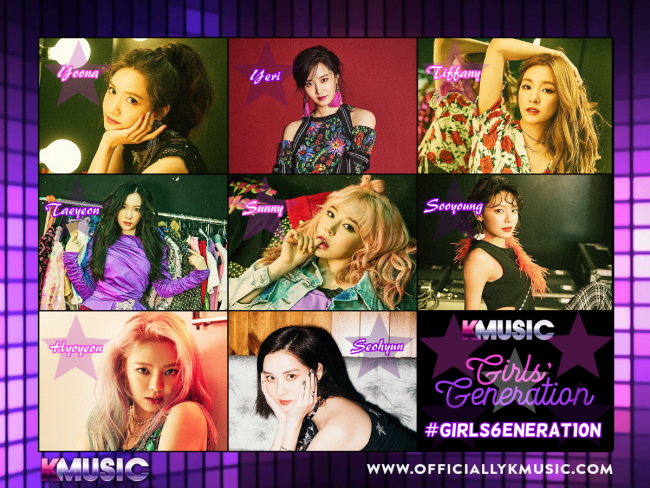 Things to know about Taeyeon:

She is the eldest member of the group.

She didn’t want to be the leader at first and didn’t think the group should have one since 6 of the original 9 girls are all from the same year.

She was on We Got Married with Weekly Idol’s Jung Hyung Don.

She is part of TTS subunit with Tiffany and Seohyun.

Things to know about Sunny:

She was born in LA; moved to Kuwait; then to South Korea during the Gulf War.

Her two sisters were also born on May 15; just in different years.

Her uncle is the president of SM Entertainment.

Things to know about Tiffany:

She and former member Jessica Jung were born in the same hospital.

She use to speak Korean with an American accent; but has since lost the accent when she speaks it. Her accent can only be heard when she speak English.

She is in TTS with Taeyeon and Seohyun.

Things to know about Hyoyeon:

She loves fashion and her favorite fashion icon is Jennifer Lopez.

She’s worked with Janet Jackson and BoA before debut.

Things to know about Yeri:

She says she is one of the slowest to learn new dances despite the fact she is the lead dancer.

She’s been in several dramas including The Starry Night and Defendant.

Things to know about Sooyoung:

She was in the Korean-Japanese group Route θ with Takahashi Marina.

She is fluent in Japanese.

Things to know about Yoona:

She can speak English and basic Chinese and basic Japanese.

She liked to bowl.

She said her ideal type is Daniel Henney.

She’s been in several dramas including “King Loves.”

Things to know about Seohyun:

She was on We Got Married with CNBLUE’s  Jung Yonghwa.

She part of TTS with Taeyeon and Tiffany.

She’s been in several dramas.

Things to know about Jessica:

She left the group in 2014 and is now a solo artist under another company.

Written by, collage by, featured image edited by: Admin Merry