‘Hwarang’ Is Upping The Anticipation With New Teasers!

‘Hwarang’ Is Upping The Anticipation With New Teasers!

There’s a new historical drama afoot and they’re slowly giving us all the juicy teasers we want! ‘Hwarang: The Beginning‘ is KBS2’s new drama scheduled for Mondays and Tuesdays, and features a star flower-boy cast that is attracting a lot of attention!

We’ve already seen some fantastic posters and got an overview of the main characters, which you can read about here! Most recently, we were treated to stills of Park Seo Joon in character as Sun Woo. Dressed in historical clothes he’s pictured both on horseback and drawing his sword. 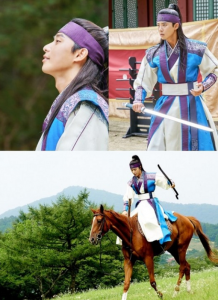 Previously, the teaser trailer allowed a glimpse into the actual drama and featured some epic voice overs. The first, voiced by Sung Dong ll, sets the perfect tone for this intriguing drama with the words:

“A beautiful and special being who puts their life on the line for the country and for the people…this is the future I’m going to create for the divine lands.”

The trailer also comprises of various cuts of the knights, close ups of the main characters and Park Seo Joon reciting strong words of allegiance:

‘Hwarang’ is no doubt creating quite the hype so we can only anticipate great things from this drama! It’s premier date is set for December 19th, so mark a date on your calendars!

What did you think of the trailer and new stills?

Stay with Officially KMusic as we bring you the latest updates for ‘Hwarang: The Beginning’!