It’s been a difficult couple of days for Lights everywhere, with the new of Highlight leader Yoon Doojoon‘s enlistment and member Yang Yoseob‘s impending enlistment as a conscripted police officer.

We were all expecting Doojoon‘s enlistment soon, but in the end he (and us) were only given two days notification and he will formally enlist as an active duty soldier today (August 24).

On August 22, his agency Around Us Entertainment confirmed the enlistment through an official statement, “Group Highlight’s leader Yoon Doojoon recently received his military draft notice and will be enlisting active duty on August 24, 2018 (Friday).”

The statement continues, “You must have been taken aback and shocked at the enlistment news of Yoon Doojoon, who has continued non-stop since his debut in 2009. He was also very surprised at the abrupt enlistment notice. However, Yoon Doojoon will film his current drama until the end with an upright and strong mindset, organize his thoughts, and fulfill his military duty that is necessary as a citizen of Korea.”

“We sincerely apologise for not having been able to tell you ahead of time and that you had to suddenly receive the news through an article, and we once again ask for the understanding of fans. Please show lots of anticipation and support for Yoon Doojoon, who has always prioritized and focused on his family, group, and fans from debut until now, so that he can be discharged in good health and return to you as a more mature and great person.”

‘Let’s Eat 3‘ the drama that Yoon Doojoon has been filming, has announced that the drama has been shortened from 16 episodes to 14 episodes.  The production team stated, “We have finished editing the script on the basis of the story that was planned for 16 episodes, and as it was shortened to focus on the important parts, there will be no change in the plot“.

In light of his quick and unexpected departure, Doojoon wrote a heartfelt letter to his fans, friends and family.

“Hello, this is Doojoon.

“You were surprised right? I was surprised, too. Though not as much as you guys. In order to finally fulfil my mandatory military duty at this old age, I will have to suddenly leave. I wanted to go earlier. Because I can finally take some pressure off that burden though, I’m happy.

“The saddest part that really troubles my mind is the fact that I’ll have to leave without saying a proper goodbye to you. My heart hurts a lot..

“The fact that I could enjoy this celebrity life for almost 10 years is mostly thanks to Lights. In this irregular life, the fact that I was able to feel the most normal feelings of happiness, sadness, and other things is thanks to the special memories I was able to create with you all. You were with me for a third of my life all this time cheering me on. Thank you sincerely for your support. It was an honour.

“I now plan on starting the third chapter to my life. To my members, family, friends, company family, and drama staff members who supported me, I’m so sorry, and thankful. I hope you all stay healthy.

“Finally, to our, and my fans that I love. Please always keep your own health as your priority, and I hope you’ll be happy and healthy. Thank you. Bye.

From one fifth of Highlight, Doojoon.”

Check out Highlight Doojoon’s letter below: 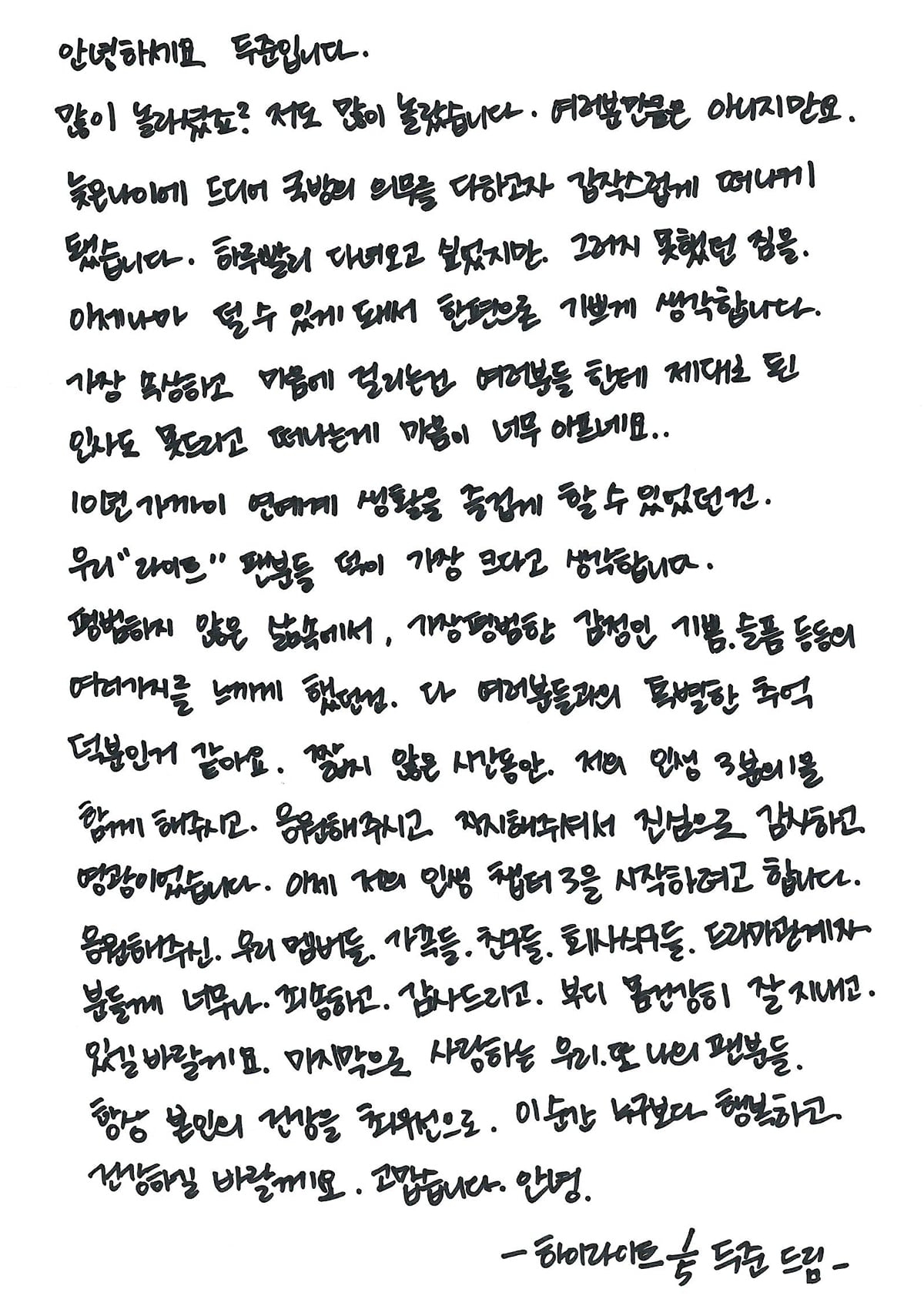 With the enlistment just hours away now, the other members of Highlight have sent sweet and emotional messages to their leader via social media.

Yong Junhyung expressed, “We definitely can’t help but smile when we’re together. Let’s meet soon. I love you.”

Son Dongwoon is currently appearing in a musical and wasn’t able to be with the other members, but still managed to send a message.

He said, “Given how much we waited for the five of us of us to stand on stage in the coolest way possible and have the most fun in the whole wide world, it’s quite regrettable. It’s been a long time since I’ve seen you and it bothers me that I could not even briefly say goodbye in person. If you were not a part of our group, and if you were not our leader, we might not be here right now like this. Someone who I trust very much, follow very much, and like very much. Someone who is always well-liked by anyone who knows him. A kind and genuine person who had said we should play games together since he finishes filming in a few weeks. I can’t seem to get comfortable whenever I have to momentarily greet people one by one and I will probably keep hurting, but I feel like I will burst into tears at the slightest touch. As today is the first performance, I have to do well without showing that I feel this way, but I feel a little sad today.

“Forever Highlight’s leader, forever our hyung. Simply hoping that you will go and return in good health.”

Lee Gikwang wrote, “My friend Doojoon, you’ve gone through a lot as a leader from when you were in high school until now. I hope that now, you can let go a little, serve well as a soldier, and rest comfortably. Be healthy, just don’t get injured, and let’s see each other again soon and start again happily. I love you Yoon Doojoon.” 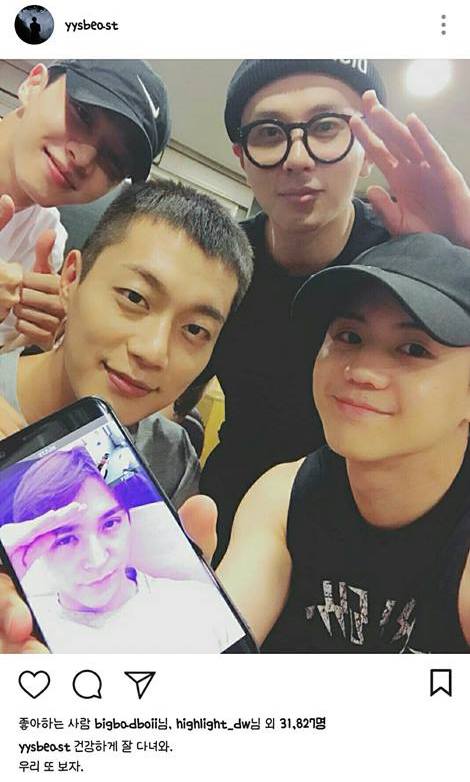 Earlier, it was reported that Yang Yoseob was accepted to serve as a conscripted policeman after applying and completing an interview.

In response, his agency Around Us Entertainment confirmed, “Yang Yoseob was notified of his acceptance as a conscripted policeman. His enlistment date has not been determined yet.”

Enlistment for conscripted policeman usually occurs between five and seven months after the application date.

Highlight’s Yang Yoseob will serve as a conscripted policeman 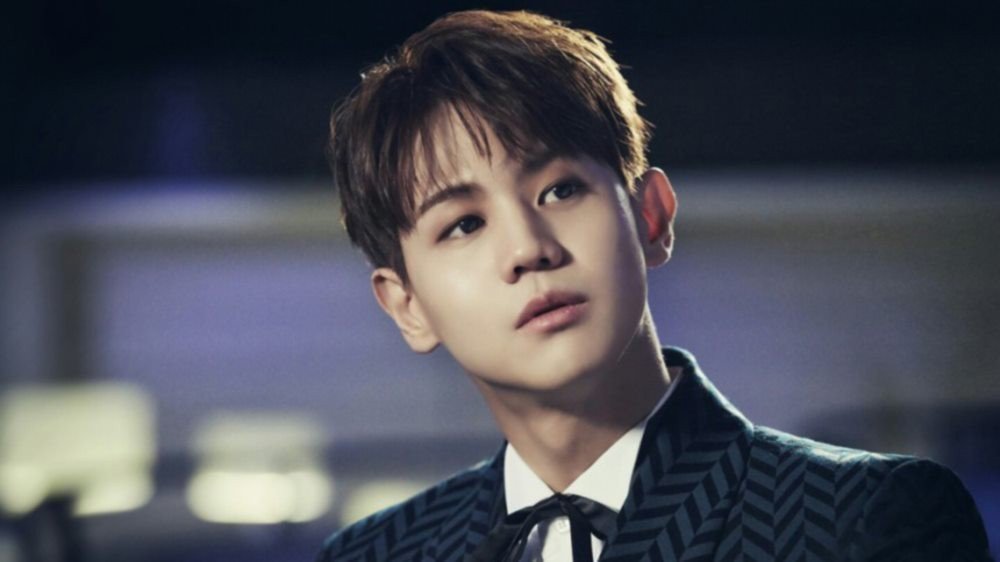 What do you think of the news of Highlight‘s Yoon Doojoon‘s sudden enlistment?  What about Yang Yoseob serving as a conscripted policeman?  Which Highlight member do you think will be enlisting next, or would you prefer that they all enlist together?  Let us know your thoughts in the comments below.