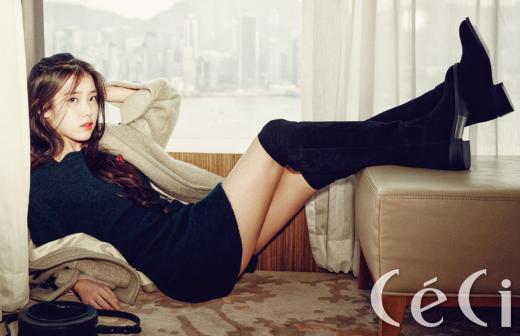 The photo shoot has really brought out the cute and beautiful side of IU, yet showing off some of her womanly features as she models the trendsetting pieces that are just in time for summer final farewell and the introduction into fall.

The image above is one taken along the the streets of Hong Kong, the background of reddish and neon lights bring out IU’s alluring pose and her adorable bunny ears.

IU was said to be very involved with the creative process of each cut and shared her opinions and ideas with the editor and photographer.

You can follow the rest of IU’s photo shoot and interview in the October issue of CeCi’s, that will contain information on 14 pages about the interview and photo shoot.

Scroll for more
Tap
In Case You Missed It: Have You Checked Out The New Girl Group UNICORN?
Entire Celebrity Panel For SBS’s Reboot Of Star King Revealed!
Scroll