IU Gives Us Back One Of Her Heartbreak Songs ‘Knee’

IU Gives Us Back One Of Her Heartbreak Songs ‘Knee’

IU, re-uploaded through 1theK‘s Official YouTube channel here, her gift song for her fans worldwide. This is her self-composed and written song, ‘Knee‘. The new uploaded video shows an innocent yet angelic face of hers as if it is the official music video. IU also performed this single during one of the episodes from “Infinity Challenge” last July 11.

Some of the fans speculated that instead of focusing on a music video, IU perhaps wanted us to listen to the melody and be engulf by the song itself. The mood of the song is really sweet, as if it is a lullaby to a child. It is also accompanied by an acoustic guitar, and instead of using her powerful voice, she serenades us this time with her lovely and soft voice, speaking to us, sharing her depressing and very painful romance.

Check out the re-uploaded video below and listen to it.

The song was originally uploaded months before, after IU won awards from 2014 MelOn Music Awards as Best Artist of the Year and was included it its TOP 10 Artists of 2014 as well. In addition to those awards, she was also awarded Most Popular Vocalist and Best Female Artist during the 2014 Mnet Asian Music Awards that was held on December 3, 2014 at the Asia World–Arena, Hong Kong.

After garnering those awards and gratitude, she posted a tweet from her Official Twitter account dated last December 3, 2014 a link to her song ‘Knee’ through LOEN TREE‘s Official YouTube channel and thanked her fans saying, “Thank you! I am happy, thanks to you! Here’s my gift!” 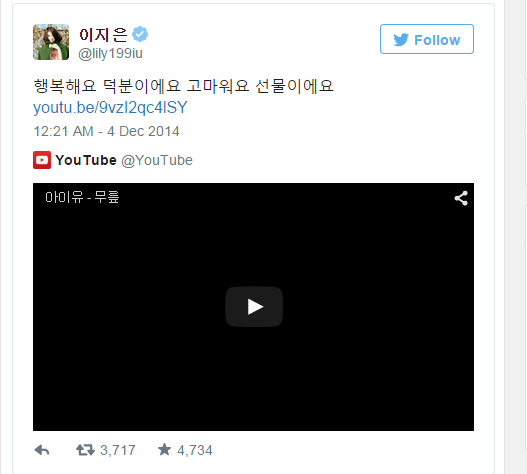 It is a way of showing her love for her Ueanas (IU’s fandom) for their overflowing love and support towards her.  The song itself is really heartbreaking and if you get to listen to it more.

So tell us what your thoughts and feelings about her song ‘Knee’ at the comment section below!

So stay tuned with Officially KMusic as we bring you all the latest news for K-Pop!