All rounder South Korean singer, IU, also known as Lee Ji-eun, held her first ever concert 2018 IU 10th Anniversary Tour Concert <이지금 dlwlrma> in Singapore organised by One Production. Not just singing and dancing, she also writes and composes her own songs.

The crowd cheered as she opened with ‘The Red Shoes‘ followed by ‘Cruel Fairy Tale’ where her little black dress turned white. Being her first time in Singapore, she bragged about how she had a wonderful time touring around, sightseeing and enjoying the delicious signature dishes with her entire team. Indeed Singapore is really a perfect country in IU’s heart. 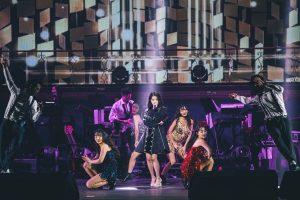 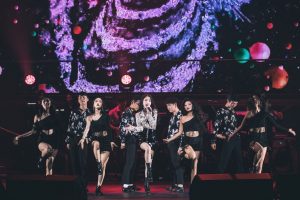 Fans anticipated the show as she continued with ‘dlwlrma‘ which was filled with loud fanchants as her incredible vocal echoed throughout the entire theatre. She also came up with a special name for Singapore fans called “Singaena” which stands for “Singapore and Uaena”. How cute is that! The entire opening set list just felt like a musical with a little touch of a story behind each song. 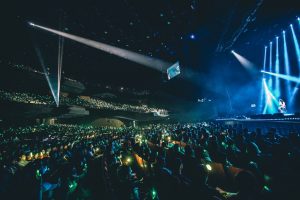 Continuing the show with ‘Friday‘ and ‘Meaning of You‘, IU managed to get her fans to sing along. Follow up ‘爱情‘ is a song she specially prepared as a gift to express her gratitude towards her fans. One song that lingers in my head was ‘Gloomy Clock‘, where she dedicate it to someone she misses a lot. She even changed her mic to a aqua blue mic, and hopes the song would reach the person she really miss.

IU also mentioned that so far among the tour stops, the memories in Singapore is the best and would definitely return for a vacation with her family next year. Moving on, she performed hit songs like ‘BBIBBI‘ & ‘Palette’, which are highly popular overseas, where she talked about how fans inspired her to write lyrics about comfort and becoming a better person. Her never ending gratitude closes the bond between the fans and idol. 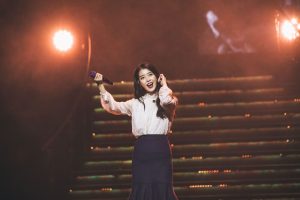 With her very own en-encore, she returned to the stage one last time and performed ‘The Show‘ and ‘Heart‘ requested by the fans as she felt that it’s a pity due to the limitation of time. She even personally requested the guards to allow fans to film using their phones, their last moment together as she then wrap up the show for real and ended off with a flying kiss! 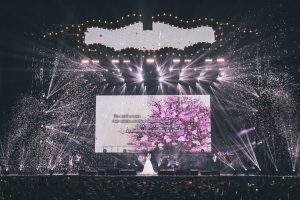 Hope IU had a wonderful time with Singaena here in Singapore!

We would like to thank One Production for the opportunity to cover a great event.

Thanks for rating this! Now tell the world how you feel - in Singapore!\"">Share this on Twitter and on Facebook.
(Nah, it's cool; just take me back.)
MOODTHINGY
How does this post make you feel?

Scroll for more
Tap
Sik-K ‘s European Tour is sure to be a ‘Party’
A.C.E announce European Tour Dates for World Tour ‘To Be An Ace’
Scroll
Loading Comments...