IZ*ONE reveal the tracklist for their upcoming album ‘HEART*IZ’

IZ*ONE reveal the tracklist for their upcoming album ‘HEART*IZ’

IZ*ONE have revealed the track list for their upcoming second mini album ‘HEART*IZ’! 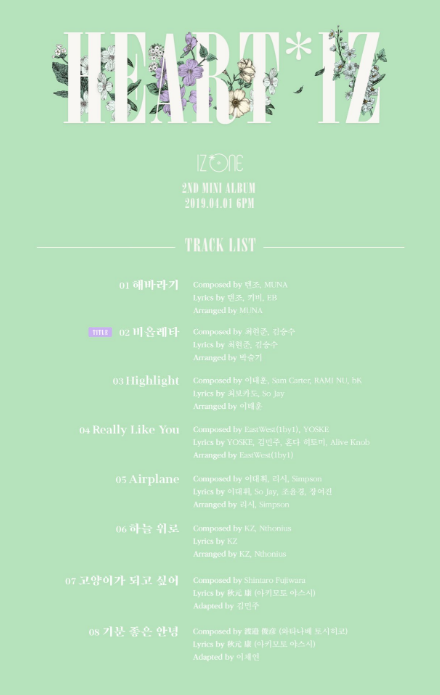 Their new album ‘HEART*IZ’ will consist a total of eight songs, including: ‘Sunflower’, ‘Violeta’, ‘Highlight’, ‘Really Like You’, ‘Airplane’, ‘Above The Sky’, ‘I Want to be a Cat’, and ‘A Happy Goodbye’. ‘Violeta’ will be the title track to the album.

IZ*ONE’s new album is set to release tomorrow on the 1st of April at 6PM KST!

Are you ready for IZ*ONE’s new album? What kind of sound are you hoping to hear from the girls? Let us know in the comments below!

Scroll for more
Tap
BLACKPINK are confident and sexy in their group teaser poster for ‘Kill This Love’!
BOL4 release music video teaser for side track ‘별 보러 갈래?’
Scroll