The last three sets of GOT7 teasers saw Mark, JB and Jinyoung showing off their various charms. Now take a look at Jackson and Youngjae’s amazing photos! Following the trend, the members got two photos and short video snippet. In these teasers, both members seem to be doing some soul searching in at least one of their photos.

Check out the new teasers below!

In addition to Jackson’s individual teasers, there was also a third photo featuring Jinyoung. There seems to be a pattern with previously revealed members sharing a teaser image with the member who follows them. We saw this with Mark and JB, and then JB and Jinyoung. 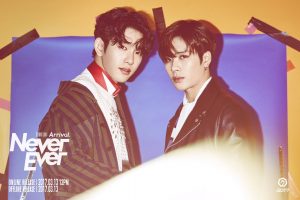 GOT7 will be returning with ‘Flight Log: Arrival‘ and title track ‘Never Ever‘. This is the third installment to their ‘Flight Log’ series that they started almost a year ago. Also be sure to check out what their new album will contain!

What did you think of the teasers? Let us know in the comments!

Stay with Officially KMusic as we bring you the latest news in Korean entertainment.