Jimin unable to dance at BTS’ ‘Wings’ concert in Macau

Jimin unable to dance at BTS’ ‘Wings’ concert in Macau

The decision that Jimin should not perform BTS‘ famously intense choreography at the concert was made as a precautionary measure, meaning that Jimin is going to be okay. Big Hit Entertainment released a statement about Jimin‘s condition earlier today: 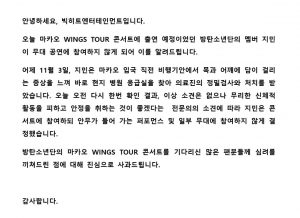 Hello, this is Big Hit Entertainment.

We wish to inform you that BTS member Jimin who was scheduled to appear at the WINGS TOUR concert in Macau will not be participating in the stage performance.

Yesterday on November 3rd, Jimin felt pain in his shoulders and neck whilst on the plane to Macau, and upon landing was immediately taken to a local emergency ward for examination. Another check up this morning found no abnormalities but based on the doctors’ advice that it would be best to avoid strenuous physical activity, it has been decided that Jimin will not be participating in performances with choreography.

We sincerely apologize to the many fans who have been looking forward to BTS‘ WINGS TOUR concert in Macau.

Whilst some fans will be a little disappointed, it is clear that Big Hit is looking out for the health and safety of its artists. We here at Officially Kmusic wish Jimin a speedy recovery, and look forward to seeing him take the stage again soon!