A representative from Dmost Entertainment revealed that Ilhoon will not only rap on Jisook‘s debut track ‘Giggling‘, but he is also the song’s lyricist! News of Jisook‘s solo debut under her new agency was revealed earlier this month. Jisook‘s debut album as a solo artist is due to be released later in August, which will be about 10 months after her former group Rainbow disbanded in October 2016. 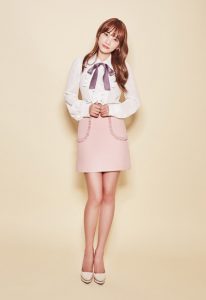 Rainbow was known for their bright and colourful songs which matched the group’s name. Towards the end of the group’s time together, the seven members began to move towards a more mature sound, with songs like ‘Black Swan‘ and subunit Rainbow Blaxx‘s ‘Cha Cha‘, which showed the sexiest concept ever seen in comparison to any other tracks in their repertoire. Rainbow‘s final comeback was with ‘Whoo‘, which saw the group return to their seven-coloured concept with an 80s vibe.

Despite being Rainbow‘s main vocal, ‘Giggling‘ will be Jisook‘s first release as a solo artist. Prior to making her re-debut, Jisook has been putting herself firmly back in the public eye, recently appearing on the popular program ‘King of Masked Singer‘ earlier this year! It still remains to be seen what musical style Jisook will be returning to the stage with later this month!

Follow Officially Kmusic to stay up to date with the latest KPOP news!

Scroll for more
Tap
Seo In Guk signs with new agency
Go behind the scenes with Wanna One!
Scroll