The countdown to JYP‘s survival program ‘Stray Kids‘ is well and truly on!

Just a day after releasing a trailer for the program, JYP has revealed the ‘Stray Kids‘ through a group poster! Take a look below: 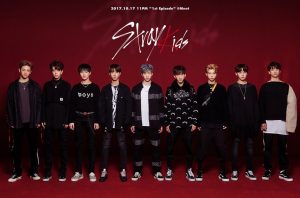 In keeping with the strong image conveyed through their ‘Hellevator‘ music video, the nine trainees cut striking figures against the deep red background of the poster. Their powerful gazes show their determination to debut as a group with nine members.

Even though the show has not premiered yet, there is a great amount of public interest in ‘Stray Kids‘. The unique concept of the ‘Hellevator‘ music video saw Stray Kids become the most searched term on a number of Korean portal sites. There is also a great deal of interest around the format of the show, and how it will differ from JYP‘s previous survival show ‘Sixteen‘ which resulted in the formation of TWICE.

There are more ‘Stray Kids‘ teasers to come, with JYP Entertainment to reveal three members per teaser at 12PM KST on the 11th, 12th, and 13th of October! ‘Stray Kids‘ will premier at 11PM KST on October 17.