The 2K13 FEEL KOREA CONCERT at Korea Week in Perth was held at Challenge Stadium, Mount Claremont in Perth last night. The concert was held in one of the stadium’s venues, fitting approximately 4,000 fans to enjoy the night. It gathered much excitement from Perth fans, and most queued for hours to get themselves a good spot in the mosh pit. There were a number of fan boards supporting the artists of the concert that night. 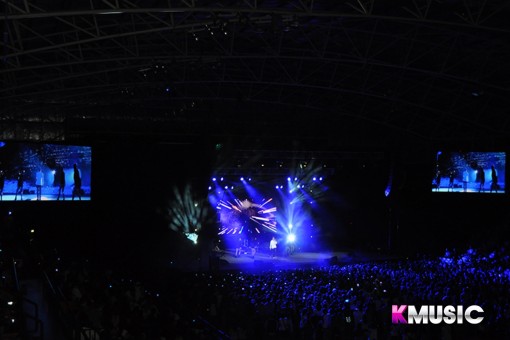 At 7PM, all the lights flicked off except the one pointing to the stage. There were three screens, showing photos of each artist or group – Ongals, T.M.F, Wheesung, Alexander, MBLAQ and Ailee. MC Alexander addressed the important guests connecting to the concert, which was to celebrate the relationship between Australia and South Korea. 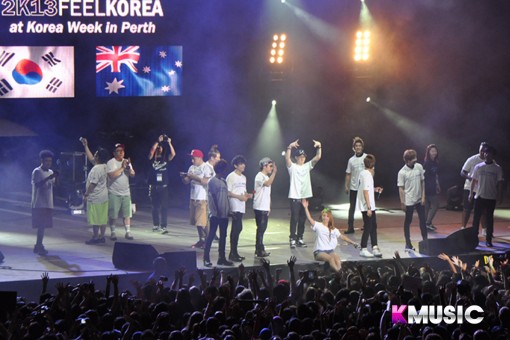 The first act that opened the concert was a performer and comedian – perfordian group, Ongals. As a non-verbal performance team, all fans could enjoy the multiple skits to its fullest because there wasn’t any language barrier. Ongals were dressed in pastel green shirts, white trousers and with their signature neckties; a different coloured one for each member. To start off, they showed some comedic dancing and their impressively experienced beat-boxing skills. It was clear that both Ongals and the fans were enjoying the casual stage, as the excitement and enthusiasm could be heard in their big reaction. The group displayed their talents both skilfully and musically, as they mimicked the Transformers and its passing helicopter sounds, the song Sexy Back and different transportation sounds created by just using their gifted vocals. As Ongals were also comedians, they were very experienced – shown through short gag skits that gathered masses of laughter. For their final act, they blind-folded one of the members who juggled three knife-like objects. As the group exited, there were extreme clapping, screaming and whistling. 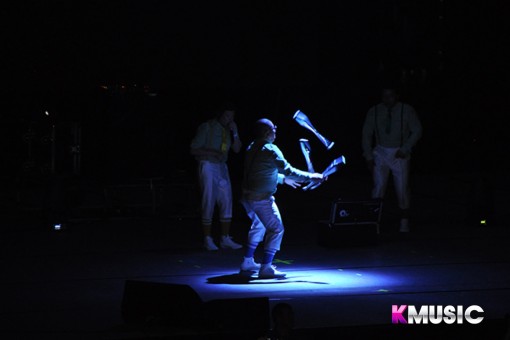 Next, special guest DJ FiLi came up on stage first to show off his catchy remix of songs from different genres such as techno, K-pop and A-Pop. He began it with a stable, strong beat followed by the introduction of the song ‘The Circle of Life’ from the film The Lion King. The songs the audience reacted to most were ‘Gentleman’ by PSY, ‘High High’ by GD&TOP and ‘Bar Bar Bar’ by Crayon Pop. Throughout his part, he danced time to time on the stage, showcasing his multiple talents. 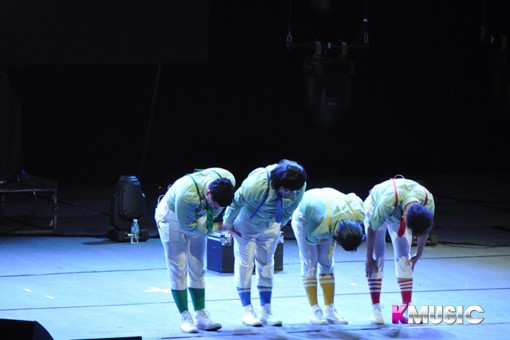 With the music slowly fading into a slower song, the second special guest- rap artist Newko was welcomed onto the stage while rapping to the song. Combined with his charismatic atmosphere, he alternated between rapping and singing. Newko engaged the audience into conversing with him, such as asking who was from which country. He showed his hard work to try and connect with the fans, by saying “Hanguk-in means Korean. Even if you’re not Korean, you can be one tonight!” and encouraged all fans to reply back with the word to each of his lyrics. 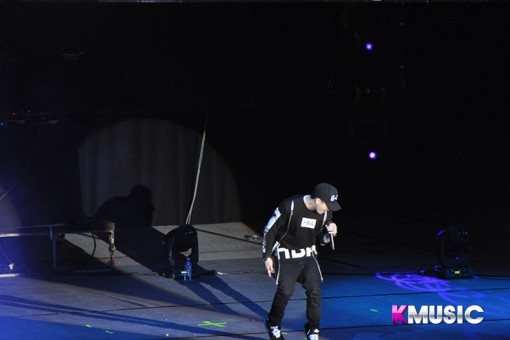 After DJ FiLi and Newko’s exit, a dance/choreography group, T.M.F (TROUBLE MAKERS FAM) danced to Taeyang’s ‘RINGA LINGA’, evoking the audience’s reaction immediately. Right after the dance performance, the selected dance students from the previous day joined the team to dance to ‘ONE OF A KIND’ by G-Dragon, showing fantastic rapport after only a few hours of practicing together.

‘The God of R&B’ Wheesung showed an amazing live with a number of songs to show off his vocal skills. He sang his popular songs, such as ‘Insomnia’ and ‘With Me’. During the performance of ‘Insomnia’, the song stopped accidentally in the middle part. However, Wheesung showed his professional self and continued singing, unaccompanied, able to finish the stage safely. The fans showed great respect on how he did not show even a bit of confusion and panic.

Alexander performed his cute, lively song ‘I Just’ – putting in multiple fan-services, such as pointing to a certain group of fans. After his song, he spoke to the fans “I haven’t performed this song for over a year. Hey, you know what? I’m 25 years old. What I learned was that no matter how old, you can still be cheesy and cute.” After this little moment, he proceeded with the song ‘Oh! Baby’. After another cute performance, he said, “I heard Cantonese”, then started speaking in the language for his Cantonese fans that were there at the concert. This got a lot of reaction out of the audience, and Alexander fanned himself, as he seemed heated. He said, “Oh my god, I’m so hot. Wait no.” The fans cracked up in laughter, as Alexander seemed even more flustered to what he said. 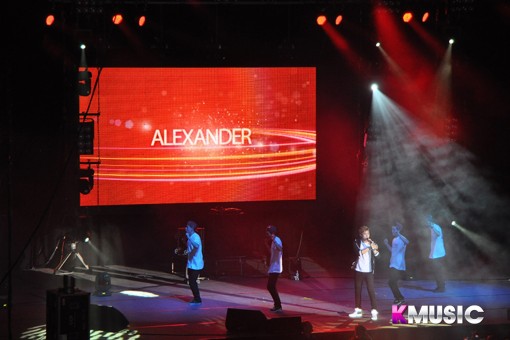 Ailee showed a powerful entrance through the screams of many fans, as she immediately started on a dance choreography that included a chair and other female dancers, to Beyoncé’s ‘Crazy In Love’. After, she exclaimed, “So many Aileeans today. Actually, my show in Sydney got cancelled. It’s alright, because I’m in Perth now”, showing her appreciation for the Perth fans. She said, “Please sing along with me” as she started on her debut song, ‘Heaven’. Then she proceeded onto her other hit songs, ‘I Will Show You’ and ‘U&I’, which created an uplifting fan-chant in the audience. Many male fans who have only clapped during the earlier performances joined in the shouting and screaming to support Ailee and her stage. 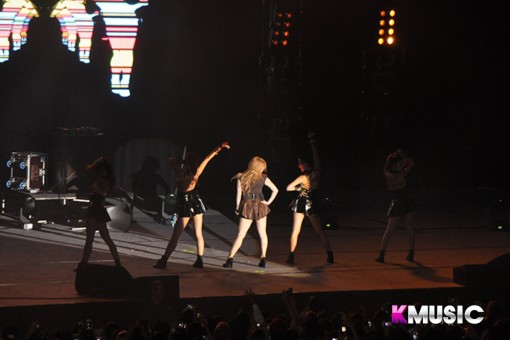 As Alexander introduced the final group, he said, “I said I was hot earlier, but I can’t be as hot as five guys!” This caused many fans to eagerly yell for the five males. MBLAQ appeared through a stage of smoke. They started off with the favorite, ‘Mona Lisa’, then moved onto ‘This Is War’, their newest song ‘Smokey Girl’ and finally their catchy and memorable debut song, ‘Oh Yeah’. 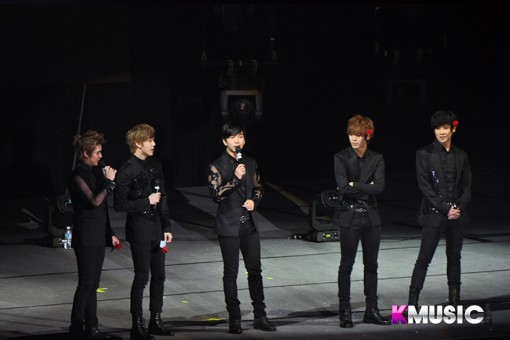 The 2K13 FEEL KOREA CONCERT at Korea Week in Perth could be proudly named as a successful event. The artists have discovered another huge fan base in Australia, and the fans were able to experience what would push them further to be a supportive K-pop fan. It was truly a striking night which I’m sure will be remembered by many, and might trigger future events in Perth similar to this.