K-EXCLUSIVE: 6 moments when MONSTA X left us shook at their ‘We Are Here’ tour in Melbourne!

K-EXCLUSIVE: 6 moments when MONSTA X left us shook at their ‘We Are Here’ tour in Melbourne!

Melbourne was MONSTA X‘s last stop on the Australian leg of their ‘We Are Here‘ world tour. After performing in Sydney three days prior, they held their concert at Margaret Court Arena on June 8th. It was a night full of surprises, laughter and tears, to say the least. Below are seven highlights from the concert that simply left the audience shook.

MONSTA X is known for their mind-blowing charisma on stage (this is a reference to Joohoney‘s iconic line “excuse my charisma” in their debut song ‘Trespass‘) and they certainly did not disappoint with their explosive performances. The concert started off with a bang when they performed ‘Shoot Out‘, followed by ‘Hero‘, and then a rock version of their debut track ‘Trespass‘. These fast-paced and beat-heavy songs energised the crowd for the amazing night that would follow. 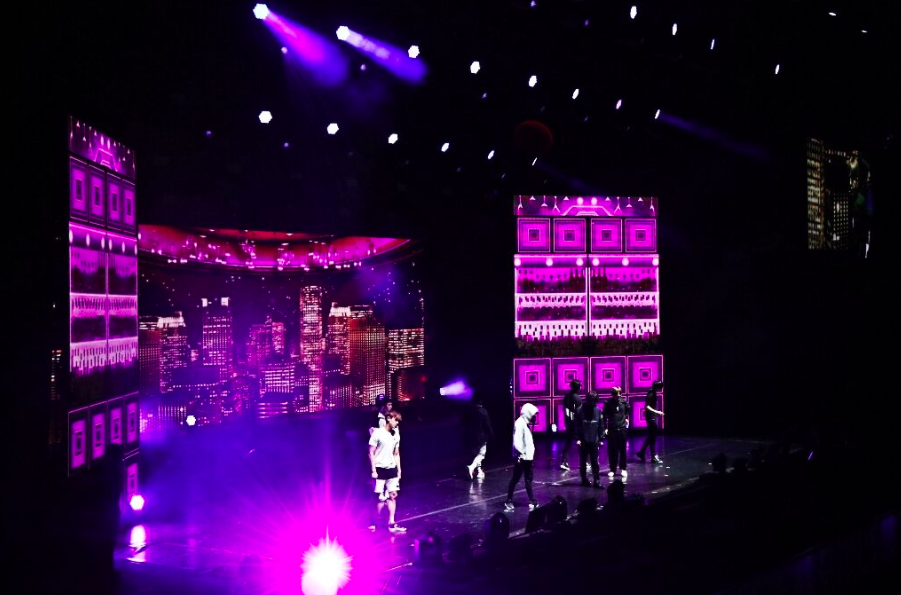 Continuing with this highly energised atmosphere after introducing themselves, MONSTA X then performed ‘Party Time‘. They brought a large table onto the main stage and sat around it. Once the chorus hit, they got up and started performing their choreography which involved a lot of drinking actions. Next, they performed ‘Play It Cool‘, which was a collaborative track with DJ Steve Aoki. These songs had the audience grooving to the beat. Joohoney even sang a snippet of ‘Play It Cool‘ in English.

MONSTA X also performed ‘Mohae‘, a song in which I.M produced, wrote, composed, and wrote the lyrics to. It featured Kihyun‘s iconic high notes. After, they performed ‘Jealousy‘.

Although ‘Myself‘ had a more serious mood and there was no choreography, the performances were still explosive as they continued with their hit song ‘Dramarama‘. While they were talking to the audience after this stage, the group asked the crowd to stand up to have a battle against them in terms of how hyped everyone was. Everyone got onto their feet and jumped and danced when they performed ‘Oh My‘, ‘Special‘ and ‘Falling‘. It was like MONSTA X was partying with the crowd.

MONSTA X dedicated a portion of their concert to special unit stages. Each unit could more effectively portray to the audience their talents and strengths. 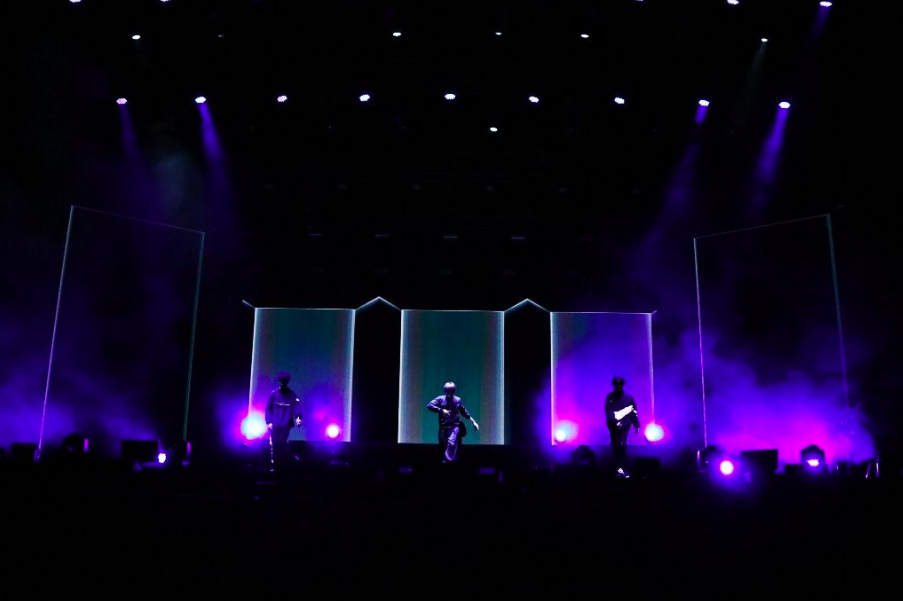 The first unit to perform was made up of Hyungwon, Kihyun and Minhyuk. Their performance involved a sensual dance coupled with their breathy vocals while they were suited up. They performed a cover of Bazzi‘s song ‘Myself‘. Later, the trio explained that since they are all the same age (all born in 1993), they decided to make a song together. Their concept was “gentle sexy“, according to Kihyun. 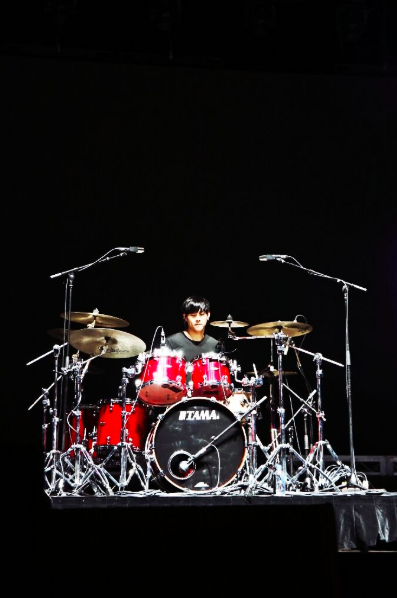 The rap line, I.M and Joohoney, performed next. Their rap stage had an underlying traditional vibe as they wore traditional clothes as well. During the bridge, Joohoney impressed the audience by powerfully playing the drums. Shortly after, I.M came back out rapping while Joohoney was still on the drums. The “triple” in the title of this song ‘Triple Hit Combo‘ was strategically chosen – one for I.M, one for Joohoney and one for Monbebes. 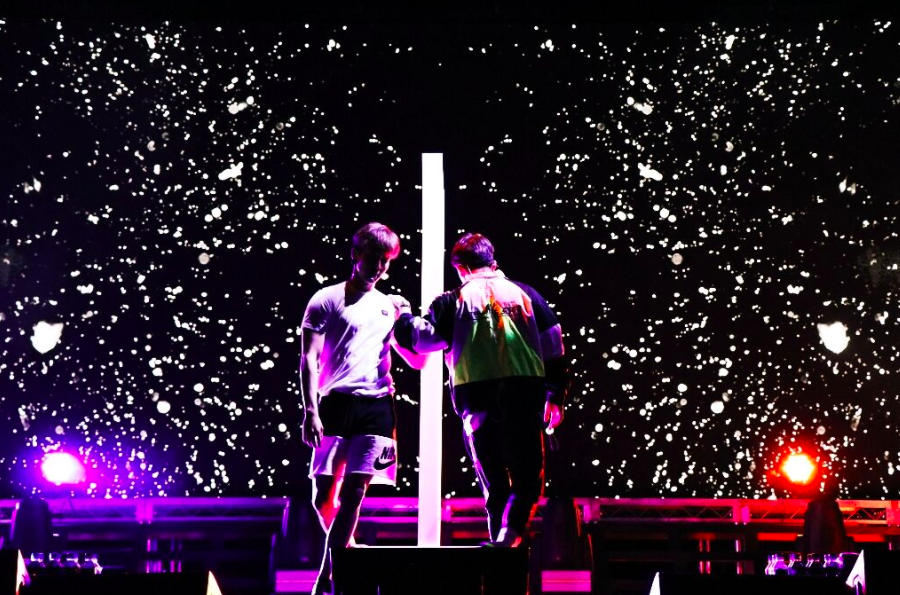 Lastly, Wonho and Shownu, as the main dancers, performed to the song ‘Mirror‘, which was produced by Wonho while thinking about Monbebes. He sees Monbebes as a mirror so he wants to look at his fans and smile. With just a screen separating them and a couch on each side, each member took one side of the stage to perform a sexy choreography. According to Minhyuk, the dancer duo’s concept was “beast sexy“.

Right after the unit stages, MONSTA X put on a cute stage in schoolboy outfits, which is a complete contrast to their sexy unit stages. They performed ‘Honestly‘, ‘I Do Love U‘ and ‘White Sugar‘. These songs had cute choreographies and the group had a fun time playing on stage. At one point, streamers shot up into the crowd and even onto the stage. Hilariously, I.M got a streamer stuck around his foot and he had a tough time trying to shake it off.

Their first VCR saw the MONSTA X members posing as YouTubers, known as “MonTube“. Minhyuk was a beauty vlogger, I.M was a multilingual teacher, Wonho was a fitness enthusiast, Jooheon conducted cooking tutorials, Kihyun was a barista, Hyungwon gave fashion advice and Shownu did mukbangs and ASMR. Wonho taught simple exercises since he wanted to personally massage everyone, but he couldn’t. When Kihyun was a barista, he described members as types of coffee and compared. Shownu sang in ASMR-style to ‘Alligator‘ and ‘By My Side‘, which highlighted his gentle voice. This entertaining VCRs gave a better glimpse to fans of the members’ fun personalities. 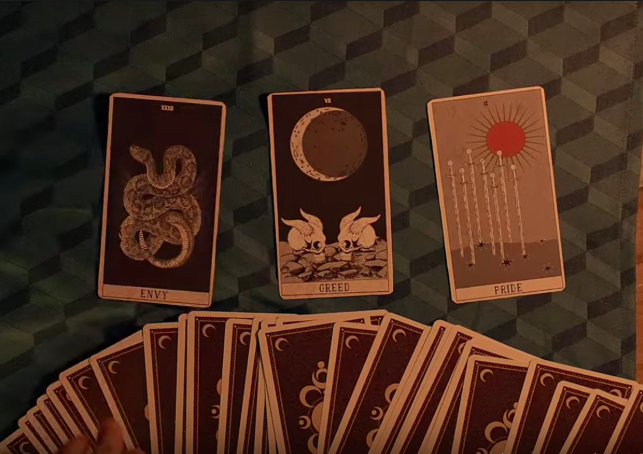 The next VCR was much more serious. Similar to the concept in their ‘Shoot Out‘ comeback, each MONSTA X member represented one of the seven deadly sins. The VCR started with I.M turning himself in to the police. Hyungwon was pride, I.M was envy, Kihyun was loneliness, Joohoney was greed, Wonho was sloth, Shownu was wrath and Minhyuk was agony.

Each member explained their crimes and flaws to the camera. Different scenarios were shown, such as Kihyun playing the piano, Wonho doing martial arts, Joohoney tattooing Shownu and I.M threatening to shoot Hyungwon. A sweet moment showed Minhyuk and Kihyun being together instead of alone. The seven deadly sins were personal prisons that they inflicted upon themselves. At the end, the group ran together to the ocean in a beach setting, showing that their brotherhood conquered all.

5. H.One and MONSTA X turned the concert into a rave 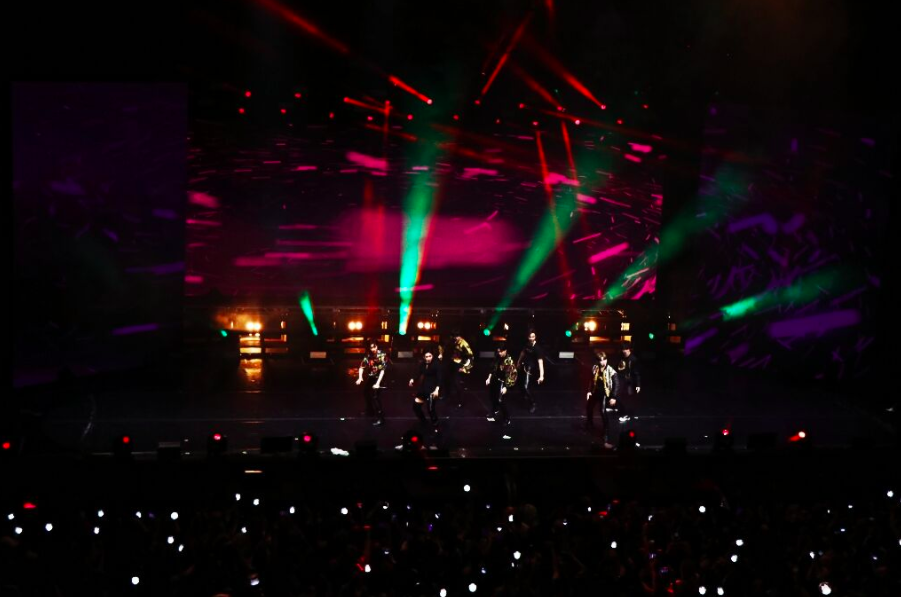 After performing their most recent title track ‘Alligator‘, Hyungwon took on his alter ego as DJ H.One. His DJ set included remixes of the English hit songs ‘Don’t Let Me Down‘ and ‘Faded‘. During the latter, the rest of the group joined him on stage to dance and hype the audience up. At this point, the audience were already on their feet and dancing. Hyungwon‘s members assisted him in DJ-ing his set. Soon, MONSTA X and Monbebes were all dancing together. They performed their song ‘Rodeo‘ and it truly felt like a rave.

Throughout the night, MONSTA X talked and interacted with fans, whether it was through ments or just while they were performing. Before they performed ‘No Reason‘, the group talked about their favourite things in Melbourne such as going to the zoo. Then they discussed the strengths of the group and how they would always support Monbebes. ‘No Reason‘ was dedicated to fans. This song in particular displayed the vocals’ high-pitched voices which contradicted the rappers’ deep voices. 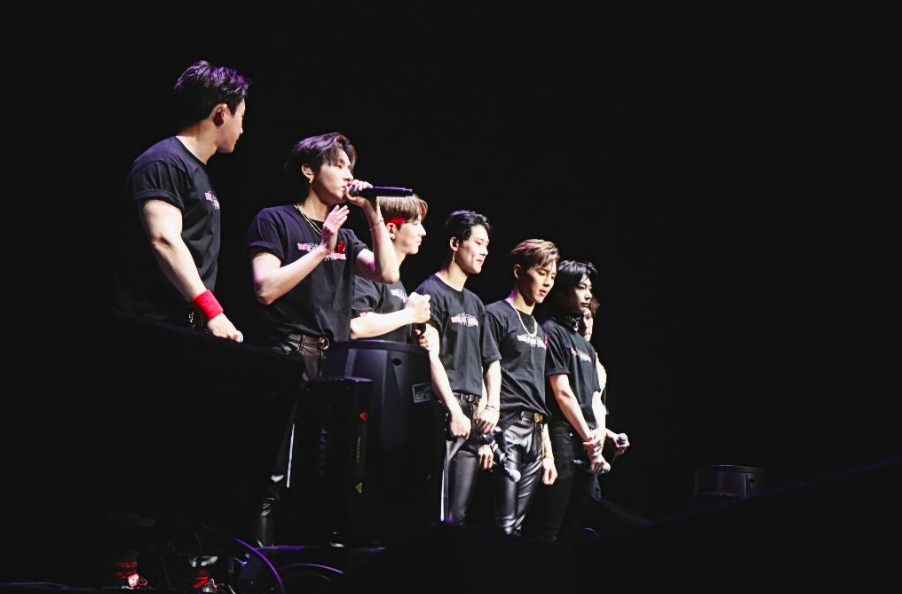 Before their encore stage, MONSTA X gathered on stage together to talk about the concert. They stated that they want to come back to Melbourne soon because they had such a precious time together with Monbebes. Wonho chose to speak English specifically for this concert even though he was not confident in his skills, but he wanted to do it for his Melbourne fans. He proceeded to give a heartwarming speech to Monbebes. Shownu enjoyed his free time in Melbourne as he made beautiful memories in Australia.

Joohoney chose to speak in Korean so that he could say more to us. He felt like during the concert MONSTA X connected with Monbebes and became one together. He even said he would see Monbebes in his dreams. Minhyuk thanked Monbebes for showing him so much beauty. Meanwhile, I.M said he was a bit sad because his health was not in the best condition, so he had to stay in the hotel while his members explored Melbourne. He was upset that he couldn’t see beautiful views in Melbourne. I.M even called the Melbourne audience a beautiful view. I.M, Joohoney and Wonho teared up during their speeches. The group stated that they made so many amazing memories in Australia, but the best part were Melbourne Monbebes.

MONSTA X said that even though the concert was ending, their love for Monbebes would continue. They wanted to end their concert like a happy ending. Their last song was the sentimental and emotional track ‘By My Side‘, which was dedicated to Monbebes.

They took photos with their Melbourne audience. Check them out below!

MONSTA X definitely knew how to put on a show during their ‘We Are Here‘ world tour in Melbourne. Their concert showed so many different sides of them, making it a memorable night for anyone who attended.

We would like to thank Frontier Touring for giving us this amazing opportunity to cover this event.