After two years, B.A.P came back to Düsseldorf, Germany, on the May 15th, 2016 with their new tour, “LIVE ON EARTH 2016 Tour: AWAKE.” Their the show was sold out within only a few days and the anticipation to see Yongguk, Himchan, Daehyun, Youngjae, Jongup, and Zelo with their own eyes only grew as the concert date neared. 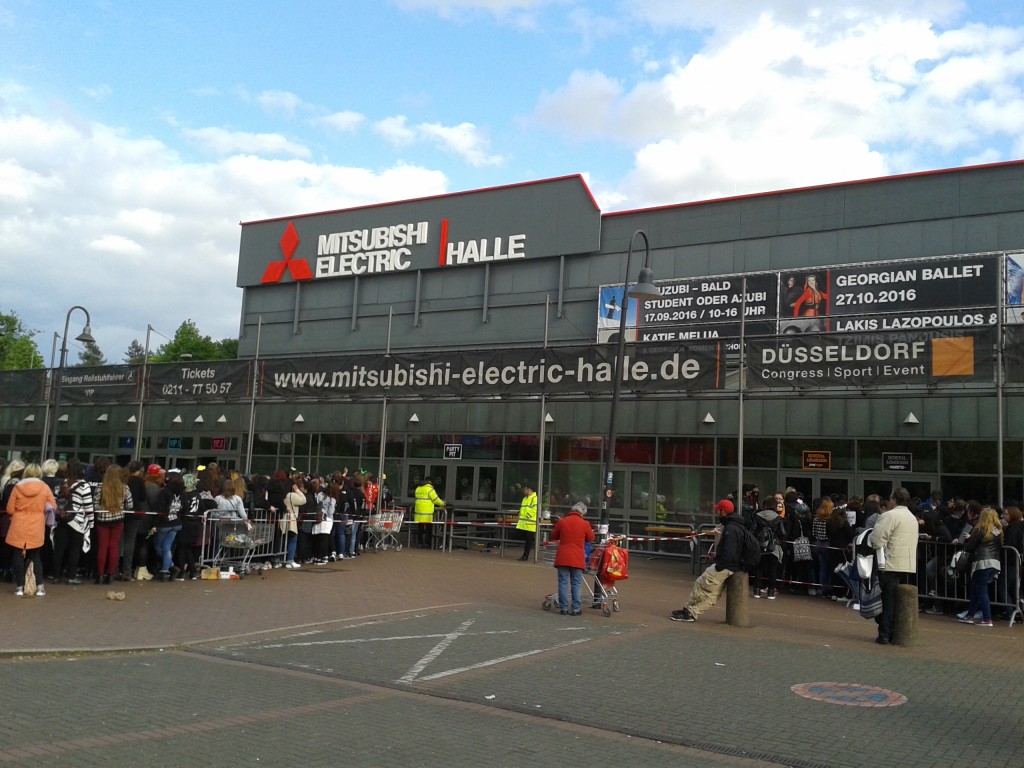 The fans waited in front of Mitsubishi Electric Hall for hours and hours in the cold and windy weather. Just when some started to lose hope, the crowd in the front shouted out in joy when the doors finally swung open. The fans were slowly allowed to enter the venue and find their place, running frantically to find the best spot to enjoy the concert from.

The concert started off with a staff member on the voice-over stating that B.A.P. hopes the fans will enjoy the concert as much as they will. After a short and kind reminder to enjoy the concert with all our senses—not through our smartphones, the hall went dark and the fans got ready for the night of their life.

The intro video followed shortly with a mystical alien voice asking us “Where?”, “Where are you?”, “Where are you now?”, “Who?”, “Who are we?”, “Why are we here?”, “Take a deep breath”, “Imagine your eyes speaking… and follow our beating heart. AWAKE!” It was only a start to a night that did not allow the fans to take a break from chanting and enjoying the show they will remember for a lifetime. And when the countdown started on the screen, the hall was shivering with excitement of almost 4.500 Babyz who came to see their idols. 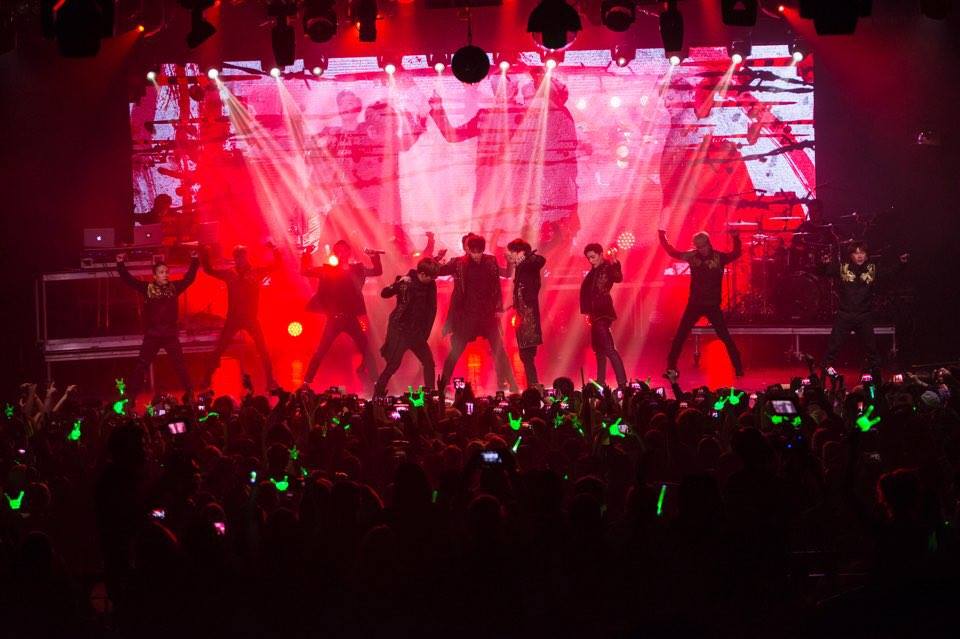 The six members appeared on stage short after, starting the night with “Warrior”, straight following with “What The Hell”. With no time to calm down, the song “No Mercy” followed and the hall was filled with strong fanchants. The boys inserted part of “We will rock you” by Queen, into the chorus at the end, making the fans more passionately scream along with them.

After such a fast start off of the concert, it was time for a solo performance and the first one to appear on stage was Himchan with “S.N.S”. Himchan was wearing a fitted suit. Looking classy and sexy, he showed off his great dancing skills. Yongguk joined this stage for a while with his rapping and finally, Himchan gave the ultimate fan service when he took off his suit jacket and danced even more passionately.

The fans were granted a fun time with B.A.P as they started singing “SPY” and “Be Happy”. The members showed off their individual dancing skills during short solo dances, sparkling with energy and shooting smiles in every direction. The song “Be Happy” was accompanied by colorful and comic-like videos on the big screen behind the stage. The boys were having so much fun on the stage and it was obvious the whole hall was feeling the same incredible happiness. 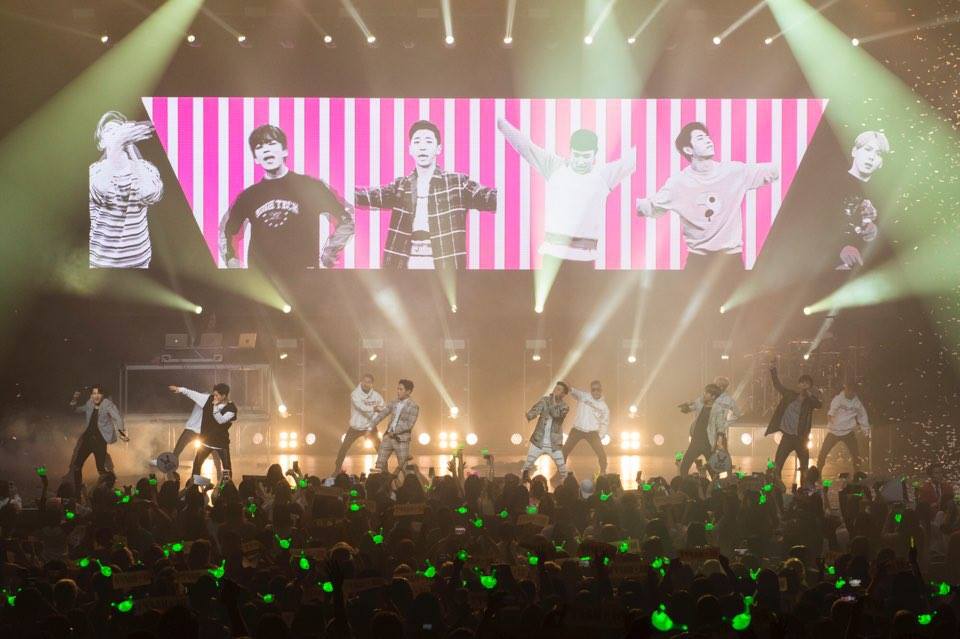 The idols then took a short break from the show to introduce themselves to the fans. The crowd showed an incredible power when Himchan asked them to “Make some noise!”. The response from fans was deafening. Daehyun´s “Did you miss us?” received the same powerful feedback. Youngjae then asked several times “Who is me?”, making the crowd shout his name out excitedly. Jongup and Zelo received no smaller welcome from the Germany Babyz, especially when Zelo acted cute and adorable when introducing himself. Leader Yongguk asked “What´s up?! B.A.P´s back!”  and that was enough to make the fans welcome him with loud screaming as well.

Himchan, Youngjae and Jongup then introduced the next song “Feel so good”, which was included in their most recent Korean album.
Himchan: “This is the second time we are in Germany. We are so happy to be here again.”
Youngjae: “Just like the previous song “Be Happy”. Are you guys happy now?”
Jongup: “The next song will also make you happy – Feel so good.”

“Feel so good” was followed by a song that was also included in their latest album – “Carnival”. The group started this song by singing the chorus part together with fans! After a short a summer party song, Jongup came up with his own solo stage, performing “Now”. The stage was lit up in soft pink haze and Jongup mesmerized fans with his amazing voice.

The boys came to the stage together to warm up the fans again with “Hurricane”. B.A.P introduced a remixed version of this song and it felt like being on the best disco ever. Right after “Hurricane” they continued with “Badman”, showing off their fierce dance. The song was followed by “Dancing in the rain” straight away and it was accompanied by fans clapping their hands in the air. Babyz were also encouraged by the group to jump and scream at the top of their lungs, and the fans happily complied. By the time the song “Bang 2x” started to play, the floor under our feet was jolting to the rhythm and the fans were energetically supporting the boys performing in front of they eyes. 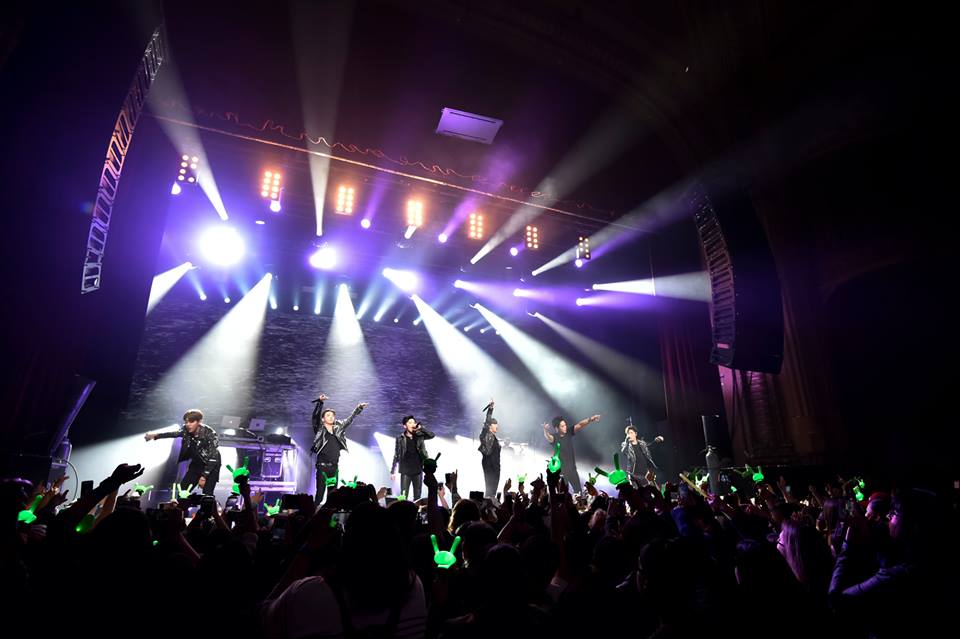 To calm down just a bit, a video showing all members during different events was shown on the screen. It was a short time given to fans to gather themself for the upcoming hot solo stage by Zelo. He started with dancing to “I can´t feel my face” by The Weeknd and “GDFR” by Flo Rida. Zelo showed himself as not only the cute maknae, but also very sexy and admirable dancer. The stage then changed into a luring slow dance performance when Zelo started dancing to “Pillowtalk” by Zayn Malik amidst a sexy and sultry, fog-filled stage.

After this solo, a VCR video with records of all wars from 1914 to present was shown and the whole group came to the stage again to perform their so loved “One Shot” and “Kingdom”. The boys showed on stage all wearing black pants with decorated long coats or jackets. After a short pause during which they left their overcoats backstage, they came back to continue the concert with “1004” The fans joined in with amazing fanchants during the second part of this song – they practically sung a whole part of the song themselves! It was amazing to see that the fans know the lyrics in detail and showed their love for the boys by singing it loudly. The beautiful voices of Babyz continued to sing along with B.A.P during “With you”. The fans sang with beautiful synchronization and sent the boys small and big hearts using their fingers or arms. This song was introduced to the fans as the last song of the concert but everyone knew it cannot be the last song of the night. The whole hall started chanting “B.A.P! B.A.P! B.A.P!” after the members ran backstage to change their clothes once again.

“Young, Wild and Free” followed after a short intro on the screen narrated by Yongguk. The fans howled to the rhythm even  before the boys re-appeared on the stage, this time wearing concert “Awake” shirts and hoodies fans could purchase before the show. The fierce lyrics made the whole venue come alive again with very energetic fanchants. 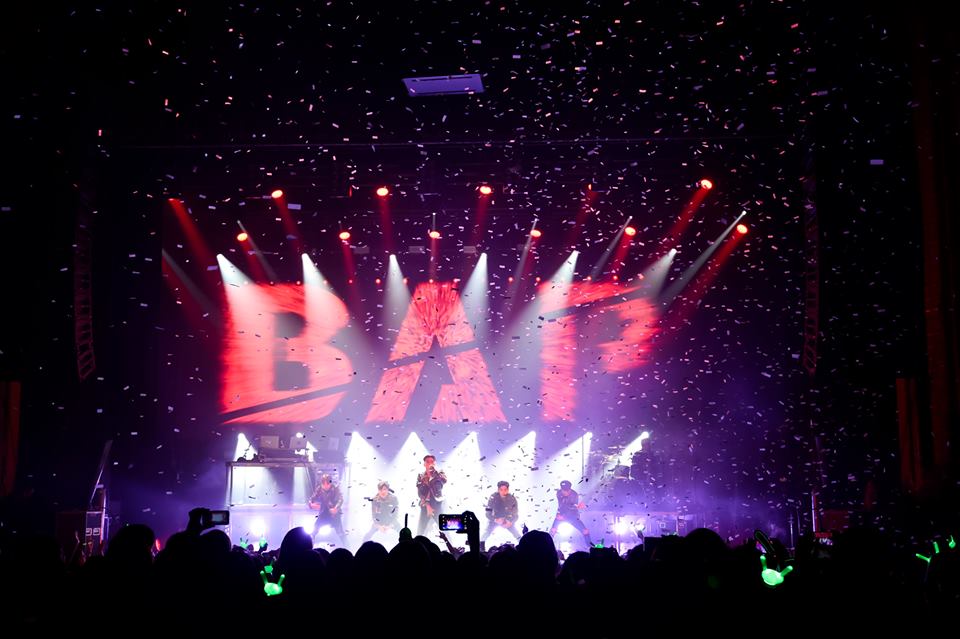 During the last Ment of the night, Jongup asked fans if they can speak in Korean as they have so much to say. Each of the members then expressed their happiness to be in Düsseldorf again and to be joined by so many fans on their concert. They promised to come to Germany in the next year, making the fans shiver with anticipation already. The fans broke into chanting “Saranghae!” several times after hearing how much the boys enjoyed their time in Germany and how much they love all the fans who came to see them tonight.

Yongguk was the last to speak, saying “It feels like chilling in a great club tonight! I love you guys all, I respect you all!”

The group then performed “Excuse me” as one of their last songs of the night. During this song Himchan took several photos of the fans from stage and the German flag with a Matoki made its way to the stage as well. When fans thought it was truly the end of the concert and they started to get up, the boys ran to the stage again to repeat their very last song “Bang 2x” as a final goodbye. Babyz also bid goodbye to idols with the loudest fanchants and screams of the night.

Yongguk, Himchan, Daehyun, Youngjae, Jongup and Zelo performed an amazing concert in Düsseldorf, bringing together fans not only from Germany, but from different parts of Europe as well. This concert will, for sure, remain an unforgettable memory for the thousands of fans that came to see them in Germany. We look forward to see B.A.P´s future work and stages!

The full setlist for Düsseldorf stop:

We would like to thank Twisted Talent for giving us the opportunity to cover this event! Stay tuned to Officially KMusic for more coverage of K-Pop event.