Chicago got one heck of a show as the boys of Bangtan Sonyeondan hit the stage!

After a much needed few days off from their current live trilogy tour—‘Episode II: The Red Bullet,’ BTS definitely did not disappoint. With fans flying in from even Holland and Russia, the venue was packed to the rim with A.R.M.Ys that were more than ready to bring the house down chanting ‘B-T-S’ even before the concert started. BTS definitely brought the heat up in the Rosemont-Chicago venue July 24th. With the many fan projects that were set up by A.R.M.Ys, the venue was lit up like the night sky by all the BTS Bomb Light Sticks, flashing bracelets, foam sticks, and glowing fan signs.

The boys kicked off the concert with their blood pumping song ‘N.O’ as the crowd exploded at their appearance. After ‘We Are Bulletproof Pt. 2,’ they each introduced themselves in English. Rap Monster and Suga even called Chicago Chi-town. After ‘We On’ and ‘Hip Hop Lover,’ they slowed things down with a few ballads. 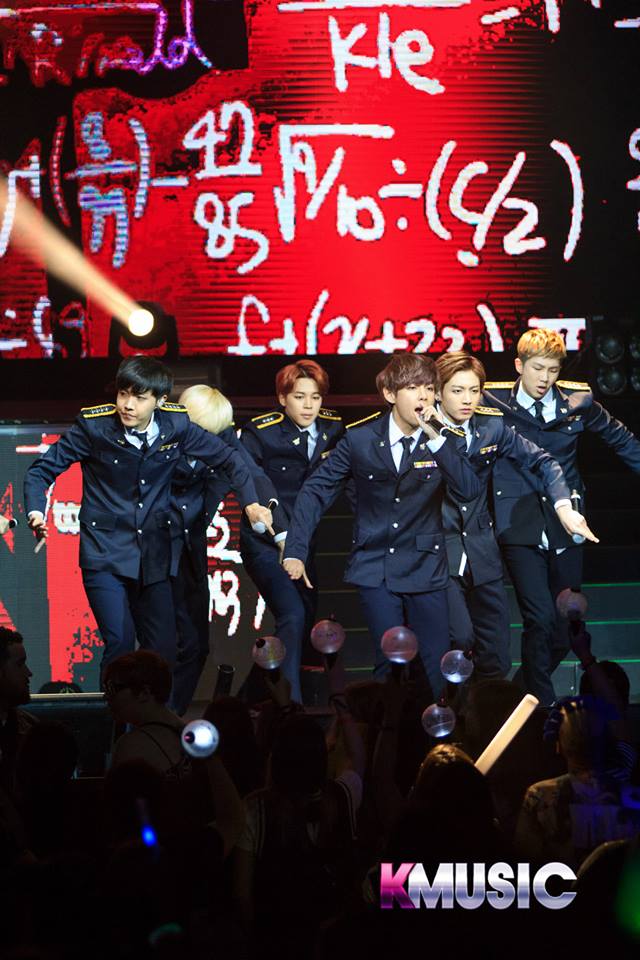 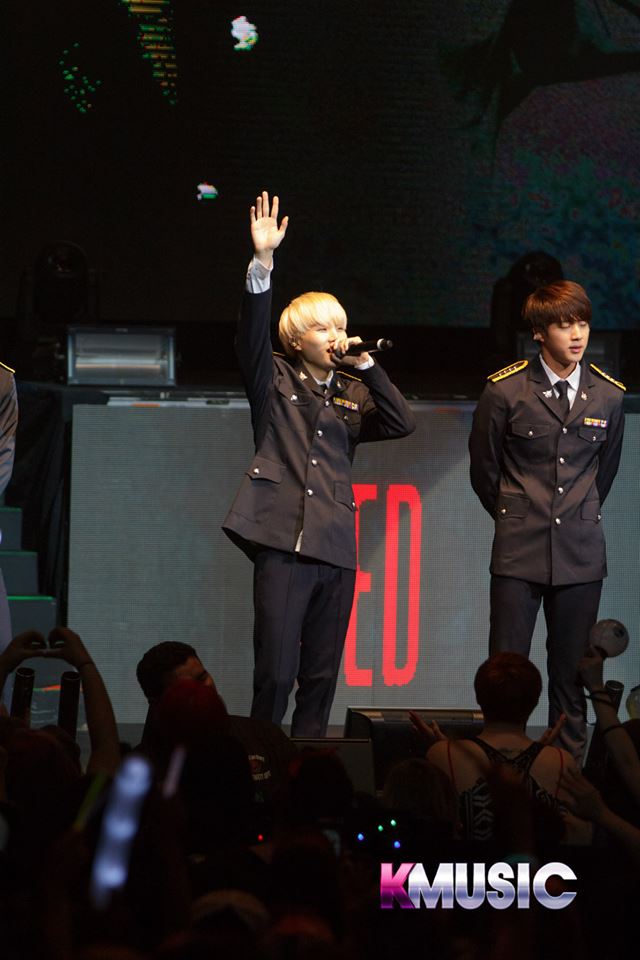 They were very excited to be on stage, and it definitely showed through their fan interactions. From J-Hope throwing hearts to fans throughout the whole night and Jimin high fiving and patting fan’s heads, there was no lack of fan interactions. Jungkook, who lost in rock paper scissors, did his aegyo dance at the end of ‘Look Here,’ only to be followed by Jimin and then Suga’s aegyo dances too. Jimin’s abs made another great appearance in ‘No More Dream.’ 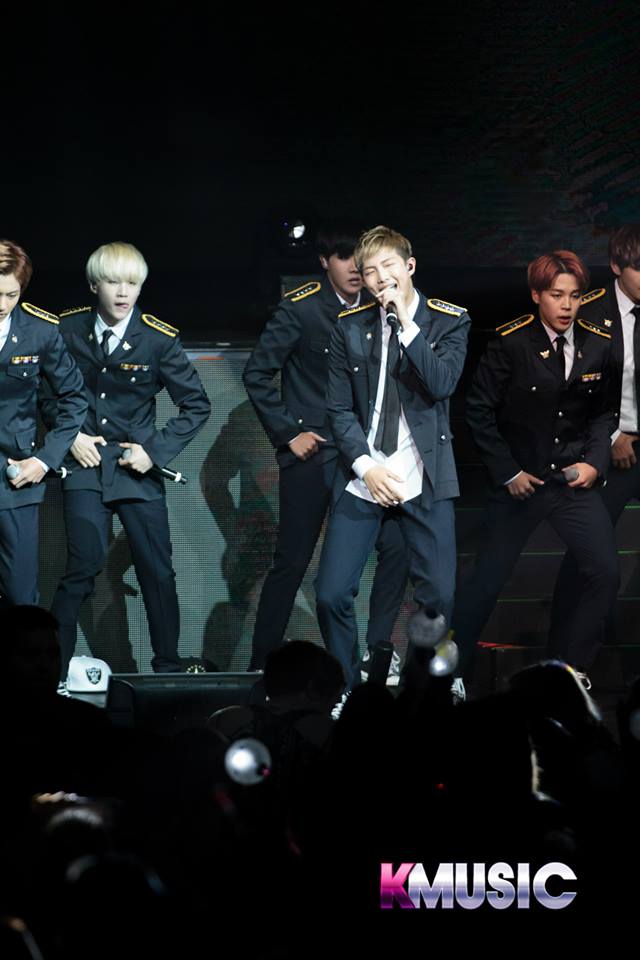 During ‘Miss Right,’ BTS asked the fans to sing along with them, and although everyone tried hard, J-Hope mocked the audience members in a teasing and cute way. ‘Cypher Pt. 3’ tore the venue apart as fans were set ablaze by Suga, Rap Monster, and J-Hope’s energy. The crowd sang along with the members as ‘I Need You,’ from their latest album—The Most Beautiful Moment in Life, Part 1, came on. 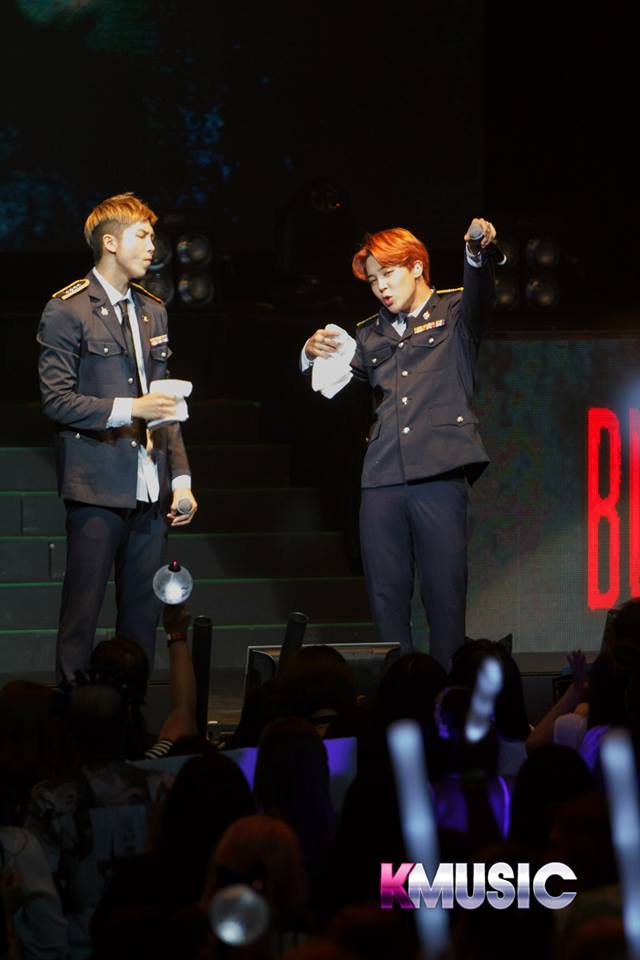 The boys seemed to really enjoy their time here as they expressed their love for Chicago and Chicago’s A.R.M.Ys in the ending talk. Suga even stated that he will, “never never never ever ever ever forget (the fans) in Chi-town” and asked for them to never forget him. The members asked for the fans to wait for them and that they will come back to Chicago soon. But the show couldn’t have been over yet, OF COURSE NOT! The fans wouldn’t let the boys leave with out an Encore!

The encore started with a video that took a look back at the road that the group has traveled on to get to where they are now. This video that tugged at the fans’ heartstrings started off with clips of the boys predebut. This led into their self-reflecting song ‘Path.’ The concert ended as the boys sang ‘I Need You’ again one last time.

The concert showcased how talented BTS was and how bright of a future they have ahead of them. From their difficult yet impeccably executed choreography to their smooth singing voices and their intense rapping, BTS is definitely a group with great stage presence and potential. Their charismatic performance is sure to have left a great memory imprinted in within all the concert-goers’ brains. They are definitely a group that everyone, even non-KPop fans, should see at least once in their lifetime, if not more.

Officially Kmusic would like to give a HUGE ‘thank you’ to SubKulture Entertainment for allowing us to attend and bringing such an amazing tour to the U.S.