(This is a repost of our original review – updated with images courtesy of IME).

The boys are back! Aussie ARMY rejoiced on Friday as BTS took the stage in Sydney for the second time. From the UNSW Roundhouse in 2015 to Qudos Bank Arena; arguably one of the most high profile Sydney venues around, Bangtan Boys have come so far.

I’m sure that I wasn’t the only one that thought BTS had flown so high that we may not see them again. Two years ago: Jin, Suga, J–Hope, Rap Monster, Jimin, V and Jungkook performed at the UNSW Roundhouse for an audience of a few thousand. Fast forward just two years, and that few thousand turns into an audience of over fifteen thousand! They also won a Billboard Music Award earlier this week to top off their successes! ‘BTS Live-Trilogy Episode II: The Red Bullet‘ may have been unforgettable, but ‘Episode III: The Wings Tour‘ was bigger and better.

The show kicked off with a short video to hype up the fans. Think cool and calm piano crescendoing into a thunderous storm of awesomeness. Long shots zoomed in and out of each member while everyone screamed in support of their biases.

As with GOT7‘s Fanmeet earlier this year, the curse of the curtains continues. When ‘Not Today‘ began, only one half of the curtain was pulled down while the other caused a few more problems. Fear not people! Staff moved very quickly and pulled the other side down post-haste… P.S. There must be a better way to remove curtains.

Despite the curse of the curtain, ‘Not Today’ was an energetic start to the night. A fifteen-member dance ensemble created depth as fire heated up the stadium. 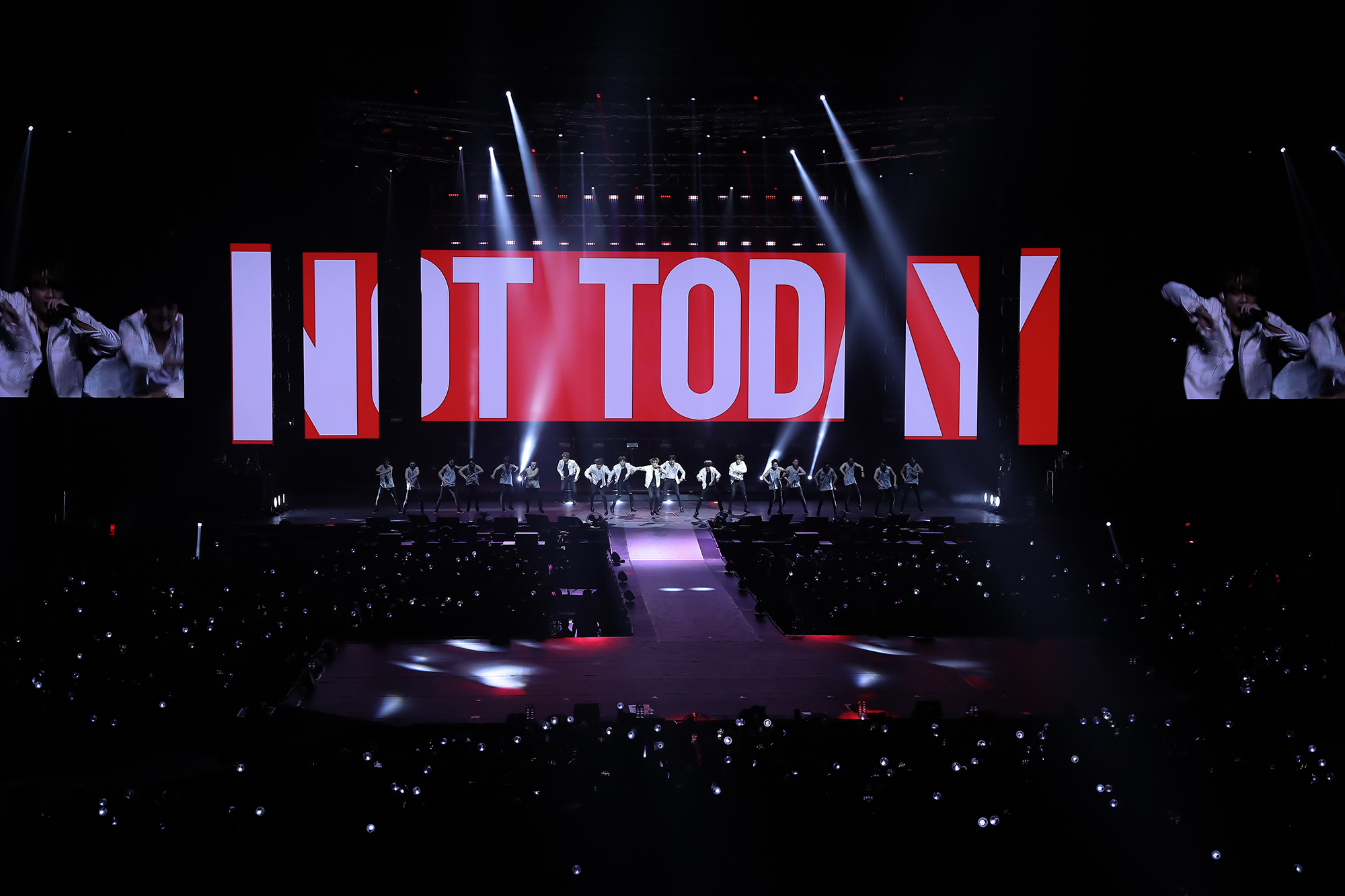 A short introduction by the boys followed their first song. Each member caught their breath as they tried to deliver some special messages to the fans.

“Hope!” The Audience shouted back.

Jin gave a kiss to the crowd and the boys continued on with ‘Am I Wrong‘ and ‘Baebsae‘. ‘Baebsae’ featured a seductive three-step snake slither and J-Hope nae naed. Things were going very well.

‘Dope‘ followed and the crowd went crazy. It was as if they had more energy now that than previous two songs… And yet they didn’t get a break in between! Rap Monster pulled the crowd in and has the audience fill in the lyrics for one of BTS’s most iconic tracks. He held the mic to the crowd: “Enemy, enemy, enemy!” The crowd shouted. 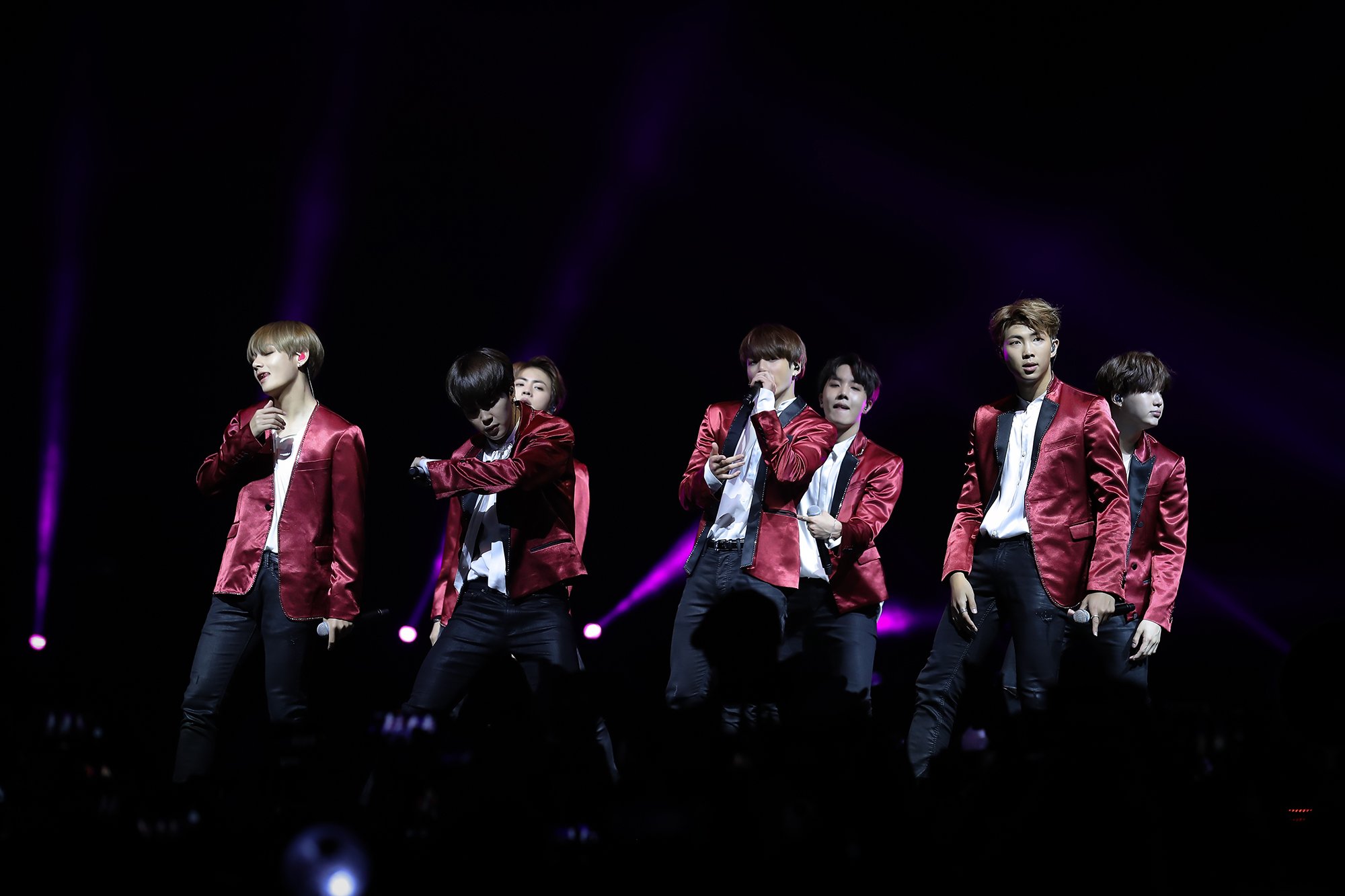 Next came the solo tracks. These were slower and not quite as hype as the former, but every member delivered. Jungkook’s beautiful footwork in ‘Begin‘ reminded us that in another life, he may have been a tap dancer. Jimin danced blindfolded to ‘Lie‘, Suga performed ‘First Love‘ and the boys came together again for ‘Lost‘.

When the slow tracks were said and done, all seven members ran onto the centre stage after performing at the base one thus far. It’s fitting that they ran, because their next song was ‘Run‘.

Legs flew left and right and Rap Monster gave the fans a thumbs up. The boys fell to the ground and everyone knew what came next… ‘I Need You‘ had BTS doing a fidgety dance on the ground until resurrecting themselves to sing.

Next up – solo songs again. Rap Monster scaled things back with an ocean themed performance of ‘Reflection‘. A whale featured in the background as he told us to “go with the flow.” How on the nose. V took ‘Stigma‘ to a new level with a black and white aesthetic to support his powerful performance.

J-Hope’s ‘Mama‘ deserves a special mention. A butterfly adorned colour show featured behind him and was a pleasantly fun departure from the more angsty or emotional songs before it. The boys carried him during his performance and it was sweet. Jin’s ‘Awake‘ followed as fans cheered his real name: Kim-Seok Jin. 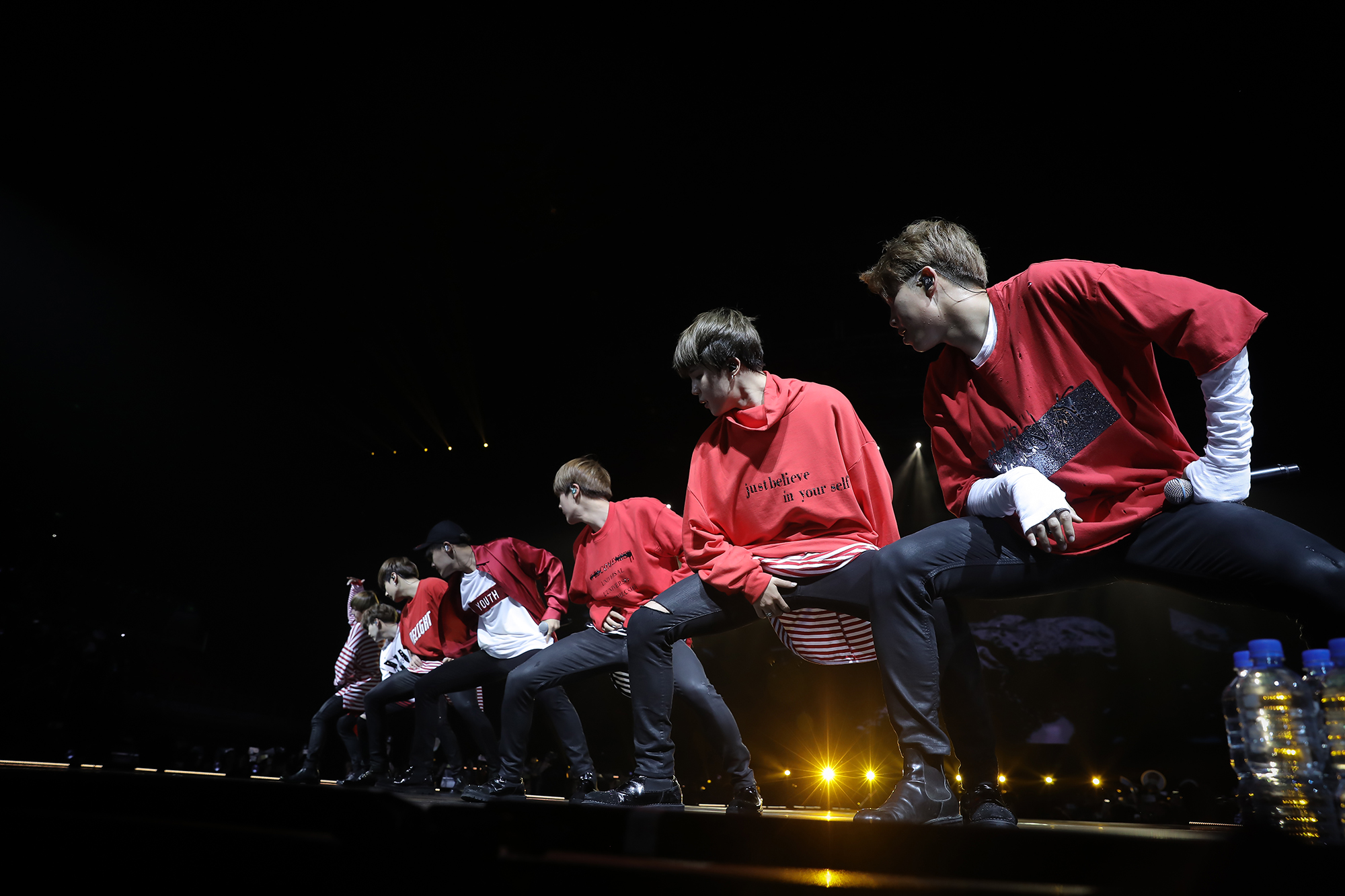 These solo tracks were a great addition to the show as they revealed the unique style of each artist. In many ways, they could stand on their own – but we know that the boys love each other too much to split off just yet!

Next up was a short video of BTS walking around a bright room.

Then the hype train returned.

‘BTS Cypher 4‘ is my personal favourite performance of the night. The crowd went wilder than they had been the entire night, singing “sorry bae” in unison.

With the last drop after Suga’s rap, the three rappers jumped frantically like a seven year old kid on a trampoline. I’ve been to rave festivals before, and I can tell you that the boys pulled a trick or two out of their book with this next one.

J-Hope threw water at the crowd to cool them down, followed by that blessed water bottle. It was then I thought, ‘BTS Cypher 4’ would totally work at a club. ‘Fire‘ followed, and it was lit. BTS danced in suitably red jackets with a release of energy. 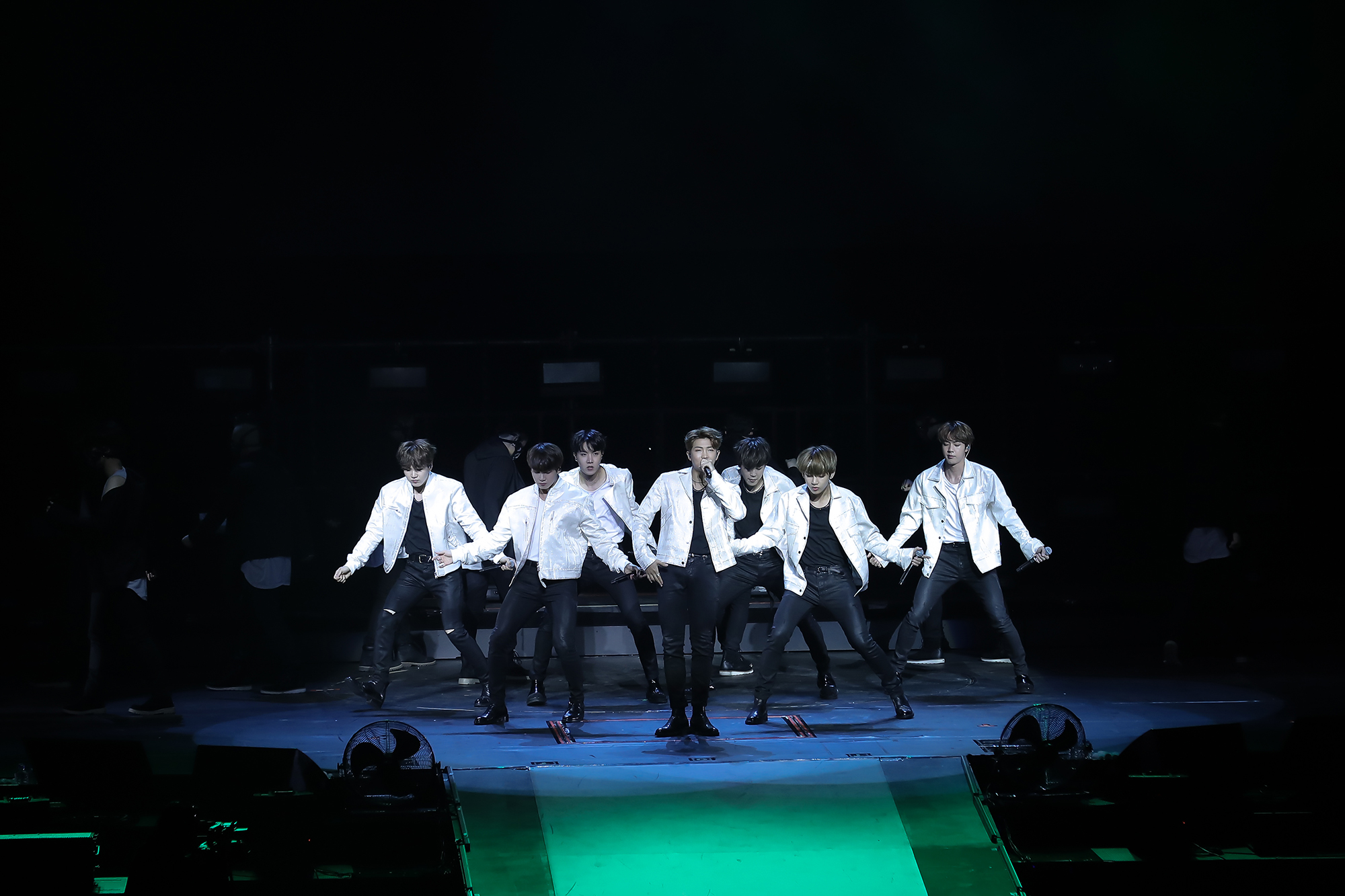 What better way to reach out to fans, old and new than with a trip down memory lane? BTS performed songs from as early as their 2013 debut.

Their journey took us through ‘N.O,’ ‘No More Dream,’ ‘Boy In Luv,’ ‘Danger,’ and ‘21st Century Girl.’ J-Hope jumped over the squad while he, Suga and Rap-Mon rapped hard and dangerous into the camera. ’21st Century Girl’ featured Jin blowing fish kisses to the crowd, booty slaps and a human train. ‘Blood, Sweat and Tears‘ followed and the tears streamed down the audience’s faces.

Before the final set of songs, a new video highlighted the BTS journey and gave the fans a lot to think about.

“How many roads must a boy walk to become a man,” the text read.

“Seven guys with one heart.”

“One heart with seven boys… Roads are another name for the world.”

After the video, out came the boys’ selfie sticks during their performance of ‘Interlude: Wings.’

“When I say fly, you say high,” Rap Monster said.

The boys gave their last words to Sydney with an extended catwalk along each side of the stage. 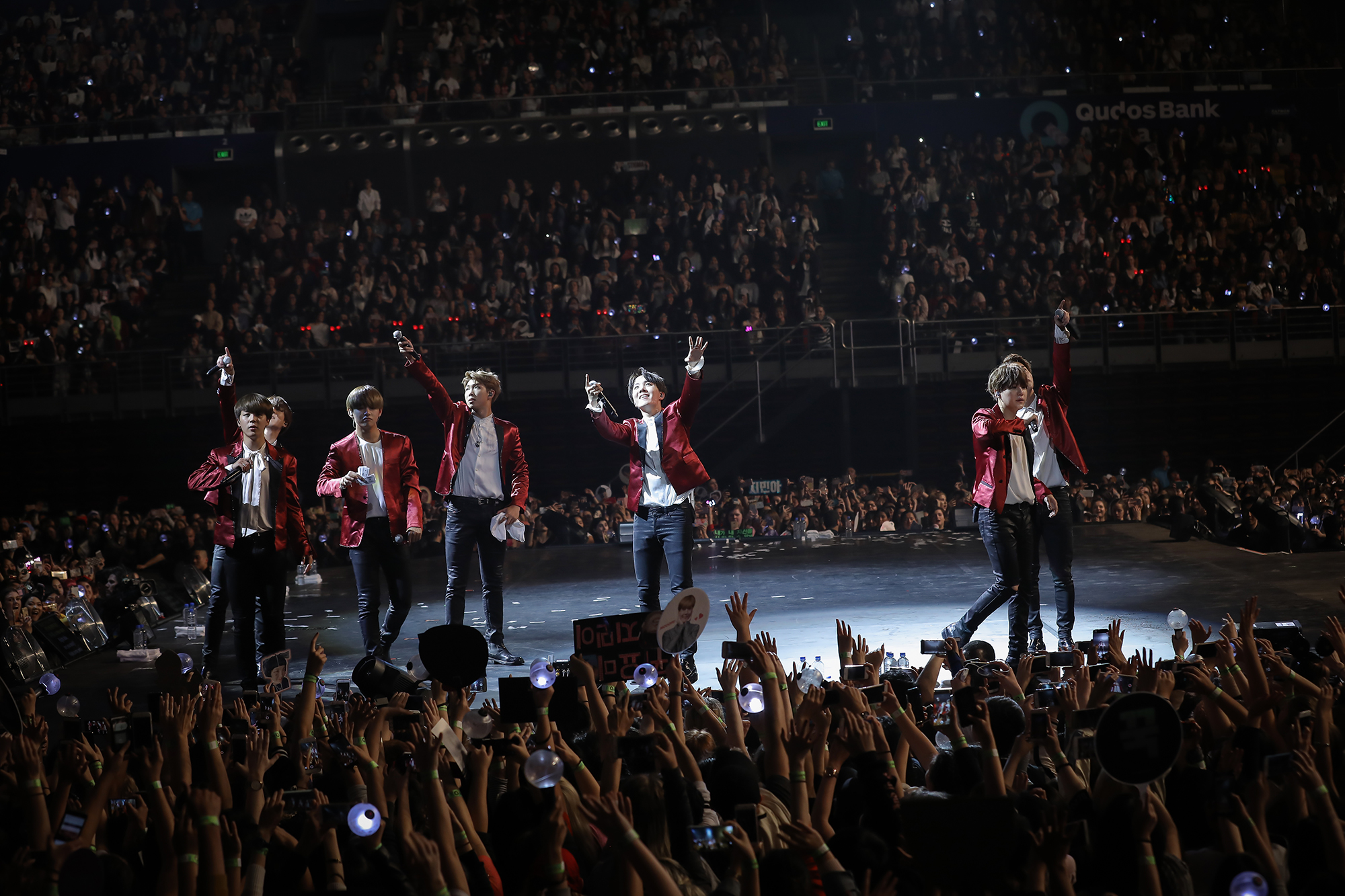 “Sydney will be forever in my heart,” Suga said.

Jin revealed a heart-shaped wristband on his right hand… Followed by another on his left.

Rap Monster gave the longest speech as he is the most proficient member at English.

“This was our first show after the Billboard Music Awards… The grass in Sydney was so, so legit… I want to live in Australia… Maybe I’ll be coming back,” Rap Monster said.

The boys asked who would walk together with BTS after Friday night and ARMY Australia screamed back with bittersweet love. Rap Monster thanked all the Sydney fans for the thoughtful fan projects and fan chants put together. The boys appreciated all the love that ARMY showed them.

It was only two years ago that BTS had come to Sydney for the first time, and yet those 24 months away felt like a lifetime. We can’t wait for BTS to return again!

The BTS Live-Trilogy Episode III: The Wings Tour in Sydney was brought to you by IME, Big Hit Entertainment, CJ E&M, and Award Entertainment Global. The concert was held in Qudos Bank Arena, Sydney.

All images provided by IME. 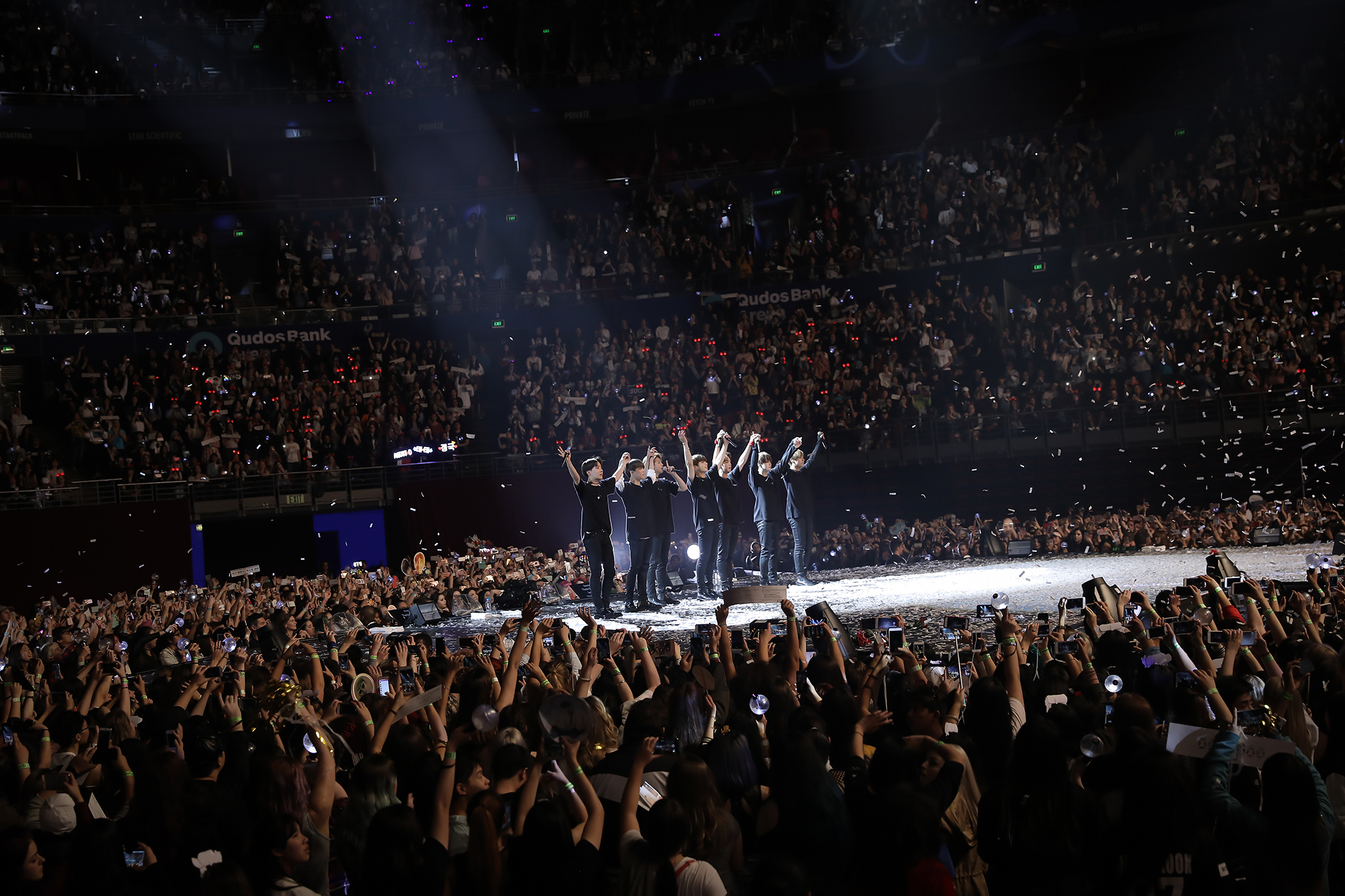 Scroll for more
Tap
K-EXCLUSIVE: Reddy talks to us about filming ‘Supreme’, Netflix life, and his collab dream team!
K-EXCLUSIVE: Is it possible to turn a Korean YouTuber into a K-Pop idol?! Find out in brand new survival series, YOUSTAR!
Scroll
Loading Comments...