On 14th August in Berlin, Germany, the dream came true for hundreds of Tinkerbells who waited for this moment for years and years. Their favorite group KNK was about to have a concert that evening and the excitement was vivid in front of the venue – Kesselhaus. Fans were signing a German flag, giving out bracelets and chatting happily among themselves. As far as one could see everyone was holding a fan with their favorite member, a banner or pink lightstick. 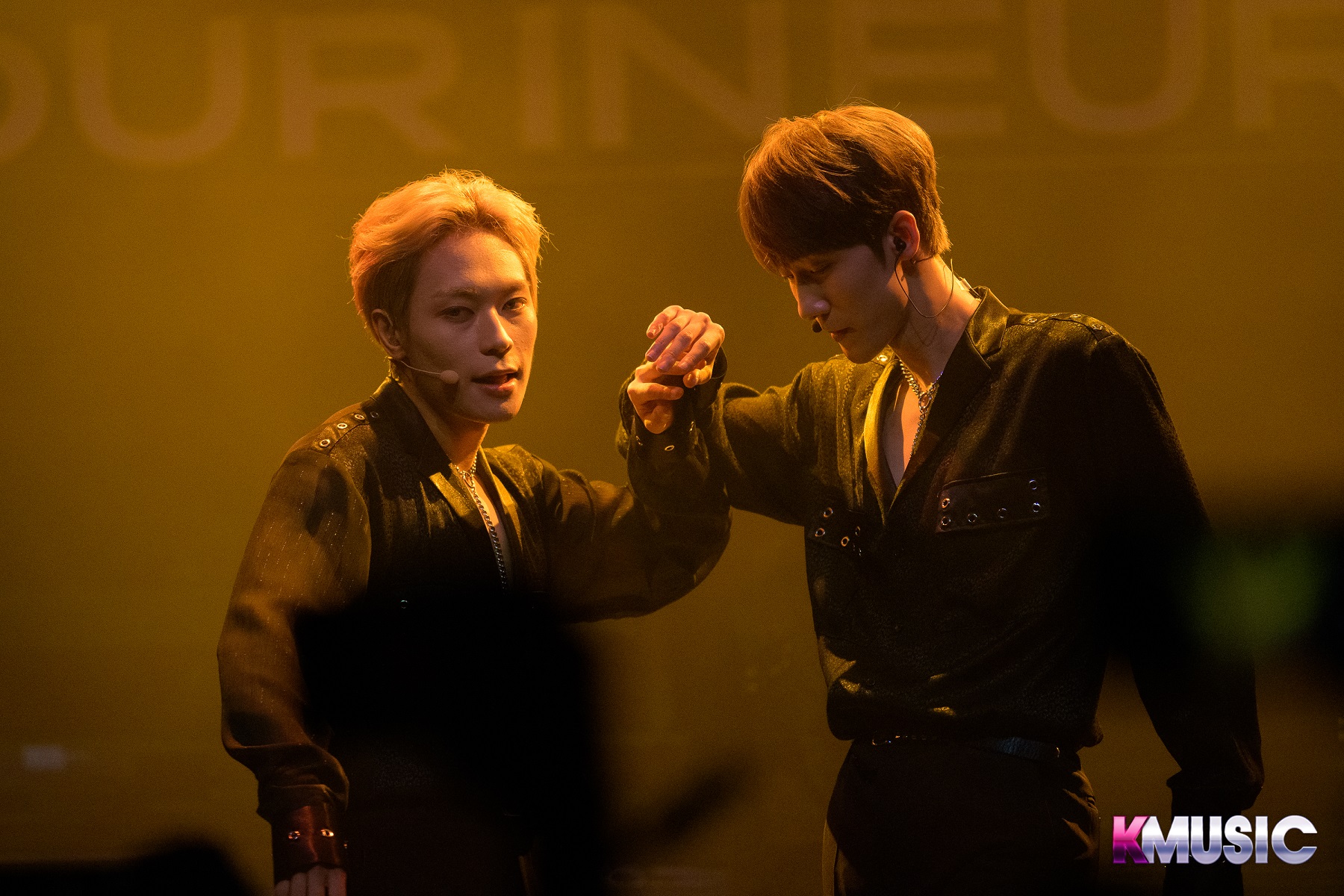 The first song to open the evening was “We are the world“. The group appeared on stage wearing black clothing, looking as fabulous as fans could imagine. They danced in yellow light and the fans screamed hard when seeing their strong stage presence.

When the second song followed up and the members prepared their starting choreography poses the fans already knew what song is going to come next. They fanchanted hard for the “Sunset” song, waving the lightstick to the fast-paced rhythm as well as jumping on spot, fully enjoying this dream. 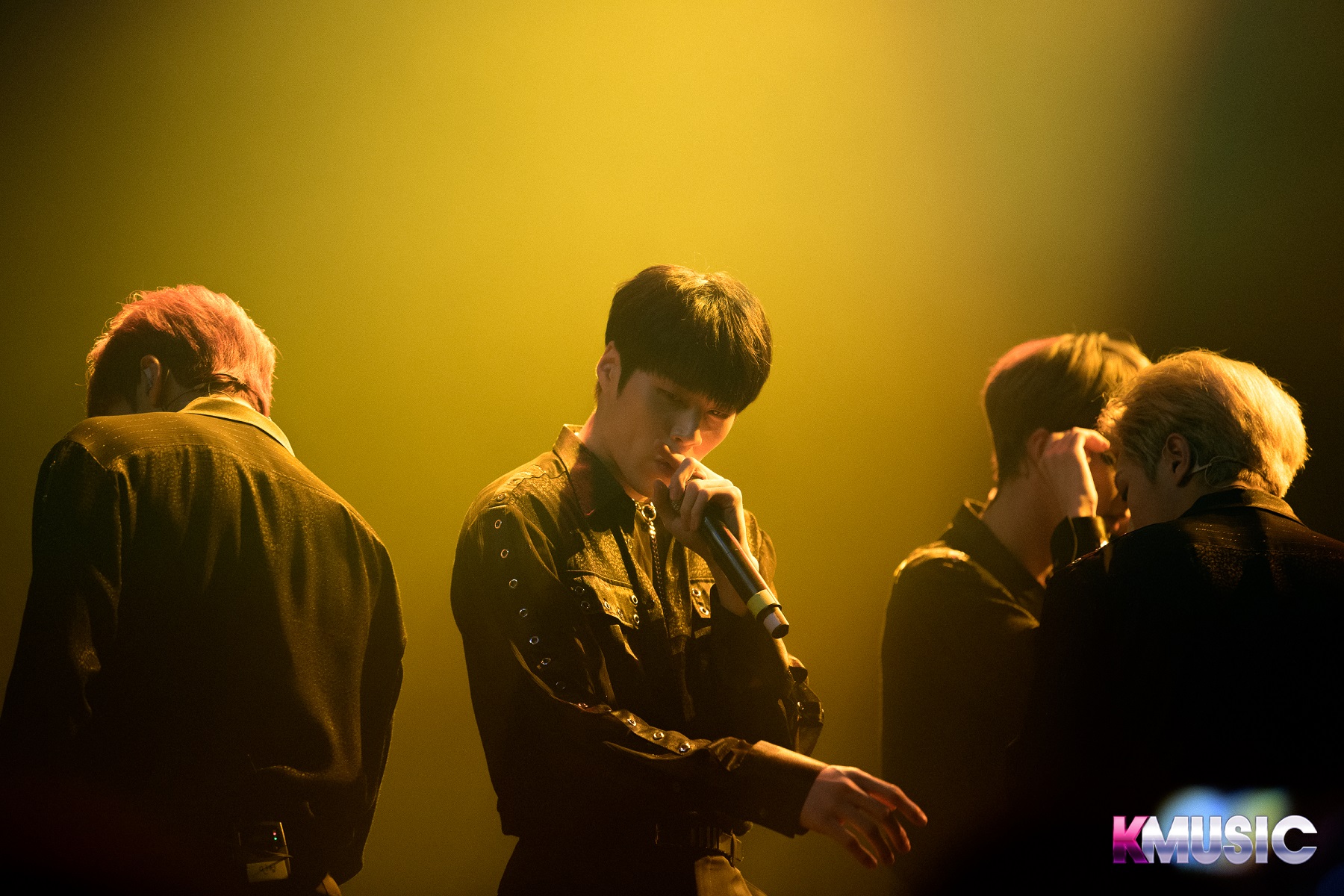 The first MENT came and the members said their introductions to the fans, sending hearts to the crowds and implementing German language to their speeches as well.

Heejun shared that it is their first time stopping in German for their tour and he hopes the fans can enjoy the concert in Berlin. Dongwon continued by saying how happy he was to start the tour in Berlin and thanked everyone who made the time to come and see them. He rounded his speech by making a big heart above his head. Inseong´s introduction was very short, but sweet and it made the fans scream continuously.  Seoham started off with “Guten Abend” [“Good evening” in German] which caught the fans a bit off guard, but it was only a beginning of his short German introduction, making the fans over-joyed to hear their idol speaking in their native language. Jihun, on the other hand, kept it very simple by saying “I am Jihuuuun!” 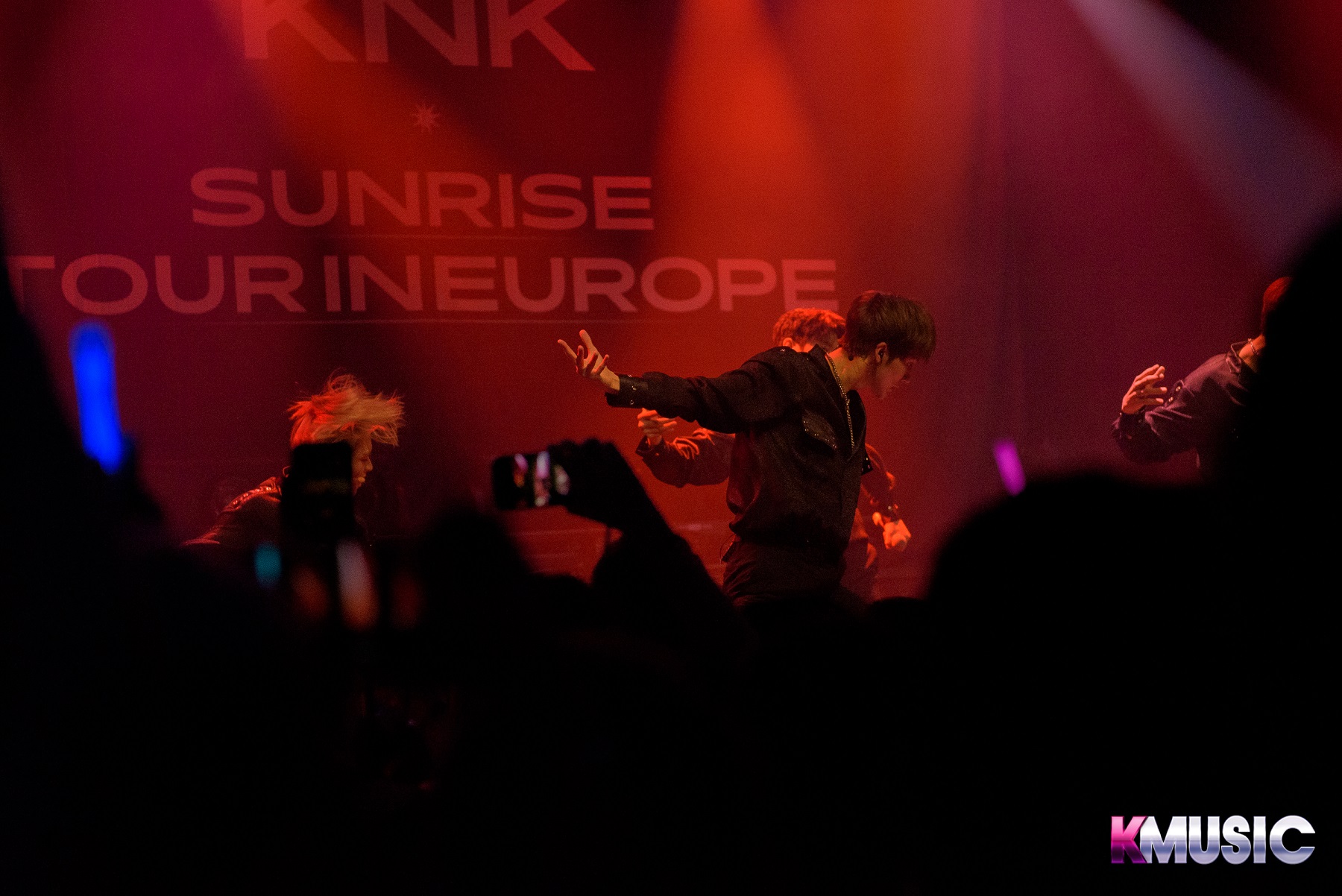 Jihun also made a request towards the fans: „Photo OK, SNS live no no no!“, reminding the fans that it is okay to take photos of them during the show, but they shall not live stream the concert on their SNS accounts. The concert then continued with a letting-go song „Day by day“, a song of longing „Rain“ and „Lonely night“ which shared the same melancholy love feelings theme.

During the next MENT the boys revealed pieces of information with the fans they might not know of before such as the fact that one member´s parents studied in Germany or Heejun´s love for Berlin beer.

Another set of songs followed: „Think about you“, „What do you think?“ and „Remember“. For the first song the guys stepped closer to the fans and placed their microphones into the air for the fans to sing along with them. For the song „Remember“ standing mics were brought on stage. While the members had their hands mic-free, they danced on their own when not singing, were sending hearts to fans or made eye-contact with the Tinkerbells in front of them. 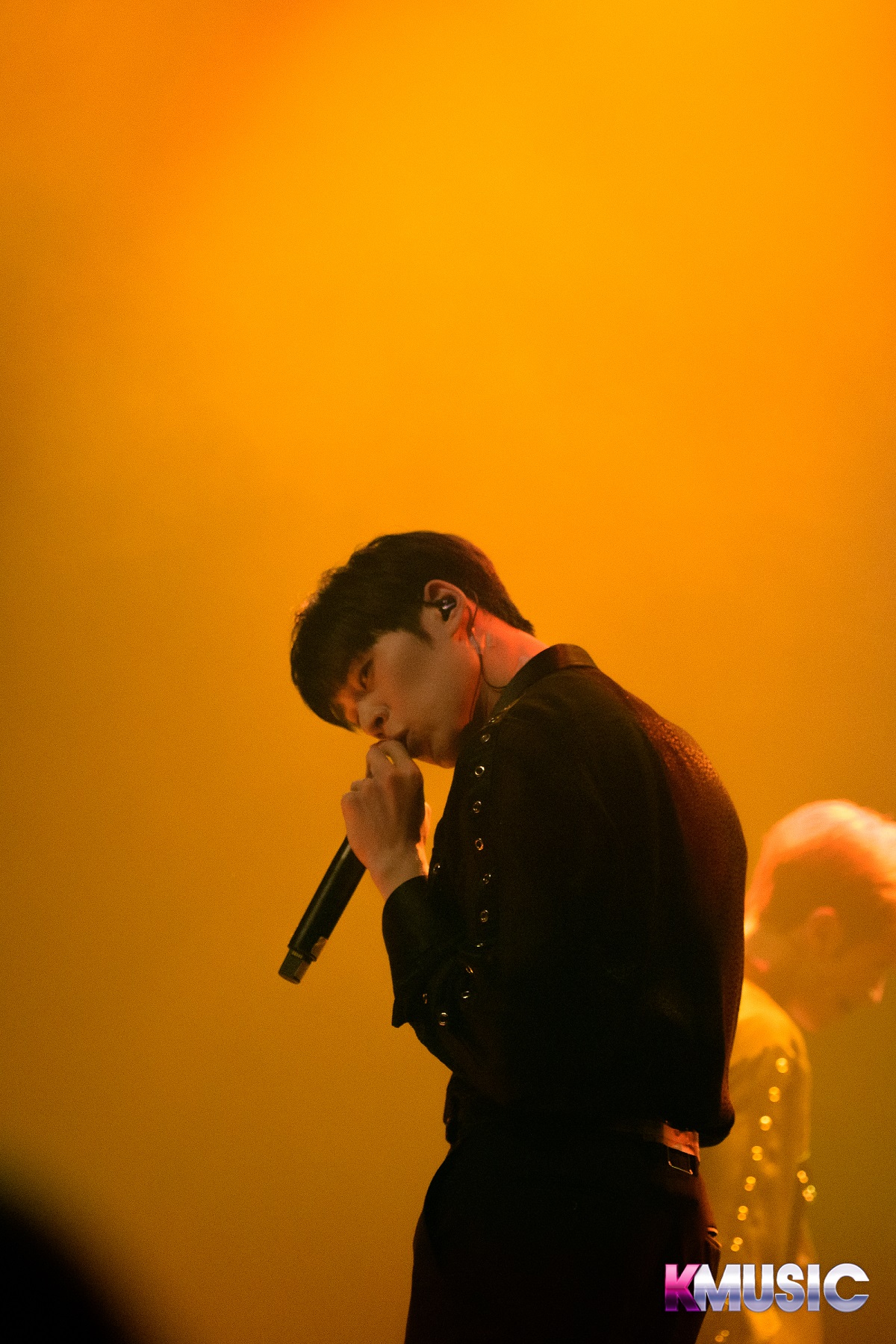 When the next break came the members sung bits of their favorite songs, pleasing the ears and hearts of the fans. Dongwon sung „Falling slowly“ from the movie „Once“. When it seemed he will stop, the fans´ cheers just made him continue on with the song and at the end Jihun finished the song for him with perfect English pronunciation. A few fans wiped away their tears after this song was finished as it was simply that breathtaking.

Heejun decided to sing a part of Coldplay´s „Scientist“ which he called to be a “classic song”. Inseong then performed a song he presented in a show „Mask King“. However his tone went a bit off and the members made him stop, pretending it never happened they turned back the time for Inseong to start all over again. And for the second time they fully approved of his performance, giving him a round of applause together with the fans. Seoham performed a song we did not, unfortunately, caught as the fans were cheering so hard for him while he did his little performance and by being accompanied with a beatboxing sounds of other members, it was hard to catch the song´s name. However, we can say that his performance received a huge well-deserved response from the crowd! 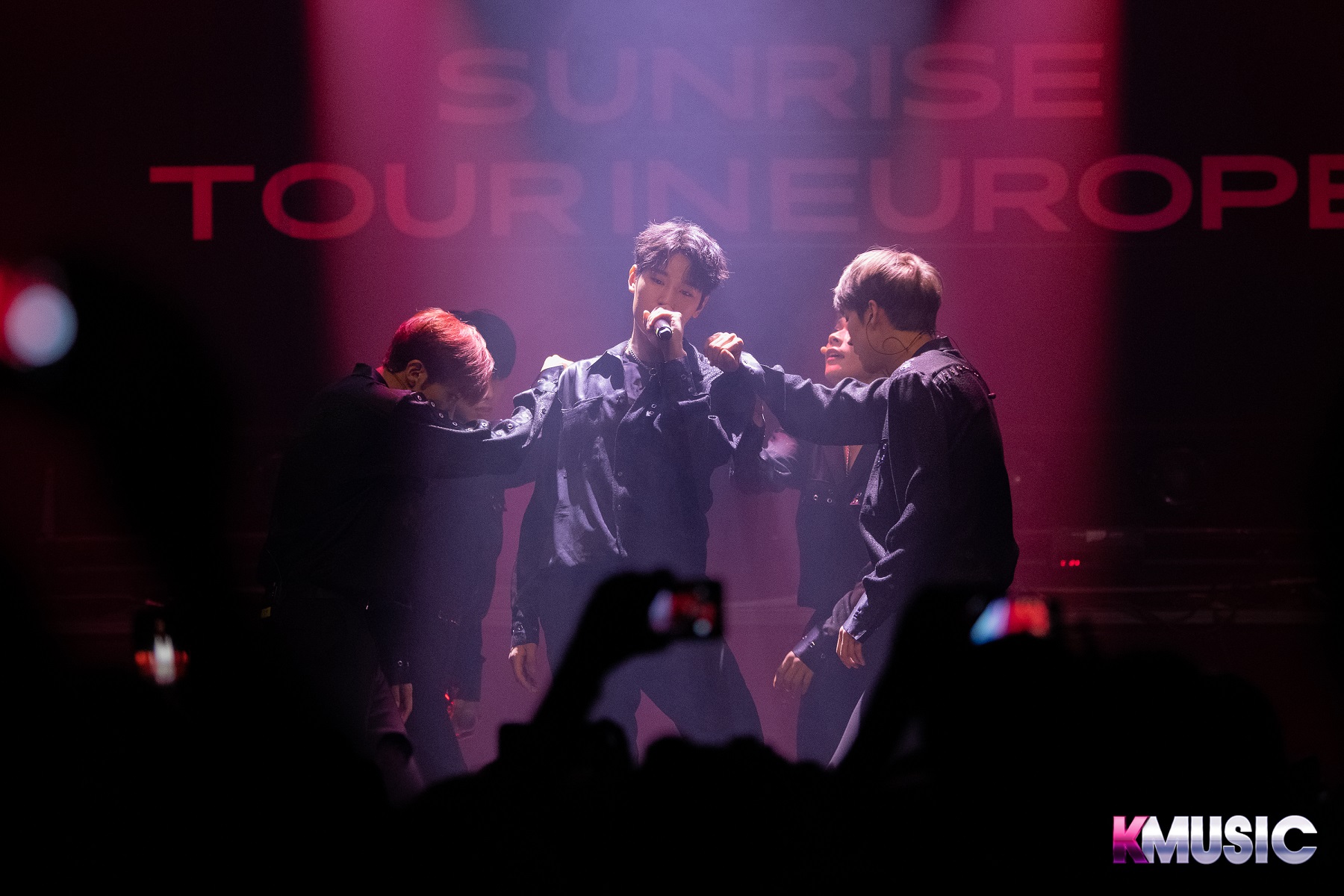 The next set of songs was made to make everyone go a bit crazy. KNK danced with passion and enjoyment, accompanied by the fans´ loud chanting it was a roller-coaster of jumping, screaming and living in the moment. After „Tonight“, „Feel so good“ and „Beauty“, the boys said they have a surprise for the fans.

KNK prepared gifts for the fans so during the following talk break they each called out a random number and ticket category. The fans picked were encouraged by the members to dance for a bit and after that they were promised a one-of-a-kind Polaroid photo with the member´s signature on them. These gifts were handed over after the show´s end.

A set of songs following, among them „Fade“, „Sun, moon, star“or „Back again“. KNK then rounded the concert with an encore consisting of songs „Love you“ and „Day n night“. At the end the members took turns to thank all the fans for coming and hinted that after finishing their next album they will happily come back with another tour. They shared their hearts with the fans by saying how thankful they are for the energy they brought with them to the concert. During the encore songs some of the members took fans´ phones and created unique videos from stage, some took hold of the signed German flag and some even borrowed the banners the fans prepared for the concert. It was a night filled with awesome songs, amazing vocals and powerful performances. Tinkerbells had their dreams come true and it was unbelievable how fast the two-hours long concert went by. 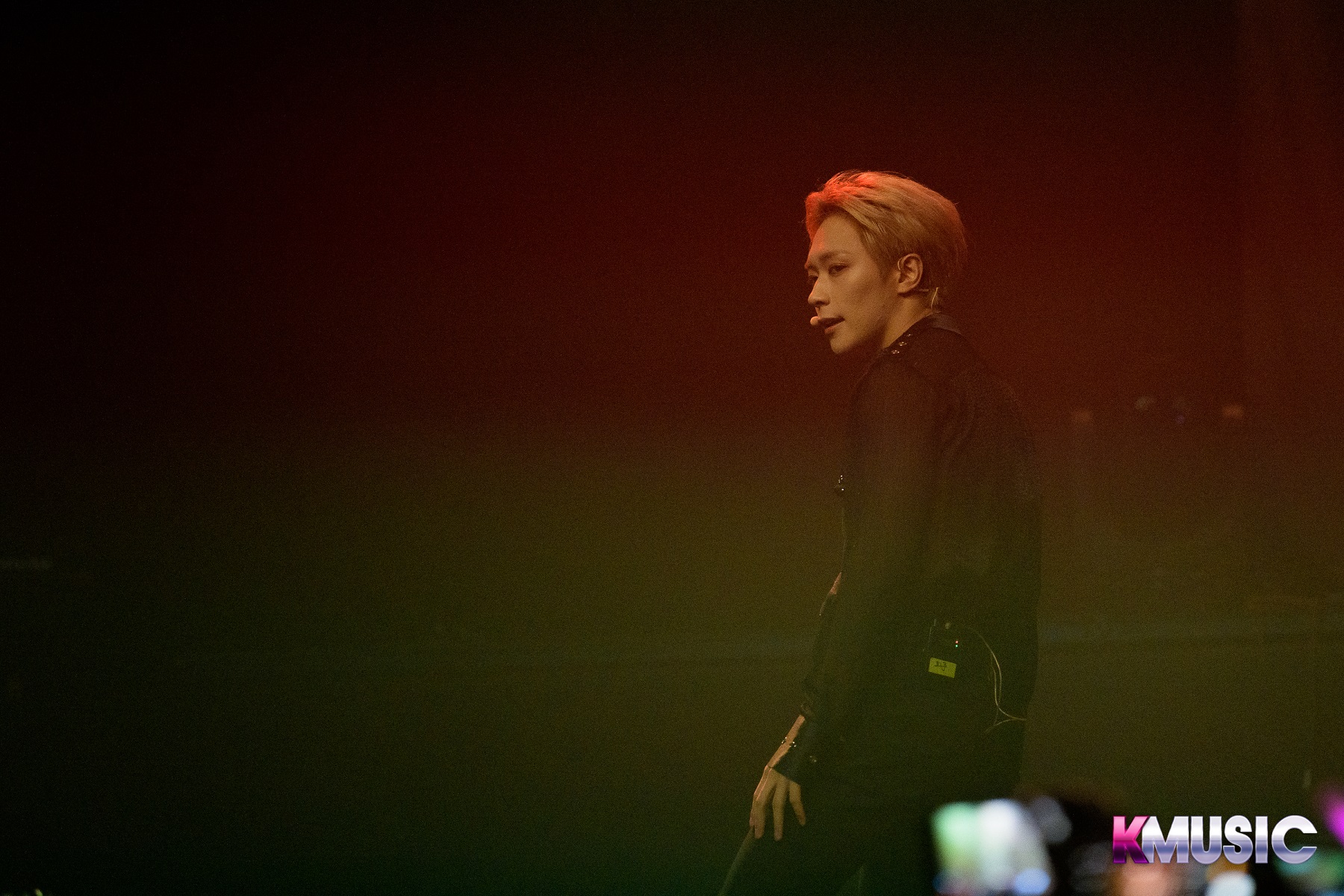 During the whole evening it was obvious just how much KNK enjoy singing and performing their songs and just as much they love their fans. With their heavenly vocals and amazing dancing skills it was a night to remember forever. With this being said, we wish KNK a successful continuation of their European tour and we want to thank MyMusicTaste for bringing this group to Europe!

You can view the full set of photos from this concert in our Facebook page photo album. These photos were made by the one and only By.Zero, one of the best concert photographers in Europe. In case you do not want to miss out of her amazing work follow her at her Facebook and webpage. To get notification about KNK´s next tours and updates about their work follow their Facebook. Want to bring these boys back to Europe? Keep your eyes on MyMusicTaste and vote for KNK.
Photography: By. Zero
Written by: Terry ALS