A total of 16 artistes across 11 Asian countries took center stage at the Skechers Sundown Festival on 22 Nov 2014 at the Marina Promenade in Singapore. Representing Korea at this Asia’s biggest music festival performing to fervent music fanatics was CROSS GENE!

Debuted in 2012 with members hailing from Korea, Japan and China, this is CROSS GENE’s maiden stage in Singapore. The sextet boy band was preceded by groups like Brown Eyed Girls, Teen Top, AOA and BTOB in the past runs of the iconic festival that aims to unite talents and fans onto one singular platform to celebrate the diverse Asian cultures.

Before the big night out with the stars, a press conference was held on 21 Nov 2014 at the Park Royal Hotel. Many artistes came donned in Sketchers Sundown Festival T-shirt, but of course, each brought their own style. 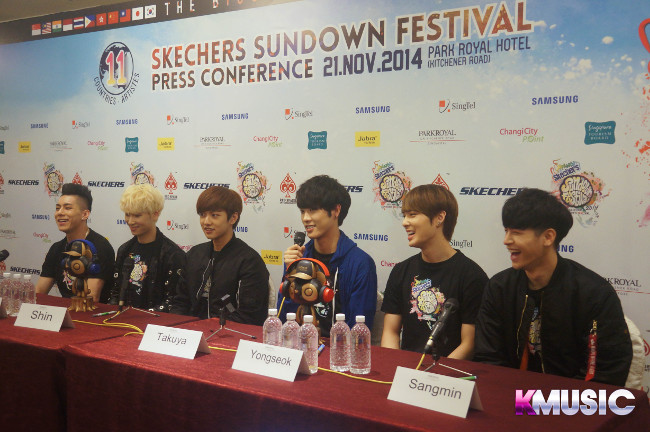 Members Takuya, Shin, Casper, Sangmin, Yongseok and Seyoung, immediately brightened up the session with an invigorating greeting “Hello! We are CROSS GENE from Korea!”

Speaking about the latest comeback, Leader Takuya shared “We are currently busy in Korea with our comeback ‘I’m Not a Boy, Not Yet a Man’. We heard that we have an increasing number of fans in China, Korea and Singapore, and we are very delighted and happy and hope to meet all of you.”

On whether the multinational CROSS GENE will consider recording songs in other languages in addition to Korean and Japanese, Takuya said that while there are no current plans, they do hope to record songs in Chinese to be closer with their fans in China, Singapore and other Chinese-speaking regions. Adding on, the boys quipped “We love Singapore, please invite us here often!” 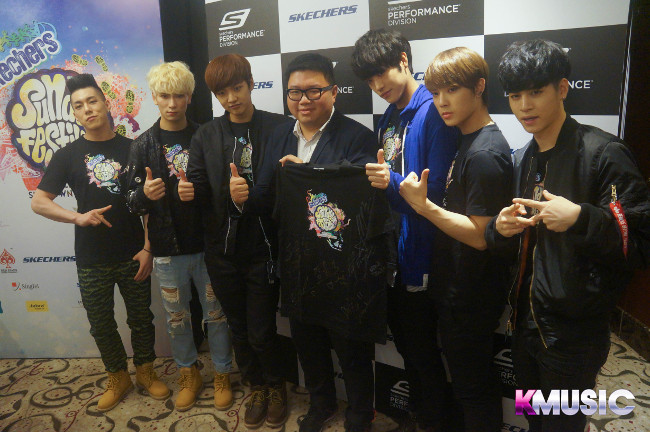 When asked if any Korean artistes had inspired the group, Japanese Takuya recounted how he used to listen to BIGBANG sunbaenim’s music when he was back in Japan. Chinese member Casper also shared that he was invigorated by K-Pop while back in his hometown, which is why he was inspired to go into the industry.

Rounding off, Shin exclaimed, “We are honoured to represent Korea at a great concert like the Sundown Festival, and with so many amazing artistes from Asia. We will put in a lot of effort and please look forward to our performance!”

The arrival of the gorgeous ladies such as TVB actress and singer Kate Tsui from Hong Kong, popular host and DJ Regina Lin from China, Indian songstress Kanika Kapoor, and Singapore’s very own songbird Olivia Ong also heated up the atmosphere.

Known for her soulful vocals, Olivia Ong revealed that she is now back and will be based in Singapore. Having worked abroad for the past ten years, the talented solo artiste hoped to spend more time with her family and looks to begin on a new album. 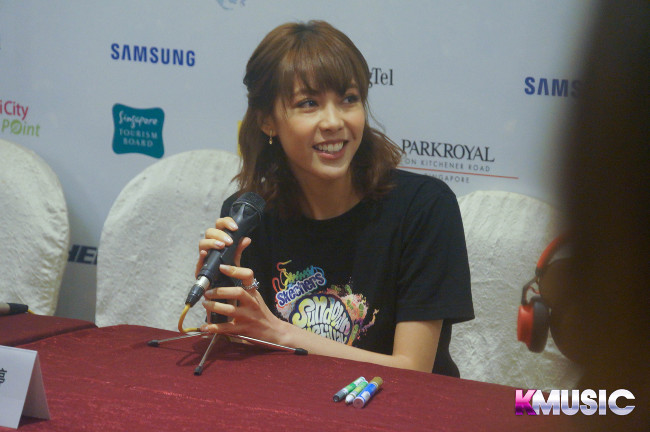 On the contrary, Kate Tsui seemed rather at home, “This is my, I don’t know many times here (laughs). Singapore holds a lot of good moments for me, I was just here a while back for an awards ceremony, I often visits my friends and I love all the food. I have to admit I had midnight snacks last night, some pretty good Laksa!”

Onward to the epic night of the music extravaganza, CROSS GENE kick-started their performance with their latest single ‘I’m Not A Boy, Not Yet A Man’ followed by warm greetings and introduction. Their second song was ‘Crazy’ with Casper calling out to fans hoping to make the crowd go crazy that night. Judging from the roars of cheering, they definitely did! Not missing a beat, ‘naughty’ Shin went on to kiss fellow member Yongseok and that really got fans screaming their lungs out. 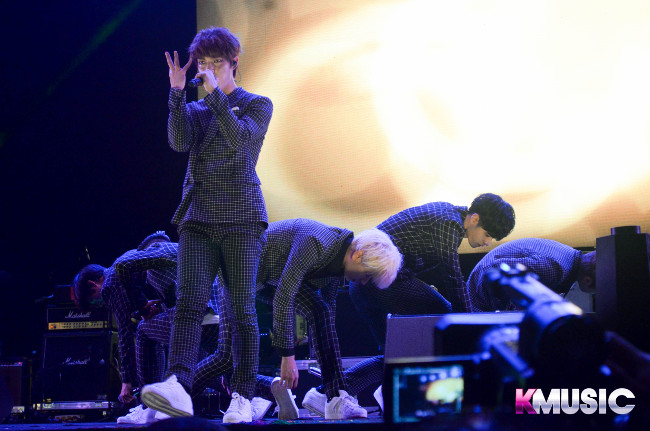 The boys continued hyping up their performance with the ‘On the Floor’, and it seemed that  Casper could not take the heat and eventually took off his blazer to continue singing and dancing to the beats of ‘Shooting Stars’. CROSS GENE concluded their short but spectacular set with ‘Dirty Pop’.

True to its name, the single platform of Sundown Festival really brought the fine artistes from all around together. During the encore performance, there were numerous interactions between the two boy groups, WEAVER and CROSS GENE, even though only four members Shin, Seyoung, Casper and Sangmin were back on stage. Following the performance, Casper also expressed interest on Instagram to collaborate with popular Malaysian singer Shila Amzah while Shin gave the singer a copy of their autographed album. Who knows, fan might be able to look forward to CROSS GENE’s first cross-border collaboration! 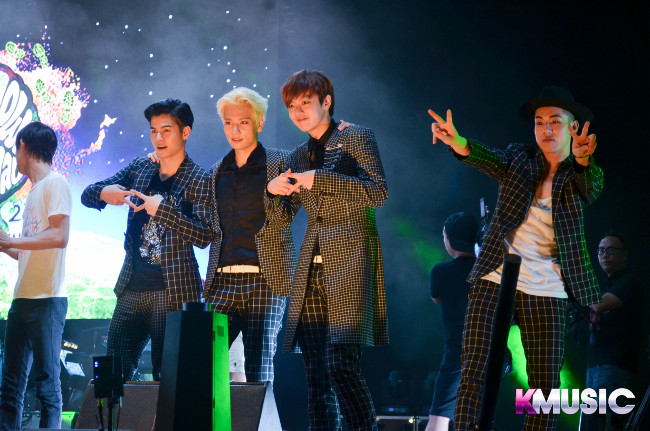 Let’s anticipate CROSS GENE’s upcoming happenings and having them back in Singapore like they hoped. Officially KMUSIC also had an interview with the boys. Stay tuned for updates!

Officially KMUSIC would like to thank Skechers, Red Spade Entertainment and Press Kit Pte Ltd for the great invitation.

Scroll for more
Tap
B.A.P Suing Their Company for Termination of ‘Slave Contracts’
CIPHER Show’s the Throne is His For The Taking with His Dynamic Rapping Skills
Scroll
Loading Comments...